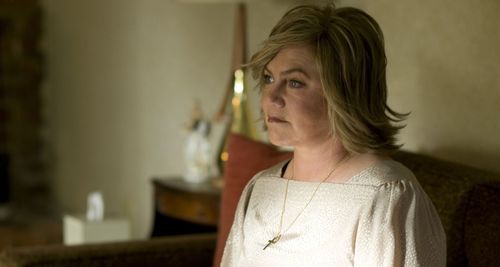 “The Perfect Family” means well enough, but it’s a hopelessly scattered picture attempting to cover a lot of emotional ground in 80 minutes. A story of enlightenment and religious concern, the movie is a grab bag of subplots and characterizations, failing to gel into a cohesive whole despite a clear passion for the messages presented from director Anne Renton. At least there’s Kathleen Turner, who delivers a spunky performance that carries the feature, showing signs of life onscreen she hasn’t reveal in ages, helping to slow the erratic storytelling momentum that comes to destroy any lasting message of personal illumination the material is hoping to impart on the viewer.

A devout woman aiming to make a difference in the world through her close ties to God, Eileen (Kathleen Turner) has been nominated for the “Catholic Woman of the Year” award, in competition with Agnes (Sharon Lawrence), an aggressive church member. Looking to impress a visiting archbishop with her idyllic home life, Eileen is horrified to find her family in complete disarray, with daughter Shannon (Emily Deschanel) expecting a child with her lesbian partner, son Frank Jr. (Jason Ritter) abandoning his family to pursue local women, and husband Frank (Michael McGrady) still trying to live down his past as an alcoholic. Attempting to keep order in a family of sinners, Eileen struggles to maintain her faith, fearful that her dark past has made her a hypocrite as the days tick down to the awards ceremony, gunning for a prize of total absolution.

“The Perfect Family” is a movie about many things, yet the effort doesn’t reveal much intricacy in the early going. Introducing Eileen as a standard church lady with an amazing capacity for generosity and a firm commitment to prayer, the picture begins as expected, with the lead character dropping hands-clasped to her knees when the going gets tough, depicted as an artificially sunny woman with profound faith in heavenly help, also managing some slapstick in fumbled communion wafers while trying to keep her cool around Monsignor Murphy (Richard Chamberlain). The opening act of “The Perfect Family” is deceptive, launching the story on a sitcom note of dysfunction, with Eileen viewed more as a schoolmarm to be stymied than a dimensional character.

Once the cracks in Eileen’s so-called “perfect” family begin to show, the feature begins to take on far more than it can handle, revealing the mother’s discomfort with Shannon’s lesbian lifestyle, with decades of Catholic teachings smothering her instinctual motherly love. “The Perfect Family” is ultimately about the power of tolerance, finding Eileen caught between the demands of her religion and the needs of her heart. While the message is lovely, it requires a journey through tedious melodrama to absorb in full. Miscarriages and talk of abortions also enter into play, swerving what was once a light film of comedic discomfort into the oncoming traffic of real life. Further weight is applied through Frank Jr. and his public infidelities, and the ongoing struggle of humiliation and guilt emerging from Frank Sr. There’s also a running mystery of sorts with Eileen and her suspicious drive to acquire the absolution prize at the end of the “Catholic Woman of the Year” campaign trail, with tragedy from long ago finding new urgency as the mother faces just how human her family is. 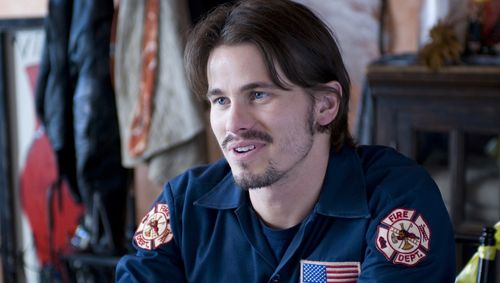 With an impatient tonality to the effort, “The Perfect Family” ends up all over the place, lunging for laughs and tears. Renton doesn’t have the experience to juggle the moods properly, losing the poignancy of the material along the way. However, this is a kind film with a big heart, aiming to use caricature as a way to challenge intolerance, articulated wonderfully in Turner’s vivid work, her first starring role in well over a decade. She brings consideration and reflection to a confused picture, shaping a nuanced performance out of a role meant to be played as broadly as possible. She’s terrific, but “The Perfect Family” doesn’t know quite what to do with her energy, eventually taking on so much surplus woe, there’s no chance for a clean exit.