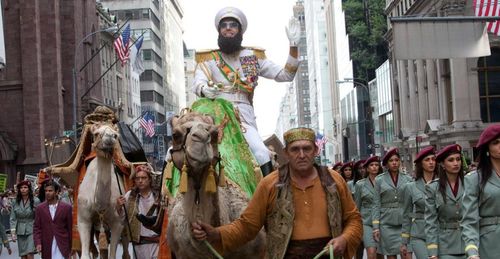 At this point in his career, Sacha Baron Cohen has done one thing with his starring roles, and he’s done it well. With “Ali G Indahouse,” “Borat,” and “Bruno,” Cohen has set out to explore stereotypes and challenge prejudices, while making a silly mess out of every room he enters. He’s a gifted performer with fantastic chutzpah, but “The Dictator” feels a little tired, a little too calculated to create a few ripples of controversy. It’s a broad creation taking a whack at dissecting Middle East and North African culture and political tyrants (the movie is dedicated to Kim Jong-il), but the bubble gum doesn’t hold its flavor for very long. Perhaps its fatigue with Cohen’s comedic impulses or some good old-fashioned lazy writing, but “The Dictator,” while occasionally hilarious, is mostly flat and uninspired.

As the supreme ruler of the North African Republic of Wadiya, Admiral General Aladeen (Sacha Baron Cohen) rules with an iron fist and little intelligence. A spoiled brat trying to turn his country into a nuclear power, Aladeen decides to provide a show of force, heading to New York City to speak in front of the United Nations. Soon after arrival, Aladeen is kidnapped by a U.S. Government official (John C. Reilly) who strips him of his authoritative, all-holy beard. Now out on the streets where no one will recognize him, Aladeen receives assistance from an ultra feminist/activist/grocery store owner, Zoey (Anna Faris), who helps him rebuild his life. Watching from afar, Aladeen witnesses confidant Tamir (Ben Kingsley) using a body double (and total idiot) to represent Wadiya, leading the nation to peace and equality. Teaming up with Nadal (a scene-stealing Jason Mantzoukas), a former Waydian nuclear scientist, Aladeen sets out to reclaim his power, only to hopelessly fall in love with Zoey and his life in NYC along the way.

Inspired by the twisted saga of Saddam Hussein and assorted gaudy dictators, Cohen builds a very specific target of satire with his latest effort. Making fun of monsters, the star walks into the lion’s den, satirizing the lifestyle and arrogance of those who’ve essentially declared themselves God, wielding power and terror to control the oppressed masses. Of course, “The Dictator” is a comedy, and a taboo-smashing one from Cohen, who loves to moonwalk into unnerving areas of comedy. Examples? Aladeen plays a Nintendo Wii game that simulates beheadings. In a helicopter ride over New York City, the former despot and Nadal accidently scare an American couple into thinking they’re planning another 9/11 terrorist attack. When addressing his people on the state of Wadiya’s nuclear power, Aladeen can’t help but crack himself up when mentioning how the breakthrough will provide a new source of energy, stopping just short of naming Israel as his first target for annihilation.

Cohen likes to provoke (anti-Semitism being his favorite target), and “The Dictator” offers plenty of sticky punchlines and situations that create discomfort without the release of laughter. The picture is so focused on razzing Hussein types and regional troublemakers, it loses a precise focus of parody, with the script often resorting to randomness to sneak in and out of scenes. Autocracy is a juicy subject, and one that resonates with the entire world, yet Cohen, along with director Larry Charles, resorts to bodily function humor and sex jokes to nail laughs. Admittedly, a few of these adventures, chiefly Aladeen’s first experience with masturbation, are quite funny, but there are an extraordinary amount of duds lying around “The Dictator.” I admire Cohen’s desire to remain as silly as humanly possible, but there’s no lift to the material. Once Aladeen, caught on a zip line between two buildings, decided to lessen his body weight by defecating on pedestrians below, it’s obvious the script could’ve gone back for another rewrite. Or three.

The feature rides more evenly when detailing Aladeen’s adventures with Zoey, watching the brute (who gives himself the fake name “Allison Burgers”) forced into customer service, dealing with fellow refugee employees and his boss’s ultra-liberal stance on everything. Again, Cohen loves to incite disgust, pushing the envelope with palpable glee. One birthing excursion is a particular curiosity, with Mr. Burgers and Zoey sharing a tender moment of hand-holding while wedged inside a pregnant woman. It’s random, but most of the effort rides that line of haphazard tastelessness, generating a greatest hits vibe over a steady narrative, with the Tamir subplot offered little direction as the movie advances to a climax.

The gross-outs don’t work, but Cohen eventually coughs up some wit, concluding the picture with a sniper shot to the heart of American absurdity, as Aladeen recalls the highlights of government decisions over the last decade, a list that doesn’t sound all that different from a Wadiyan dictatorship. It’s a stinger “The Dictator” could’ve used more of. I’d gladly accept additional splashes of acid over all the exposed penises and birth canal POVs.