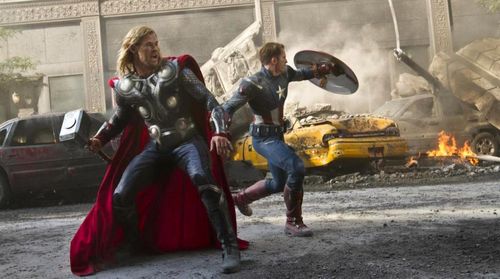 After years of insides jokes, cameos, hints, and calculated introductions, it’s finally led to this. “The Avengers” pays off a promise made in 2008’s “Iron Man,” bringing together Marvel’s greatest superheroes (and two question marks) for a battle to save the Earth, after they’re done pummeling one another. A mildly clunky but largely soaring presentation of citywide devastation, costumed hero neuroses, and flamboyant evildoing, the feature gathers all the details and character quirks fans could want from a super-sized outing such as this. And who better to direct than a man with practically his own religion in the realm of geeklandia, Joss Whedon. Every ticket should come with a tube of smelling salts to keep the target demographic from passing out.

Loki (Tom Hiddleston) has returned to power, aligning himself with a fierce alien race known as the Chitauri, hoping to use the power of the Tesseract to invade Earth and enslave humanity. While his early efforts to secure the power cube involved hypnotizing S.H.I.E.L.D. Agent Clint Barton/Hawkeye (Jeremy Renner) into service, Loki finds himself blocked from further mayhem when Agent Nick Fury (Samuel L. Jackson) launches the Avengers Initiative, teaming superheroes and faithful allies to fight a common foe. Making up the squad is Tony Stark/Iron Man (Robert Downey, Jr.), Dr. Bruce Banner/Hulk (Mark Ruffalo), Steve Rogers/Captain America (Chris Evans), Natasha Romanoff/Black Widow (Scarlett Johansson), and Thor (Chris Hemsworth). Despite tensions and secretive motivations dividing the group, the Avengers must learn to work together to thwart Loki’s devious plan of global conquest, using combined powers, rage, and intelligence to rise up and defeat their powerful enemy and his relentless army of alien aggressors. 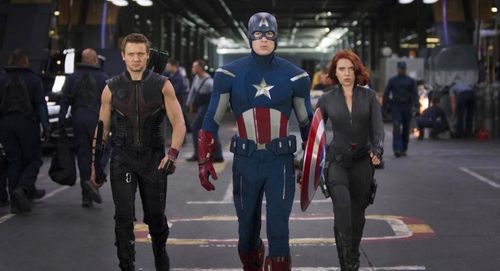 As to be expected when dealing with a multitude of iconic characters, “The Avengers” is one stuffed burrito of a motion picture. Not only must an original plot be established to introduce a worthy conflict for the heroes, but most of these figures of justice require an update since their last adventure. This leaves the opening half of the script sprinting forward with Loki’s rise to power as he clears a power cube runway for his space overlords, while the rest of the time is devoted to dissecting sensitive superhero headspace, catching up with the likes of the recently thawed Steve Rogers, who’s having trouble acclimating to contemporary society. There’s Tony Stark too, growing domesticated with assistant Pepper Potts (Gwyneth Paltrow) while working to perfect a sustainable energy plan using arc technology.

Every major personality receives time in the spotlight, as Whedon and co-writer Zak Penn make a herculean effort to bring together these forces of nature with a clean understanding of trepidation, finding each member of the team greatly unnerved by Loki’s scheme. Bruce Banner’s journey is especially interesting, with “The Avengers” rebooting the good doctor for a third time since 2003. Well played by Ruffalo, Hulk’s second banana position is ideal for such a tragic figure, challenging the production to articulate the doubt and turmoil raging within Banner without the need to stretch simplistic internal instability over two hours. Here, the doctor is a troubled man housing a dark impulse, while Hulk is displayed as beast of fury gradually finding an attitude of heroism, with plenty of HULK SMASH! action worked into the viewing experience. A few of his scenes are sure to elicit standing ovations. 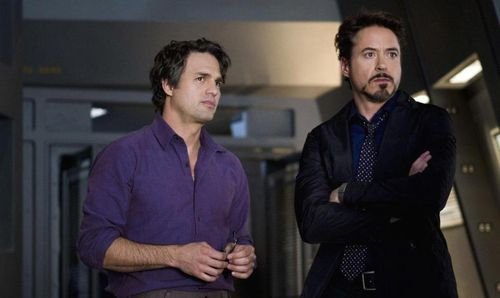 It’s rather remarkable how well Whedon manages the chaos, establishing a crisp story of alien invasion while massaging conflicts within the group, staging a few hero vs. hero fight scenes that highlight the not-so-friendly competition between these strangers. Thor is particularly troubled in this script, displaying the God of Thunder as a conflicted man, torn between the defense of his adoptive home and his commitment to the safe return of Loki back to Asgard for a proper rehabilitation. It’s an emotionally loaded subplot that doesn’t exactly get its due, yet remains tangible due to the Hiddleston and Hemsworth’s snarling commitment to the toxic reunion. With so much to juggle, including the interests of S.H.I.E.L.D personnel (Cobie Smulders and Clark Gregg co-star), it’s a wonder anything gets accomplished in “The Avengers.” Credit must be paid to Penn and Whedon, who knit a fresh adventure out of dangling plotlines, creating a distinct comic book tone to the effort, with larger-than-life acts of bravery and transport (the good guys take refuge in a flying aircraft carrier) punctuated by distinct superhero charisma radiating from the majority of the cast.

While richly imagined, “The Avengers” hits a few sour points, primarily attached to the character of Barton/Hawkeye. Introduced in a cameo appearance during 2011’s “Thor,” the archer has little external flair to keep up with the rest of the squad -- guys who can command lightning, inflate into green monsters, and fly through the sky. There’s not enough for Renner to do besides look tough and fling arrows, making Hawkeye rather lackluster when it comes to the business of tormented heroes. Romanoff/Black Widow also suffers from a lack of ornamentation, but there’s more of a strategy angle for Johansson to play with, leaving her position on the team secure. Hawkeye is never developed to satisfaction, while only reaching fringe status once the Avengers reach their action potential. Also surprisingly ineffective is Downey, Jr., who always feels like he’s playing a parody of Tony Stark, with the spaz-billionaire’s baiting attitude taking on massive theatricality without much emotional weight to balance out the smarm. Downey, Jr. is quippy and fittingly rude to his fellow knights, but satisfying wit is missing. The actor reaches greater potential when Stark is urged into a leadership role, finally accepting his place among this oddball team. The finale takes to the streets and skyscrapers of New York City (a tired setting for the ultimate showdown), where the Avengers begin to exercise their teamwork abilities to successfully repel the Chitauri invasion. The sequence is enormous, with a few bravura shots providing a sense of scope to the superhero resistance, sold with incredible visual effects -- the Hulk’s attack blasts are worth the price of admission alone, joining the fray in a comfortably exaggerated manner. The action is intense and extended, keeping track of the Avengers as they unite and scatter, hitting such thrilling notes of unity, it’s easy to forget the film’s occasional faults. And true to the Marvel universe, a few seeds are planted for further development in future sequels and personal adventures.

With such a high-flying spirit and big screen heft, it’s difficult to imagine anyone walking out of “The Avengers” unsatisfied. Whedon and his team have pulled off an impossible task, juggling ego and backstory with flair, introducing the world to a united front of superheroes while most of these characters are still in the midst of their own individual narratives. It’s an enormous picture, supplying requisite jolts of courage and contemplation with panache. Lose Hawkeye, and the inevitable sequel will surely attain the orgasmic rush of funny book consistency missing to a certain degree here.