Film Review - Sound of My Voice 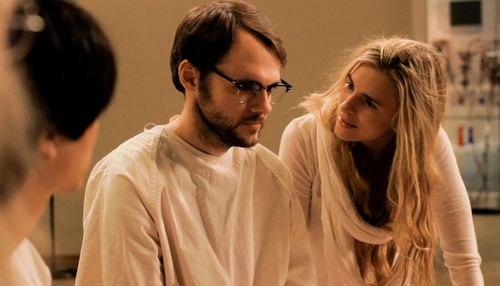 Despite a punishing pace and a few lukewarm performances, “Sound of My Voice” still manages to preserve a beguiling mystery. Credit the screenplay by Zal Batmanglij (who also directs) and co-star Brit Marling, who layer in subtle twists and confrontations, keeping the picture semi-alert as it works its way to an unsatisfying ending. Although deeply flawed, “Sound of My Voice” does hold attention, creeping along with unnerved characters as they inadvertently find themselves on a journey of science fiction, struggling to separate reality from manipulation in a feature that enjoys the dramatic possibilities of both approaches.

Gearing up with spy cameras, schoolteacher Peter (Christopher Denham) and ex-socialite Lorna (Nicole Vicius) are a couple committed to infiltrating a cult led by the enigmatic Maggie (Brit Marling, “Another Earth”). Claiming to be a visitor from the year 2054, Maggie has amassed a following of needy souls searching for leadership and psychological purging. Hoping to build a case against the evasive woman, Peter and Lorna instead give their souls to the time traveler, finding her gifts of observation and verbal therapy to be overwhelming, threatening their journalistic intentions. As the couple becomes increasingly intertwined in Maggie’s teachings, Peter is eventually asked to provide more of a sacrifice than he’s prepared to give, finding his curiosity greater than his common sense.

The subject of cults and hive mind behavior is a juicy one for Batmanglij and Marling to explore. The premise of “Sound of My Voice” is riveting, introduced through early scenes of creepy submission, watching Peter and Lorna work through hygiene demands and secretive transport to meet with Maggie, which ultimately requires knowledge of a secret handshake to complete. The initial scenes of discovery set a compelling tone for the feature, supplying an enormous sense of the unknown, finding Maggie to be a sickly woman with a wild story to share, hoping to lead her followers to an unknown destination of inner peace and futureworld comfort. While they’ve set out on this journey to debunk a fraud, Peter and Lorna are soon confronted with Maggie’s delicate probing and perceptiveness, unsure if they can fully write her off as a porcelain charlatan.

“Sound of My Voice” carries a distinct independent film appearance, with a concentration on loaded silences and unanswered questions, captured with a flavorless HD look and banal locations (Maggie’s holy realm of time-jumping serenity is a carpeted suburban basement). Most of the production’s heft is carried in the writing, erecting an intriguing magnetic pull around Maggie, finding the barefoot leader urging her followers to literally barf up their insecurities and fears (homegrown apples being a potent symbol of sinful seduction Batmanglij returns to repeatedly), instructing them to devour earthworms to test their trust, and refusing any challenge to her teachings. The latter is a particular struggle when Maggie sings “Dreams” by The Cranberries as her example of music from 2054, a moment that snaps Peter and Lorna back to reality. “Sound of My Voice” does get lost milking atmosphere, with a glacial pace and allegiance to dramatic stares that dilutes potent scenes of connection, yet the central drive of confusion remains intact, nicely articulated in Denham’s performance. Marling doesn’t quite have the all-encompassing charisma to communicate Maggie’s allure, but she makes for a satisfactory question mark.

Subplots with a mysterious schoolgirl (Avery Kristen Pohl) and an investigative woman (Davenia McFadden, in a welcomingly forceful turn) contribute to the mystery at hand, inching the characters toward bad decisions, promising a more satisfying conclusion than what’s actually offered here. Of course, “Sound of My Voice” is littered with answered questions and unknown backstories, creating a mood of confusion that remains unsorted. I’m not asking for a definitive resolution concerning Maggie’s authenticity, but something more fulfilling wouldn’t have hurt the feature’s interpretive aura. I suppose it’s a testament to the power of the script that I wanted to follow the story further, yet “Sound of My Voice” exits bluntly, with little sense of achievement after 80 minutes of enigmatic clues, assumptions, and miraculous experiences. It’s a film about faith vs. instinct, and much like Maggie herself, there’s not much in the end that rewards such concentration on seemingly enlightened events.