It’s almost impossible to decode the true intent of “LOL,” which is such an obnoxious and baffling viewing experience, clouding whatever teen angst authenticity it was striving for. A remake of a 2008 French feature starring Sophie Marceau, the original picture’s writer/director Lisa Azuelos has returned to helm the American take on the war between teens and adults, perhaps best qualified to film material she’s already tackled before. The challenge proves too insurmountable for the creator, with her update a choppy, confused observation of growing pains and adolescent insubordination, executed with a bizarre obliviousness to the toxicity of these characters and their extraordinarily superficial concerns begging for sympathy.

Lola (Miley Cyrus) is a teenager dealing with insecurities and hallway melodrama, trying to keep her head clear with help from best friend Emily (Ashley Hinshaw) and Kyle (Douglas Booth), her pal/crush who’s trying to hit the big time with a band his father despises. Facing troubling rumors about her sexual history, Lola vents to her diary, scribbling down concerns while attempting to survive the daily business of being a teenager. Futilely trying to offer guidance is Lola’s mother, Anne (Demi Moore), who’s dealing with her own juvenile turmoil, trying to raise a disobedient daughter while navigating relationships with her ex-husband (Thomas Jane) and James (Jay Hernandez), a narcotics cop trying to get something started with the harried woman. With a big devirginizing trip to Paris with her class on the horizon, Lola struggles to remain sane while facing humiliations and misunderstandings that threaten to scare Kyle away. 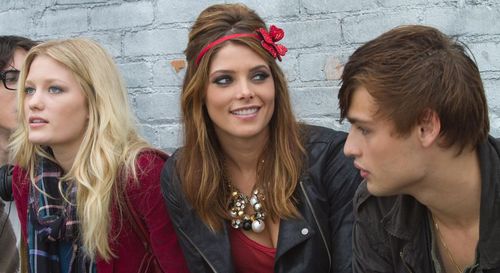 Having never seen the original “LOL,” it’s difficult to assess how well this second pass reworks the material. However, it doesn’t take a previous viewing to sense that something is severely off about the 2012 film, which is so slapdash and often nonsensical, it’s difficult to comprehend the intricate emotions Azuelos is working to communicate. The major problem with the picture is the general unpleasantness of every character, reaching beyond normal adolescent and single mom irritations to grow as truly abhorrent personalities, utterly self-absorbed and cartoonishly irrational. Granted, Azuelos could be after an honest representation of current generational woes and entitlement issues, but there’s nothing here that reinforces such a precise psychological study. Instead, the material establishes Lola and Anne as shrill leeches, while the rest of the teen characters show little care for the world around them, treating bad grades as a personal parental attack and easily solvable spats as total communication breakdown. There’s no sense of human nuance in “LOL,” just tiresome clichés performed by pretty people, because in this world there are no freaks and geeks, just young model types with perfect hair, pronounced cheekbones, and runway fashion sense, removing any chance the production had of being relatable.

“LOL” works up a sweat trying to capture a contemporary wireless atmosphere of texting and instant messaging, with communication reduced to internet slang and bickering. It’s an absurdly melodramatic film (Kyle’s father smashes a guitar Townshend-style when frustrated with his son’s defiance) and never meaningful, remaining artificially bothered when probing around the teenage mind, finding Lola an especially dim character of purely surface needs. “LOL” is lacking a soul, jumping all over the place to tend to the concerns of supporting characters and product placement, losing a crisp narrative of development and self-awareness. Attempts are comedy are just plain gross, catching Emily using a raw chicken to simulate the inside of her vagina for a cam show stranger, and there are a few moments near the end of the effort that feature Lola’s classmate making fun of a mentally challenged girl. These are not characters anyone should be spending 90 minutes of their lives watching. 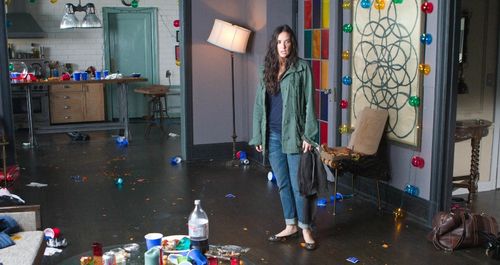 “LOL” remains quite dreary for the most part, though Azuelos attempts to liven up the proceedings when the gang visits Paris, clearing way for a travel montage that includes fitting room antics and a fountain romp in front of the Eiffel Tower -- just in case anyone forgot the group was in France. The bad ideas extend to Lola and Emily’s host mother, who feeds the girls sheep brains while devoting her house and firstborn to the triumphs of Joan of Arc. It’s all so awkward, almost from another movie entirely.

True hilarity is found in the finale, which supplies a happy ending for everyone involved, regardless if their story actually achieved closure or not. Most disconcerting here is Lola, who ends exactly where she begins, having learned nothing about herself beyond an insincere “just be yourself” message crudely worked into the denouement. Instead of challenging young audiences with a display of self-worth and maturity, Lola remains a crummy teen obsessing over boys and more attractive girls, addicted to the nonsense that is her life. Anne is equally repellent, doing a great disservice to the art of stressball mothering.

Actually, “LOL” is a lot like an episode of “Gilmore Girls,” only the mother and daughter are total creeps and the characterizations are completely insulting.