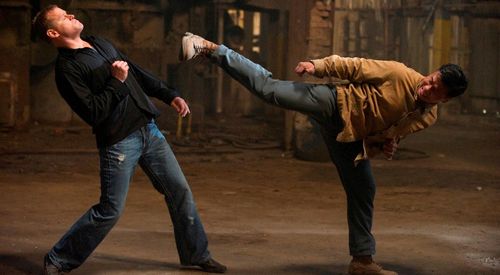 A few years back, I reviewed “Universal Soldier: Regeneration,” which was technically the fifth installment of the tired series, leading to minimal viewing expectations. Instead of a snoozy actioner, director John Hyams (son of inconsistent helmer Peter Hyams) refreshed the franchise with a shockingly stout effort, returning some firepower back to a flatlining futuristic concept, also replacing a few blown light bulbs in Jean-Claude Van Damme’s marquee value. Unfortunately, the excitement was only fleeting, with Hyams’s latest, “Dragon Eyes,” a tepid fight picture that’s too reliant on chaotic moviemaking elements to make an impression, creating noise where a thrilling revenge saga should be. Where “Regeneration” showcased a filmmaker ready to pound some life into dreary formula, the ugly and bafflingly dull “Dragon Eyes” revels in cliché, slowly falling asleep despite some gratuitously violent content.

Hong (Cung Le) has come to the town of St. Jude on a mission. With the community facing a debilitating criminal epidemic, Hong is ready to clear out the trash, challenging two gangs for control of the streets. When Hong proves himself successful, his efforts trigger interest from local crime boss Mr. V (Peter Weller), who offers Hong a position as his right-hand man, keeping order while unsavory business carries on in private. While finding appreciation from the locals, including neighbor Rosanna (Crystal Mantecon), Hong is driven by a greater purpose, haunted by his past, using training and teachings provided by prison guru Tiano (Jean-Claude Van Damme) to help him on his quest to rid St. Jude of wickedness. 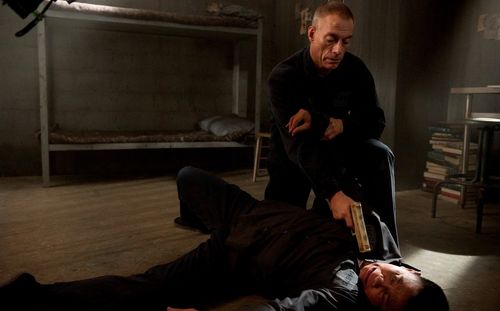 "Dragon Eyes” is a gang warfare picture with a pronounced martial art attitude. The screenplay by Tim Tori submits roughly 30 minutes of actual story, leaving Hyams to beef up the remaining hour with style and brutality, working to conjure a western-like atmosphere for the feature as Hong sets up shop in St. Jude, eager to stomp out criminal activity within the city limits. The movie is repetitive, fascinated with gang braggadocio and the criminal machinations of Mr. V, while tending to Hong’s secretive heartache and his development behind bars under the tutelage of Tiano. Hyams plays with time, winding through the lead character’s violent education and implementation of street justice, which involves numerous encounters with cartoonish thugs, each handed a screen introduction despite utterly formulaic characterizations and squealing performances.

Outside of Mr. V’s idea to rework his criminal endeavors after Hong reveals his ability to take on entire gangs with his feet and fists, there’s really nothing to “Dragon Eyes,” which shuns any emotionally charged motivations to drink in brute posturing and banal backroom dealings. This leaves the heavy lifting to Hyams, who proceeds to soak the movie in style, with hyperactive editing nudging the fisticuffs along, while the visual scheme elects a highly processed look of sickly greens and queasy browns, giving into tiresome low-budget moviemaking trends. The soundtrack is also deadening, aiming more for abrasion than atmosphere, pumped full of cruddy rap music to lend the film an attitude it doesn’t otherwise earn on its own. “Dragon Eyes” is unappealing to watch, and without an invigorating story to follow, it’s also quite uneventful. 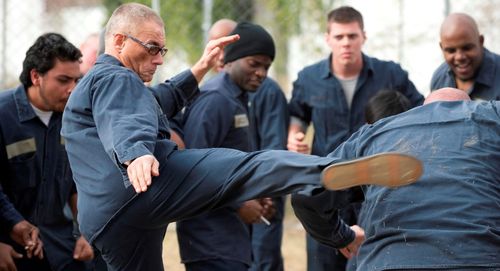 For those showing interest in “Dragon Eyes” due to the participation of Van Damme, I’m sorry to report the actor is only here in a small supporting role (almost a cameo) despite his top billing. It’s a low-key performance from the action star, with Tiano the Obi-Wan figure to Hong, teaching him to withstand pain and confront his demons, with Hyams shooting the actor in shadows to maintain his mystique. Van Damme’s presence is missed, but I suppose that’s why Weller was cast as the villain, bringing a needed sense of volatility to a film that’s all about staring contests. It’s an amusing performance that basically leads anywhere Weller is interested in taking it, lighting up the production with a playful sense of intimidation and, eventually, extreme paranoia, once Hong turns his attention to the true cancer of St. Jude.

“Dragon Eyes” should build to a shattering conclusion of broken bones and bullet-riddled bodies, but Hyams doesn’t have the imagination to bring the material to a boil. Instead, we’re treated to a warehouse showdown where every character is suddenly rendered a complete idiot, thus allowing the film to stumble to an ending. Truthfully, the deflating climax doesn’t exactly tarnish a strong cinematic effort, exiting the feature on a note of moviemaking survival the rest of the picture was clearly working towards.