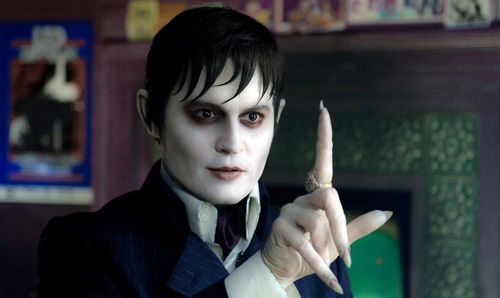 The process of abridging a daytime soap opera that ran for over 1,200 episodes down to a single two hour picture is not a simple task, and while I only have a fringe appreciation for the “Dark Shadows” television program, it’s easy to see director Tim Burton has handled the translation to the big screen with a great degree of care. Unexpectedly macabre (it’s not exactly titled “Happy Shadows”) with a flexible funny bone, the feature film update of the cult show bares it fangs with some success, likely unnerving those on the hunt for a slapsticky good time. Although burdened with far too much story and one too many supporting characters, “Dark Shadows” is a solid return to form for Burton, who creates his most measured and atmospheric effort in quite some time.

Raised to lead the influential Collins Family in the late-1700s, Barnabas (Johnny Depp) is swayed by his love for Josette (Bella Heathcote), a pairing that angers jealous witch Angelique (Eva Green). Cursing Barnabas by turning him into a vampire and burying him alive, Angelique sets out to destroy the Collins legacy through business, growing into a powerful fishery magnate. 200 years later, Barnabas is finally freed from his coffin, set loose in the year 1972, where the world has changed and the Collins brood has been thoroughly defeated, wasting away inside the family castle. Bonding with matriarch Elizabeth (Michelle Pfeiffer), Barnabas looks to rebuild the brand name, hoping to motivate Roger (Jonny Lee Miller), Dr. Julia (Helena Bonham Carter), young David (Gulliver McGrath), and teen Carolyn (Chloe Grace Moretz) into action. However, this dysfunctional family is difficult to inspire, while Barnabas faces the unsavory task of sating his thirst for blood, also confronted with Angelique, who’s returned to seduce him once again. 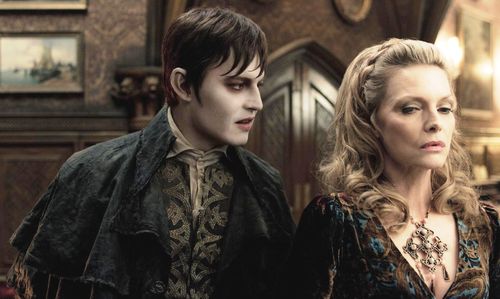 With 2010’s “Alice in Wonderland,” Burton unearthed his biggest hit with a lavish retelling of Lewis Carroll’s immortal tale of crooked fantasy. However, while box office records were set, the director’s creative imprint was lacking, finding Burton forcing his whimsy on the material, creating a visually overbearing, witless endeavor that often felt like parody of a Tim Burton picture. “Dark Shadows” brings the helmer back to the far reaches of the night, taking on the wobbly legacy of the original show (which ran from 1966 to 1971) with a big budget upscale. Not bad for source material that was known for its horror highlights, committed performances, and painfully cheapy production values.

The screenplay by Seth Grahame-Smith does a surprisingly robust job preserving the gothic overtones of the daytime program, launching the film with a straight-faced introduction of Barnabas’s journey, establishing his doomed love affair with Josette and his run-ins with the vindictive Angelique, stacking the top of the feature with suicides and vampiric doom, setting an ominous tone for the rest of “Dark Shadows.” Missing is the fanciful Burton touch that’s expected with Johnny Depp (this being their eighth collaboration), which hit a musical high in 2007’s “Sweeney Todd.” “Dark Shadows” plays matters with a forbidding atmosphere, which is exactly the right tone for such idiosyncratic material.

The marketing for “Dark Shadows” promises more of a romp than what Burton’s is offering here. While there’s comedy with Barnabas’s introduction to the 1970s, finding the vampire bewildered with the E.R.A. movement and various Me Generation complications in the Collins household (also showing trouble determining Alice Cooper’s gender), the overriding tone here is one of horror, observing the head vamp feeding on the blood of hippies and using his hypnotic powers to draft innocents into submission. “Dark Shadows” shows more confidence with sinister business, bringing out the best in Burton’s visual mastery (the Technicolor blood is a highlight), summoning a few spooky scenes and an evocative feel for the family home, a cavernous, cobwebbed fortress that recalls the creepiest sections of Disney’s “Haunted Mansion” theme park ride. “Dark Shadows” never rises to a full gallop when pursuing eeriness, but the feature is most certainly not a boisterous comedy, faithful to the program’s sense of menace and ghoulish ambiance.

In his most pleasurable performance since setting the world on fire as Captain Jack Sparrow in the original “Pirates of the Caribbean,” Johnny Depp is a delight as Barnabas, paying tribute to the late actor Jonathan Frid (who originated the role and cameos here) while adding his own spin on the part, offering a mildly cheeky, startlingly committed performance of theatrical line readings and pitch-perfect facial reactions, while using sublime make-up work to communicate the character’s tortured soul, blended with a touch of old-world courtesy. He’s a total hoot, locating defined beats of bewilderment and bravado to play, mixing well the large supporting cast, which includes Jackie Earle Haley as Willie, an alcoholic caretaker. Also amusing is Eva Green, a French actress fumbling an American accent, but ideally alien for the role of Angelique. Green is such a strange, sensual screen presence, and that mix of oddity and seduction is a perfect fit to Burton’s “Dark Shadows” world. She makes for a flavorful foil. 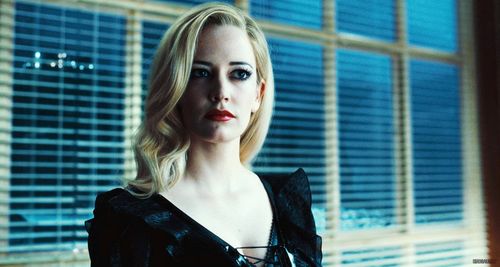 Faltering here is a subplot concerning Victoria Winters (Heathcote), who’s come to Collinwood to be a governess to David. While introduced as a major player in the picture, possessing an uncanny resemblance to Josette and fighting an ability to see spirits, Victoria is gradually ignored by the story, peeled out of the movie’s master plan of romance with Barnabas, leaving a puzzling hole in the plot where something monumental should be happening to our bloodsucking hero.

“Dark Shadows” exits on a bloated note, introducing a blast of CGI to bring especially complicated hauntings to life, losing touch with the film’s practical feel. The conclusion hopes to send viewers off with a stomach full of monsters and mayhem, only to find Burton lost in the chaos, focusing on protracted hellraising between Barnabas and Angelique. The climax (and its promise of a sequel) is exhausting, but doesn’t wash away the pleasures that remain in the rest of the movie. “Dark Shadows” is enchantingly grotesque and a tad irritable, with an endearing commitment to soap opera tempos and thespian exaggeration. Just don’t expect a string of bellylaughs and a garish pantsing of ‘70’s culture, and there’s a great deal of murky merriment to be had, tilted askew by Burton and Depp’s loving, bloodstained hands.