“Bernie” is based on a true story, though many details have been smeared to protect the film’s darkly comic intentions. It’s a small price to pay for a wholly satisfying endeavor from director Richard Linklater, who turns a weird case of murder and manipulation into an almost lighthearted jaunt to the limits of self-control. Anchored by a wonderful performance from star Jack Black, “Bernie” is highly amusing and surprising, contorting a horrible event into a deceptively pleasant viewing experience, filled with laughs and mischievous discomfort. Perhaps the picture is ultimately disrespectful to the facts and tone of the case that inspired the feature, but Linklater’s work here is strangely reverential to community gossip and mental strain.

Bernhardt “Bernie” Tiede (Jack Black) is a charmer living in the small town of Carthage, Texas, carving out a living as a beloved funeral director attentive to every need. Making friends with his devotion to kindness and generosity, Bernie is a shining representative of the town, generating a golden reputation. Extending his company to cantankerous widow Marjorie Nugent (Shirley MacLaine), Bernie befriends a notoriously mean woman abandoned by her family, accepting invitations for world travel and gifts, becoming her inseparable companion. When Nugent’s constant demands begin to wear on Bernie, he shoots the woman in the back, stuffing her body in a garage freezer while carrying on with his spendthrift ways. When the body is discovered months later, District Attorney Danny “Buck” Davidson (Matthew McConaughey) is eager to fry the killer for his crimes, only to find the majority of the community backing Bernie, unable to condemn such a nice guy.

The true story of Tiede’s descent into murder carries an enormous amount of suspicion, proof of sexuality, and unsavory motivations surrounding the death of Nugent. Linklater’s “Bernie” tap dances around the scandalous details, electing to remain upbeat about the whole experience, treating the situation with a sense of blistered playfulness over an oppressively procedural approach. Hoping to blur the line between fact and fiction, the director establishes “Bernie” as a documentary of sorts, using interviews with actors and real Carthage residents to provide a tone of exploration, creating a swirl of trust around Bernie from the people who interacted with the man on a daily basis. The residents extol the funeral director’s care and ease with strangers, his salesmanship skills with coffins, and his thoughtfulness with those in need. Black doesn’t even have to lift a finger to achieve a feel for Bernie’s position in town and the potency of his charms, articulated with a sense of respect to the character of Texas, with its gossip and neighborhood conviction, creating a distinctive feel for the location and its ultimate choice to back a murderer.

Of course, once Black takes command of Bernie, the feature finds its direction. The actor provides measured work in the lead role, skillfully communicating the man’s ease with the world in a few fluid moves, underplaying the question of Bernie’s homosexuality (or no question at all according to Davidson -- Bernie wore sandals), while using his considerable vocal gifts to belt out hymns and show tunes (“The Music Man” being an apt metaphor), flowering the character without dipping into habitual Blackisms. It’s a subtle, restrained performance, also discovering special chemistry with MacLaine, who’s great fun in a devilish supporting role. “Bernie” captures the erosion of the relationship as it slides from companionship to servitude, with Black and MacLaine building a plausible sense of domestic routine, though it’s a bond with possible roots in control and greed. If anything, Linklater successfully articulates the frustrations shared between the two. While the film doesn’t probe deeply into psychological issues, the murderous act is understood without turning Nugent into a complete monster, retaining a sense of humor about the situation without being distasteful. 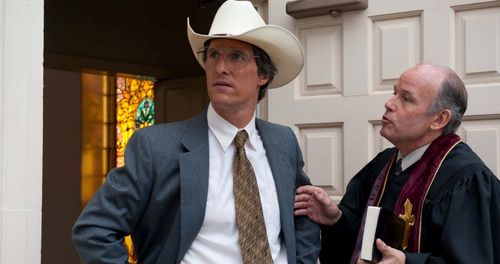 The third act takes Bernie to trial, bringing Davidson’s bewilderment into clear view, shocked to find such sympathy for an admitted murderer, forcing him to work extra hard to secure a guilty verdict. The pace is slowed but the general air of disbelief remains, sending “Bernie” off on a note of justice, served almost regretfully. Although “Bernie” never reaches beyond its grasp, there’s an inherent insanity to the story that’s effectively committed to the screen by Linklater. It’s a true crime effort that almost registers a pure fantasy.