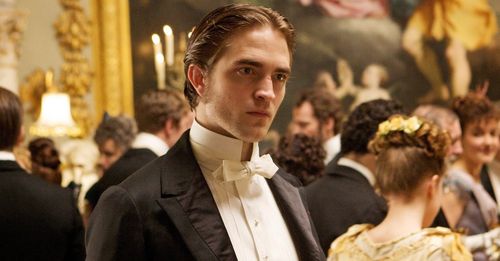 For a film that has such a bustle of visual activity, “Bel Ami” ends up a rather dull feature. It’s difficult to pinpoint exactly why the effort gradually deflates, as there’s a wealth of exemplary technical credits, a story of utter moral corruption, and a few manageable performances. Nevertheless, “Bel Ami” flatlines, abandoning the potential ruthlessness of the plot to wander through a series of vacant reactions to tepid revelations. At the very least, the picture gives star Robert Pattinson something with a little more snap to play, furthering his career as he begins to step away from the comfort of the “Twilight” movies and its most forgiving fanbase.

A destitute ex-soldier scraping by in Paris during the 1890s, Georges Duroy (Robert Pattinson) stumbles into to the opportunity of a lifetime when he greets former comrade Charles (Philip Glenister) in a club, offered the chance to begin again as a journalist with a powerful French newspaper, run by Rousset (Colm Meaney). Striking up a friendship with Charles’s independent wife, Madeline (Uma Thurman), Georges finds the intelligent woman useful in constructing articles, helping him to excel at the paper. To keep himself entertained, Georges takes a lover in Clotilde (Christina Ricci), a connected woman, while eventually tempting Rousset’s wife Virginie (Kristin Scott Thomas) to protect his growing status in town. While world events carry on around him, Georges cannot think past his own interests, using his looks and charm as a weapon to achieve financial stability, while the rest of his life falls apart due to careless bedroom antics. 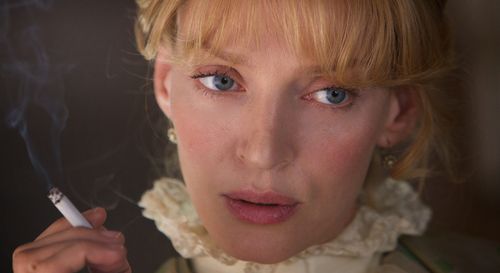 Adapted from the 1885 novel by Guy de Maupassant, “Bel Ami” is a vivid tale of seduction and scheming utilizing the commencement of the Belle Epoque era as a lush setting for such a display of indecency. Directors Declan Donnellan and Nick Ormerod (making their feature-length filmmaking debut) take the atmosphere seriously, ordering up a familiar but nevertheless hypnotic swirl of ornate fashions, urban bustle, and gradual impropriety to communicate the author’s vision for Parisian betrayals. With tightly packed bosoms, a flow of alcohol, and gossip brandished like a blade, the essential ingredients are here to launch “Bel Ami” with an exciting focus on wicked behavior and sexual control. Initial promises toward this narrative direction are not kept.

Sinking into melodrama and tepid interpersonal relationships, “Bel Ami” runs out of gas early on, failing to make Georges’s devilish machinations a more profound viewing experience. Donnellan and Ormerod get stuck in the visual contrasts of the picture, capturing the lead character’s rise from peasant to prince, building his empire on the status and intellect of those he’s sleeping with. It’s an enticing arc, toying with seduction and control, but it rarely provides a thunderstruck quality the material seems interested in achieving, carrying on with a startling sexlessness and inert stabs of betrayal. Much of the dramatic anemia can be pinned to Pattinson, who, despite displays of pronounced forehead veins, delivers a halfhearted performance of rising discomfort. Georges is a cad and a dimwit, but there’s no fire within the man during Pattinson’s interpretation, making his magnetism baffling, especially with Madeline (played feverishly by Thurman), who’s established as a woman of taste and intelligence. However, one look at Georges, and she’s pudding in a tight corset. The electricity of his presence is missing, along with the panic of his charade. 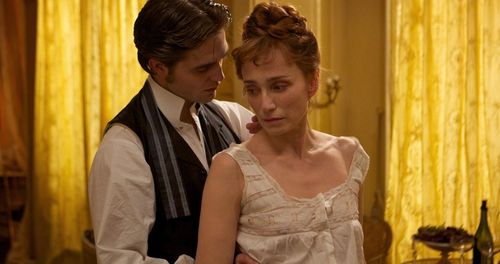 As the violations mount, “Bel Ami” doesn’t rise to the occasion, failing to develop fangs as Georges’s obsession with revenge takes him to the ultimate prize, but one that he refuses to enjoy. The groundwork is there to gift the character a memorable moment of conquest, but “Bel Ami” pulls a few of its most important punches, softening the blow to keep audiences invested in the man’s architecture of exploitation. With such unsavory elements floating around the movie, it’s strange how ephemeral its charms are. Instead of a lasting bite, “Bel Ami” is forgotten soon after consumption.