When dealing with a movie based on a popular board game, there’s some sense of critical relaxation involved. I knew going into “Battleship” that it would be idiotic, hard on the ears, and directed with a lean toward total screen aggression. However, I wasn’t prepared for how noisy and moronic the feature actually is. Tasked with providing summer entertainment on a massive scale, director Peter Berg goes bananas with this production, turning the harmless merriment of kitchen table strategy involving plastic ships into an alien invasion extravaganza, frosted with explosions for the explosions and a 100-pound pop music star in a supporting role as a tough-as-nails naval officer. All hopped up on Michael Bay-brand steroids, Berg attempts to outwit his audience by playing so broadly with a painfully simple concept. It’s a shame almost nothing in “Battleship” comes close to genuine fun.

A habitual underachiever and a burden to his brother, Commander Stone Hopper (Alexander Skarsgard), Alex Hopper (Taylor Kitsch, doing a fine impression of John Wayne) has been signed up for the Navy, with hopes to correct his reckless behavior. Rising in the ranks, yet unable to control himself, Alex is eager to prove his worth during an annual war games celebration in Hawaii, but finds his time in the military, under the command of Admiral Shane (Liam Neeson, cashing a paycheck), is nearing an end, threatening his relationship with Sam (Brooklyn Decker), who also happens to be the Admiral’s daughter. Halting the dismissal process is the appearance of alien ships, which’ve come to Earth to scope out the planet, attempting to signal reinforcements. With part of the fleet locked inside of an alien force field, Alex is left to captain his own vessel, pushed into a leadership role as the enemy opens fire, out to destroy anything that floats in their way. 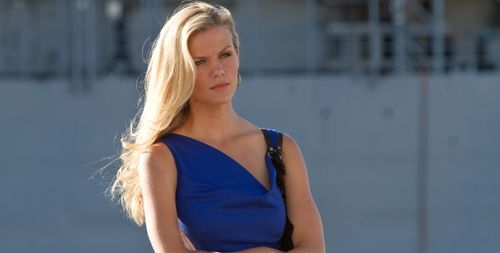 Hasbro, the manufacturer of the game “Battleship,” found remarkable box office success with Bay’s three “Transformers” movies. Combining a cartoon premise with immense CGI-laden action, the robots-in-disguise proved themselves to be a huge draw with audiences, leaving Hasbro with no other choice but to the raid the vaults in search of the next big thing. I don’t think anyone was expecting “Battleship” to be their next production.

Enter Peter Berg, who’s already established himself as a willing conductor of chaos (“Hancock,” “The Kingdom”), making him an ideal choice to bring the literal hit-or-miss experience of the game to the screen. What’s unfortunate about “Battleship” is that it’s completely derivative of “Transformers,” with the features sharing the same glossy look, deafening sound assault, and even creature design, with the hulking aliens, sensitive to sunlight, stomping around in robotic mech suits for protection. While I’m not convinced Berg is in possession of a loaded cinematic imagination, I was hoping for something more impulsive from the filmmaker, who hedges his bets to a certain degree by playing patriotic and inspirational with the material, making time to celebrate war veterans and including a disabled character in Mick (Gregory D. Gadson), a frustrated Army man finding renewed military purpose while out on a therapeutic hike with Sam. It’s respectful, but too calculated, hoping a little rah-rah action might wipe away the fatigue of the screenwriting, which is brewed with awful one-liners, one-dimensional relationships, and a disinterest in the development of the aliens, who look like George “The Animal” Steele and share a similar intelligence when it comes to achieving world domination. 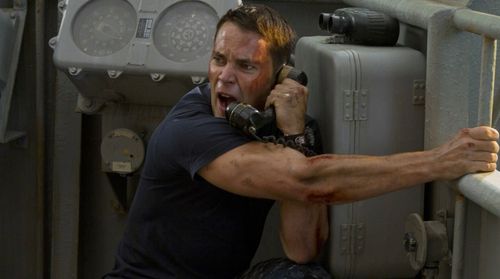 But who really cares about story from a “Battleship” adaptation? Berg certainly doesn’t, spending most of the movie blowing up ships and aliens, the occasional human too. Never fear, superfans of the board game, the picture does make room for a major celebration of strategic thinking, using the movement of tsunami buoys to create an electronic grid for Alex and his ragtag crew (which includes a ridiculously miscast Rihanna) to use for a sneak attack on alien warships, planning their shots with missiles instead of plastic pegs. There’s actual “Battleship” in “Battleship,” which is either the dumbest thing committed to film this year or a most inspired bit of lunacy from Berg. You decide.

The climax cranks up the AC/DC, ups the firepower with decommissioned battleships vs. alien action, and plows ahead with enormous scenes of destruction, giving the “Transformers” a run for its money in terms of sheer noise. “Battleship” is exhausting, but not in a refreshing manner only a miraculously clever blockbuster can provide. It’s more assaultive, without a brain to elevate the experience into something unique. Perhaps it’s misguided to expect a legitimate effort from source material like “Battleship,” but an original approach seems far more appealing than a dopey retread of “Transformers.”