Film Review - We Have a Pope 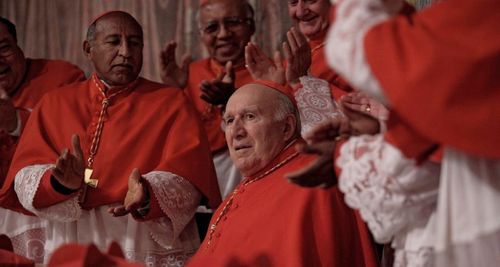 When approaching cinematic investigations into the pope and Vatican affairs, most features take extra caution, often depicting the Catholic authority with a severe attitude befitting such religious and cultural power. “We Have a Pope” doesn’t attempt to deface the organization, but works to understand the clouded headspace of a man suddenly thrust into the spotlight, handed authority and publicity he’s not fully prepared for. The psychological study makes this film special and enlightening, seeking to find a human side to the misgivings inherent in any papal election, creating an uncertain lead character facing unimaginable responsibility, struggling with his fears as the world waits patiently for him to step forward and accept his heavenly duty.

After a death leaves an opening in the papal office, cardinals from all over the globe convene to elect a replacement. Instead of praying for guidance during this tense time of selection, the majority of visiting officials are hoping to be passed over for the job, leaving the burden on Cardinal Melville (Michel Piccoli), who’s chosen as the next pope. Showing immediate panic and resistance to the position, the Vatican brings in a psychoanalyst, Brezzi (Nanni Moretti, who also co-scripts and directs), to help untangle the Pope’s anxiety, urging him to see his ex-wife (Margherita Buy), who’s skilled at confronting childhood trauma. With the Conclave locked down until the pope situation is settled to everyone’s satisfaction, Melville decides to escape, traveling around Rome to clear his head, finding random human interactions helping him to achieve a clear vision of his calling. 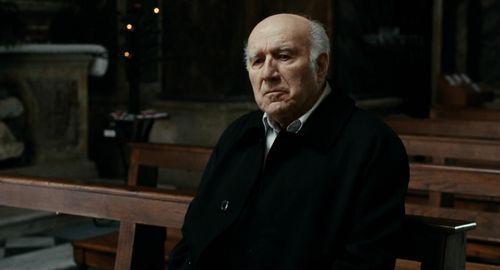 “We Have a Pope” isn’t a full-blooded comedy, but there’s a lightness about it that makes it easy to digest, despite touching on troubling matters related to papal commitment and deceptive Vatican publicity schemes. Moretti keeps the picture relatively breezy, always on the hunt for character quirks and expressive acting that could dilute the potentially negative energy surrounding the premise. What’s intended for laughs is genuinely funny, including a major subplot with Brezzi, growing frustrated with his inability to pack up and leave the Vatican, organizing a volleyball tournament with the international collection of cardinals, pitting nation vs. nation in a battle against boredom.

The sporting asides and a development that finds Vatican reps using a random guard to impersonate the pope (who’s supposed to be locked away in his room resting) contribute a sense of merriment. Yet, “We Have a Pope” is also committed to Melville’s mounting unease with his appointment, observing the terrified man struggling to express his feelings to his fellow cardinals and therapists, unable to fully recognize his apprehensions with the honor. Entering the world anonymously, Melville’s journey through Rome makes up the heart of the feature, studying a confused man as he drinks in civilian life, gathering a portrait of humanity that’s been lost during his years of service. Moretti stages the interactions plainly, with the Pope eventually making his way to a hotel occupied by eccentric actors, using Piccoli’s expressive face as a true barometer of deliberation, keeping tight on this wonderful performance as it moves through multiple shades of thought and hesitation.

“We Have a Pope” has a lot on its mind, with Moretti working to a completely reasonable yet shocking finale that pays off Melville’s quest of self with dignity and honesty, buttoning the picture with a superlative display of storytelling bravery. “We Have a Pope” is unexpected in many ways, with such enticing passiveness giving way to riveting human insight. It’s an amusing feature but also emotionally resonant and expertly performed. The movie treats the papal experience with an atypical honesty and appreciation for the personalities underneath the imposing religious garb, giving audiences a few laughs and a satisfying feel for the trials of those called to an unimaginable level of personal and spiritual commitment.