“Think Like a Man” is an extended infomercial for comedian Steve Harvey’s 2009 book, “Act Like a Lady, Think Like a Man.” There’s no real cohesiveness to the production, which basically stitches together various battle of the sexes shenanigans starring unpleasant characters intended to represent the average man and woman as they play the game of love. When it’s not hackneyed and abusive to the concept of a tender relationship shared between two people, “Think Like a Man” is exceptionally unfunny, utilizing noise instead of wit. In fact, the entire film is one long yelling match whacked up into dreary episodic adventures with personalities who deserve the single life. Harvey’s a terrific comedian and hosts the heck out of “Family Feud,” but when it comes to matters of the heart, the man has perverted passion into a moviegoing event that induces conversion disorder.

Women tolerate men. Men crave stupidity. The mediator is Steve Harvey, selling a best-selling book that’s a guide for ladies to help understand the male mentality, contorting romance into strategy, with the end game marriage and an obedient man. Caught up in the Harvey workshop are dreamer Dominic (Michael Ealy) and demanding businesswoman Lauren (Taraji P. Henson), womanizer Zeke (Romany Malco) and his gun-shy target Mya (Meagan Good), man-child Jeremy (Jerry Ferrara) and annoyed Kristen (Gabrielle Union), and momma’s boy Michael (Terrence J) and disgusted Candace (Regina Hall). Also involved is Cedric (Kevin Hart), whose recent divorce has brought on tremendous confusion. As the women begin to implement Harvey’s teachings, the men feel a subtle manipulation kicking in, urging them to fight back with their own take on the author’s lessons, creating chaos in these tenuous relationships. 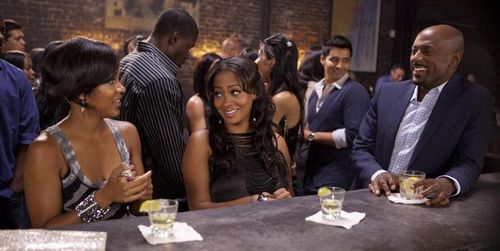 The director of “Think Like a Man” is Tim Story, helmer of the two “Fantastic Four” pictures and comedies like “Taxi” and “Barbershop.” It seems like a considerable challenge to bring a self-help book to life, leaving the production with limited options to help expand Harvey’s work for the big screen. I’m not convinced Story was the right man for the job. “Think Like a Man” plays very broadly, hitting conventional man vs. woman beats viewed in numerous films, with the novelty here being Harvey himself, who magically appears on a random television sets every so often to explain to the audience his philosophy on sex (advising ladies to make men wait 90 days for the “cookie”), the Peter Pan syndrome, and goals for pesky dudes who might not have their every life choice planned out before the second date. While this glorified advice column is coated with comedy, Harvey seems perfectly serious about his role as the Gandalf of modern romance, hoping to wake up female readers with his take on the perfect relationship.

Story doesn’t show a great deal of control over the feature, lacking finger-snap timing when bouncing around the subplots, while Hart is basically unleashed, not directed, spraying his squeaky improvisations over the place like a runaway fire hose. Hart’s comedy also shows curious signs of wear and tear. During the screening I attended, a gentleman seated next to me recited the comic’s one-liners with Hart, reinforcing the lack of punchline freshness on display. “Think Like a Man” can be a silly movie, but it’s also bloated and unfocused, with Story too permissive with the ensemble, who mug like crazy to draw attention to themselves, while a few members of the cast probably shouldn’t have made it past the audition process. It surely doesn’t help to see the actors dealing with rather harsh roles, where women are demanding in the name of dignity, while men are beer-swilling boobs who treat rational thought like the plague. The material’s semi-provocative and simplistically arranged to trigger audience interaction, but that doesn’t mean the conflicts have to be played so crudely. Story doesn’t drive the film. He’s more of a traffic cop, and that passivity grows intolerable once the third act introduces abundant break-up-to-make-up scenarios to bring on a big finish. 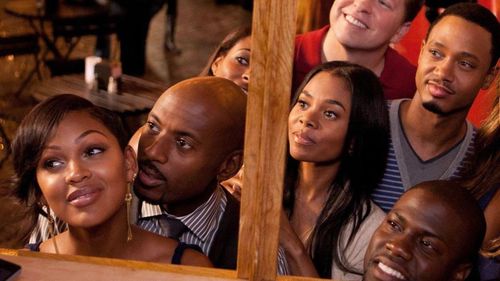 “Think Like a Man” is a tired film, especially when it rolls on for over two hours, achieving little insight into the mechanics of needs and desires. In fact, the characters don’t even appear to like each other, with their expected freefall into devotion missing authenticity. Love never seems to enter the equation either, as Harvey and the movie treat affection like a puzzle that demands to be solved before it’s even out of the box. Where’s the fun in that? There’s no mention of respect, adoration, and chemistry. There’s no appreciation of attraction. “Think Like a Man” just reheats mildly offensive gender stereotypes to boost book sales, served with racially charged jokes, mediocre acting, and a general depressive quality that might prompt sensitive viewers to keep away from romance entirely.