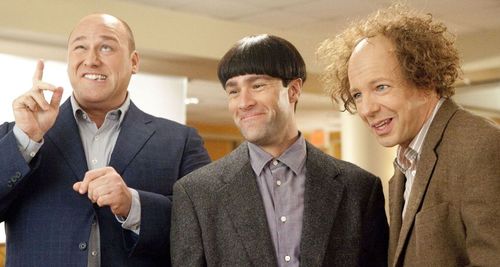 As The Three Stooges, Moe Howard, Curly Howard, and Larry Fine created a comedy institution. A vaudeville act that grew into a popular series of shorts and features, the Stooges developed into a household name, with young fans spending long hours replicating the trio’s signature moves of pain, to the consternation of parents everywhere. They are legends with a brand name that’s endured throughout the years, maintaining pop culture position despite an origin that dates back to the 1930s. Attempting to highlight their love for all things Stooge, filmmakers Peter and Bobby Farrelly have brought forth “The Three Stooges,” a bizarre attempt to return classic comedy flavors to the big screen, using an all-new cast to ape classic slap-happy moves. Although the mimicry is sincerely impressive, the picture is anything but, stumbling through a series of unfunny scenes in an effort that’s more for the kids, finding the Farrellys hoping to trigger a new wave of fandom with this love letter to ocular trauma, angry nicknames, and hair pulling. Read the rest at Blu-ray.com