The latest from Aardman Animations, “The Pirates! Band of Misfits” (released elsewhere as “The Pirates! In an Adventure with Scientists”) carries all the hallmarks of the British studio’s wit, speed, and visual creativity. A stop-motion animated effort, the movie is a delightfully entertaining yarn that puts a little cheekiness back into cinematic pirating, especially after the gradual disruption of jollity found in the last three “Pirates of the Caribbean” sequels. Besides, what’s more fun to watch, a mincing Johnny Depp or a plasticine figure of extraordinary flexibility and cartoon possibility, plundering and bumbling across a vividly designed and colored background, surrounded by pure mischief? It also doesn’t hurt that “Band of Misfits” is easily the most charismatic performance Hugh Grant has delivered in over a decade.

Sailing across the ocean on their dilapidated ship, a group of pirates, overseen by Pirate Captain (voiced by Hugh Grant), is in dire need of booty to protect their reputation. With the “Pirate of the Year” awards on the horizon, Pirate Captain is fearful of losing his place as a leading scourge of the sea, facing stiff competition from Black Bellamy (Jeremy Piven) and Cutlass Liz (Salma Hayek). Unfortunately, there’s not much gold out there to be stolen. Luckily, the pirates have boarded a ship carrying Charles Darwin (David Tennant) and his studies, with the scientist taking a particular interest in Pirate Captain’s beloved parrot, which is actually the last living dodo. Agreeing to return to England to present the bird during a “Scientist of the Year” celebration, Pirate Captain finds himself marked for death when Queen Victoria (Imelda Staunton) arrives with her hatred of pirates, forcing the gang to find a way out of England and back to the comfort of the seas. 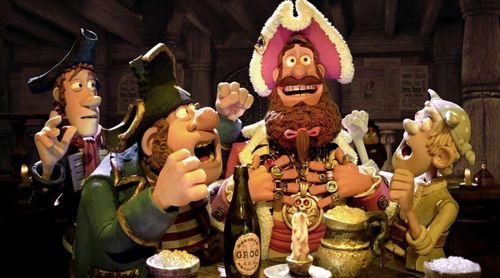 Perhaps facing the legacy of the dreary “Pirates of the Caribbean” franchise, “Band of Misfits” assumes a more lightweight approach. Instead of supernatural antics and brooding family turmoil, these pirates are generally a peaceable bunch who love a good ham dinner almost as much as their captain does. Directors Peter Lord and Jeff Newitt bring scalawag events to the broad realm of animation, where traditional Aardman filmmaking techniques have been married splendidly to unobtrusive CGI, able to bring out the rolling waters and expansive backgrounds smoothly, establishing a new dawn for the handmade approach that I hope will carry on into future productions. “Band of Misfits” is a dream to visually explore, with blissful textures and sly wit pushed back and forth around the frame, backing up a solid script with a tart feel for this fantasyland of pirates, science, and a sword-toting Queen Victoria. It’s a gorgeous picture.

Thankfully, “Band of Misfits” carries a pronounced funny bone, skillfully articulated by the ensemble, who digs into their roles as pirates and historical figures with aplomb. Taking the lead role, Grant makes for a marvelous buccaneer, employing his natural wit and ability to work incredulity into every breath to fine effect, generating a character with a clean emotional arc, endearing dimness, and superb comic timing, bouncing off the likes of Freeman and Staunton quite well. Tennant also carries himself with ease as Darwin, finding a plausible balance between greed and remorse, always keeping the scientist untrustworthy, adding an interesting villainous component to the story. And for those who appreciate an unstoppable baritone, Brian Blessed cameos as the Pirate King, the emcee of the “Pirate of the Year” competition -- a man so strong, he can inflate and explode a hot water bottle in just a few concentrated breaths. 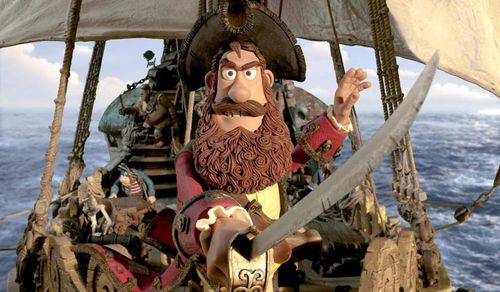 “Band of Misfits” repeatedly heads into unexpected directions, having fun twisting historical figures into new poses and embracing the crew’s special skill of disguise, allowing them to infiltrate the realm of scientists. The script does hit a troublesome block of formula when the Pirate Leader reaches his most helpless point, but it’s a small hiccup in a swiftly paced movie. The third act alone is filled with fights and ship battles, taking to the sea and air to pay off all the silliness with a sizable bang. Maybe a few more jokes would’ve done the trick, but it’s hard to complain when the animated artistry is this brilliant. Maybe we’ll all see another film attempt to mount a baking soda explosion inside a massive steel ship in our lifetime, but I doubt it will look this good.

Richly scripted and intensely creative, “The Pirates! Band of Misfits” is a rollicking good time for all ages. It’s a special treat for anyone who’s lost their pirate verve in recent years, returning to a realm of endless seas, bearded men of dubious character, and delicious ham dinners.