“The Moth Diaries” initially caught my attention due to the participation of writer/director Mary Harron, the filmmaker behind such pictures as “American Psycho” and “I Shot Andy Warhol.” Last seen on the big screen with 2005’s “The Notorious Bettie Page,” Harron spent a considerable amount of time in television, with “The Moth Diaries” a long-awaited return to feature-length moviemaking. Sadly, Harron’s instincts have flattened some since her last major cinematic effort, as this latest offering lacks a confident vision and true storytelling clarity. While effectively eerie, “The Moth Diaries” doesn’t provide a sustained vibration of dread, mixing adolescent hysteria with monstrous developments to little effect.

Eagerly returning to a prestigious boarding school to be with her friends for another year after the suicide of her beloved father, teenager Rebecca (Sarah Bolger) is thrilled to be reunited with her dearest confidant, Lucie (Sarah Gadon). New to the school is Ernessa (Lily Cole), a withdrawn young woman slow to join the group. Trying to be kind, Rebecca extends her companionship to the newcomer, only to find Ernessa drawn to Lucie. Pushed out of her intense relationship with Lucie, Rebecca is hurt and confused, especially when Ernessa displays odd signs of vampiric behavior, leaving the frightened girl to fear for the safety of her once inseparable friend. With the faculty, including English teacher Mr. Davies (Scott Speedman), downplaying her suspicions, Rebecca is left alone to investigate Ernessa’s puzzling past while facing the systematic destruction of her closest classmates.

An adaptation of the novel by Rachel Klein, “The Moth Diaries” is a confusing picture that never entirely nails down a psychological tone that’s worth the time invested. Preying on adolescent fears of abandonment and developing sexual allure, the story labors to balance Rebecca’s rising desperation to preserve her trusty social circle in her greatest time of need with the mystery of Ernessa, who exhibits strange behaviors often rooted in moth imagery. It’s an enticingly bizarre story with ties to young adult fiction and universal growing pains, handed a promising creature-feature shift in perspective, discussing and embracing gothic horror overtones, deconstructing the genre as it partakes in its traditions.

Strangely, “The Moth Diaries” only runs 78 minutes, bleeding a complicated story dry of atmosphere as it races from one plot point to the next. At times, the movie almost seems like a trailer for a longer cut Harron was working on at one point, sprinting through suspense surrounding Ernessa’s true form and the saga of Lucie, who’s gradually reduced to a tragic victim of manipulation, with Rebecca attempting separate her dear friend from an alleged bloodsucking ghoul. Hints at a larger psychological grip choking the life out of Rebecca are introduced but left unfinished, with any intriguing traumatic flare-ups that suggest an active imagination on the part of our hero abandoned as soon as they’re introduced -- hallucinatory asides are forcefully pulled back and rerouted to the literal, robbing the material of surprise and nuance. There’s also a dead end with the lecherous Mr. Davies, who pretends to care about Rebecca’s woes to inch closer to his pupil. A few uncomfortable violations of trust aside, the subplot doesn’t add much to the overall tension. 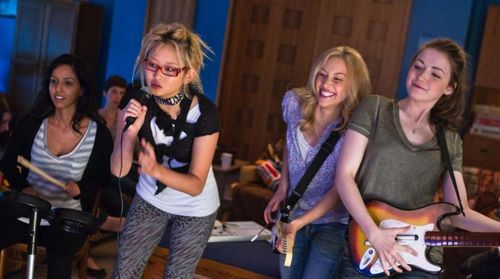 A fiery lead performance from Bolger helps “The Moth Diaries” find the panic its hunting for. Providing alarm without melodramatic hysteria, Bolger delivers fine work, doing her best to keep the movie’s suspense afloat with her wide-eyed reactions to subtle changes in her circle of friends. Cole is already blessed with a unique alien look about her that adds to the overall strangeness of Ernessa, with her performance calm enough to carry the character’s understated menace. However, commendable acting can’t save the feature from its unfortunate brevity and unadventurous nature. It’s a missed opportunity for Harron, who can’t figure out a game plan for the source material’s mysteries, leaving the picture to spin helplessly, wasting enticing genre ingredients.