Film Review - The Lucky One

Even for a syrupy Nicholas Sparks adaptation, “The Lucky One” is awfully hard to swallow. However, it starts off promisingly enough, displaying dewy stars frolicking in dewy locations, trading bedroom eyes as the melodrama grows like weeds around them. We’ve been here before, in movies such as “The Notebook” and “Dear John,” yet “The Lucky One” stands out from the pack as material that could’ve found a distinctive position of romance and redemption, yet all ambition is thrown away on cartoonish villainy and a complete lack of rational thought from the main characters. There’s genuine heat between stars Zac Efron and Taylor Schilling, but the rest of the picture is utter nonsense, cruelly unaware of its own absurdity.

After discovering a photo of a young woman while on duty as a marine in the Middle East, Logan (Zac Efron) comes to believe the picture is a good luck charm, carrying it close as he narrowly escapes death on numerous occasions. Returning to America, Logan decides to figure out just who the woman in the snapshot is, eventually locating Beth (Taylor Schilling, “Atlas Shrugged: Part I”), a divorced mother of young Ben (Riley Thomas Stewart), living with her grandmother Ellie (Blythe Danner). Unable to express his intentions, Logan accidentally finds himself with a job at Beth’s kennel, growing close to the family with his chivalrous ways, sparking up a romance with his boss, much to the disgust of her ex-husband, corrupt cop Keith (Jay R. Ferguson). With the purpose of his trip threatened to be revealed in a harsh light, Logan searches for a way to share his feelings about destiny with his new love, who’s still raw from the loss of her brother in Afghanistan. 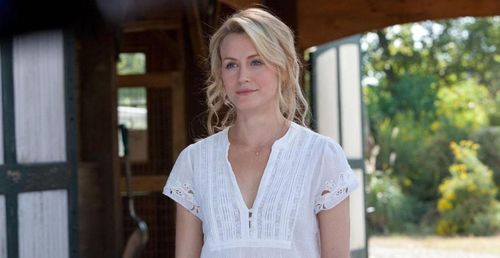 “The Lucky One” is a romance, thus able to escape a great deal of criticism when it comes to gooey acts of devotion and overheated declarations of feelings. It’s Sparks after all, with his latest adaptation (credited to screenwriter Will Fetters) carrying the same earnestness as previous efforts, only here the location has been shifted away from familiar North Carolina stomping grounds to the moistness of Louisiana. Fans of the author will easily be able to wrap themselves up in another story of unsettled lovers, with Logan and Beth dealing with tremendous internalized strife, finding their shared shock helps them to bond as friends, which quickly turns to love. There are few surprises to be found.

The romance is perhaps the only plausible element of the picture, with Efron and Schilling sharing tremendous chemistry as the possibly fated twosome. Their heat leads to credible lust and longing massaged well by director Scott Hicks, who brings his interests in gorgeous cinematography to help set the mood, offering a golden summer playground for the characters to frolic within, making “The Lucky One” always interesting to watch. One could get lost in the visuals on display here, and perhaps that’s for the best. Between the electricity generated by the leads and the widescreen highlights of Louisiana splendor, there’s no reason to ever pay attention to the unsightly displays of stupidity that attempt to pass itself off as a story. 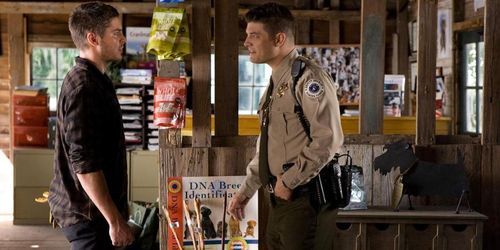 Much of “The Lucky One” doesn’t make sense, or at least carries a distinct aura of illogic, making characterizations difficult to follow. One of the major disruptions stomping around the film is Keith, a one-dimensional brute who’s prone to alcohol abuse, domestic violence, and raging jealousy. The script even has the cop pull a gun on Logan’s adorable German Shepherd just to solidify his wickedness. It’s all so ridiculous, excruciatingly overplayed by Ferguson. Instead of complicating Logan’s invasion by making Keith a thoughtful but fallible man, thus allowing Beth honest pause when it comes to future plans, the script turns the spoiler into a flat-topped ghoul, abusing his law enforcement position to intimidate his ex into shared custody of Ben, preventing her escape from the state. While I’m no legal expert, something tells me the scores of people who witnessed the cop point a loaded gun at a dog might be able to help Beth with her quest to acquire full parental control. Keith’s ultimate fate is also a howler, pulled from a daytime soap opera writing room trash can. Sparks is shameless.

Also raising concern is the sensitivity of Logan’s journey to meet Beth. The movie treats the reveal as an absolute disaster for everyone involved, but it’s difficult to comprehend why anyone would take such offense to a faultless young man’s innocent quest of gratitude. If there’s something here approximating betrayal, Hicks has blown the execution. Beth doesn’t show a lot of common sense throughout the feature (you know, like marrying a guy who’s prone to pulling a gun on a dog), but her snappish processing of the photo’s return is baffling, killing off what was left of the picture’s extremely limited appeal. In fact, Beth comes across a bit deranged in a handful of scenes. While Schilling’s gale-force charisma is exciting, the character is confusing, lost somewhere between authentic grief and trite Sparksian vulnerability.

“The Lucky One” dies a screaming death in the second half, giving itself over to such rampant foolishness, bending over backwards to keep in step with Sparks’s work, despite the puzzle pieces fitting awkwardly. I suppose that’s what all the lovemaking and partial nudity is for in these films, to distract from the obvious flaws in the writing.