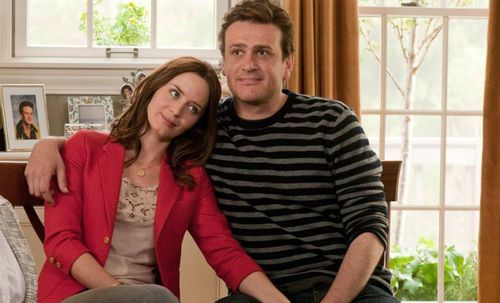 “The Five-Year Engagement” highlights familiar cinematic working parts, keeping in step with previous Judd Apatow productions with its overreliance on improvisational comedy, unnecessary foul language, and a bloated run time (clocking in at just over two hours). Yet, the picture manages to locate a morsel of life left in the mummified romantic comedy genre, using relationship realism and blindingly charismatic stars to carry a heavy load of Apatowian formula. While a bit unwieldy, “The Five-Year Engagement” is a winningly silly effort to dissect pre-wedding tension and longtime commitment coziness, doing a capable job milking domestic discomfort for every drop of goofballery, punctuated with a sweet dollop of genuine affection shared between the lead characters. In an industry obsessed with wedding movies, here’s an anti-ceremony heartwarmer, executed with a spongy comedic imagination and a little touch of soul.

A chef on the rise, Tom (Jason Segel) is ready to propose to his girlfriend of one year, aspiring professor Violet (Emily Blunt). With their engagement accepted by friends (including Chris Pratt) and family (Alison Brie and Jacki Weaver), the couple begins the arduous process of scheduling the ceremony. However, plans change when Violet is accepted at the University of Michigan, necessitating a move from San Francisco, with Tom leaving his prestigious job to make sandwiches in the Midwest. With Violet thriving at the school, Tom is left in a depressive fog, losing interest in personal hygiene and career ambition, placing a strain on the relationship. When a two-year commitment to the school turns into five, the pair is forced to confront their aborted plans of marriage, realizing they might be better off without each other. 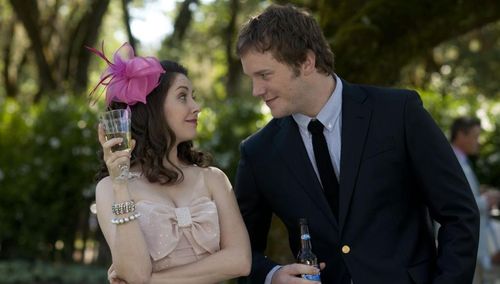 “The Five-Year Engagement” marks a reunion for director Nicholas Stoller and star Jason Segel, who joined forces in 2007’s uproarious “Forgetting Sarah Marshall,” returning here with a script that looks at the foibles of a relationship, as opposed to the nuclear destruction of one. While not as comedically acidic as their previous collaboration, “The Five-Year Engagement” carries an invitingly warmer tone, enjoying the tenderness and cohabitational timing shared between Tom and Violet, making a concentrated effort to broadcast the couple’s interactions as mildly exaggerated authenticity. The banter between the twosome is playful and occasionally barbed, with an underlying respect keeping the pair secure, reflecting a union that’s been candied through a meet-cute story (they met as a costume party, he in a bunny suit and she dressed as Princess Diana) they enjoy paging through, and now faces the ultimate commitment.

Stoller and Segel don’t waste their time on wedding movie clichés, instead guiding their script through the futility of plans, finding Tom and Violet embarking on their Michigan mission with all the hope in the world, only to be divided by vocational woes and the consistent delay of their nuptials. The film hits its stride once the couple lands in the Midwest, introducing a host of interesting and amusing supporting characters, including Winton (Rhys Ifans), Violet’s dynamic professor, while Chris Parnell and Brian Posehn both contribute slyly silly work as average Michigan men slowly losing their minds, creating a bad influence on Tom, taking him down a dark path of deer hunting and unruly facial hair. “Five-Year Engagement” keeps light enough to approach, but there’s material here concerning job opportunities and bedroom discussions that many might relate to, performed gracefully by Segel and Blunt, who maintain exciting chemistry and ace timing, keeping the audience invested in the well-being of their happiness together. 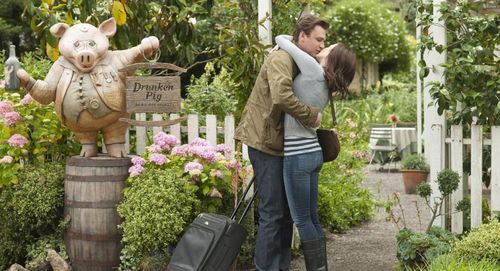 The script drills into Tom’s discomfort with Michigan and the self-imposed death of his master chef dream, also working through Violet’s challenges at work as she steps into Winton’s crosshairs of seduction, adding further stress to an already fractured relationship. The film keeps its chin up, stuffing scenes with plenty of mischief, but there are painful mistakes to explore. A key pitfall for the couple comes with the obligatory break-up-to-make-up scenario, commonly used to artificially produce a feel-good explosion as screen lovers once thought to be separated forever are joined again at the last minute. “The Five-Year Engagement” orders up the dead weight disco with 40 minutes left in the movie, building an authentic separation period for Tom and Violet, smartly subverting the routine. It’s a rare film where one actively wants to see these estranged partners reunited, having experienced their single-life hell for an extended amount of screentime.

Also praiseworthy is cinematography by Javier Aguirresarobe (“The Road,” “Vicky Christina Barcelona”), who captures a hypnotic glow to the proceedings, with gorgeous lighting drenching the film in unexpected beauty. Not that a comedy should look like it was shot with a cell phone, but the visuals are extraordinary here, bringing special life to the tomfoolery, also establishing a distinctive look to the oft-photographed tilted playground of San Francisco.

As previously mentioned, not everyone in the cast is skilled with improvisations, with a few clunkers halting the flow of the feature. Nevertheless, the comedic batting average remains exceptional, sustaining a flow of laughs and a little concern to bring the saga of Tom and Violet to life with an outstanding amount of heart and humor, reflecting the true nature of the marital experience.