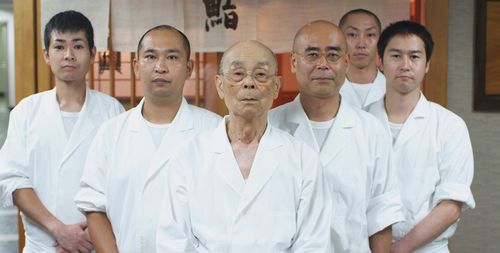 Here’s a documentary that expands a 10-minute-long subject into a hypnotic 80 minutes of food preparation and philosophy. “Jiro Dreams of Sushi” approaches the fine art of meal construction with a goal to revel in the gifts of a sushi master, only to discover something far more appealing about a highly respectful family dynamic behind the counter. Foodies will likely lose their mind watching a genius assemble bite after bite of world-famous sushi, but the picture’s command emerges from a heartfelt place of craft and expertise, working beyond gastronomy particulars to understand a deep sense of tradition and quality that’s carried on for decades, found in a most unlikely place.

Jiro Ono is an 85-year-old man who’s devoted his life to the world of sushi preparation. The owner of Sukiyabashi Jiro, a tiny shop in Japan (seating only a handful of people at a time), the elderly fellow has turned his passion into culinary legend, with customers traveling from all parts of the globe to taste his work, often with Jiro standing stoically in front of the consumer, studying their reactions and needs. A Michelin Guide 3-star hot spot, Sukiyabashi Jiro is an expensive place to eat, but provides a one-of-a-kind sushi experience, with exquisite flavors found only at this establishment, mystifying critics and fans. In this restaurant, authority is earned through years of training and study, with Jiro’s oldest son Yoshikazu carrying on the tradition, running the place while his father oversees the creation of some of the most succulent sushi offerings around.

Director David Gelb seeks to explore Jiro’s headspace in this documentary, spending time in Japan with the sushi master as he goes about his daily business working at the restaurant, delivering high quality meals to eager customers. A poker-faced man who’s perfected sushi technique, Jiro is revealed to be a serious workaholic, largely ignoring parental duties to build his skills in the early days, hunting for ways to elevate fish flavors and rice consistency, focused intently on his craft. Reserved and humble, but undeniably stern when it comes to work inside the restaurant, Jiro has achieved extraordinary success with his business, faced with incredible demand for his food (dinner prices start around $400, with hopeful diners placing reservations a year in advance).

While popular, Jiro has retained artfulness about his work, with careful movements and concentration contributing to the accelerated taste of the sushi, while a backroom of apprentices works diligently to learn the craft, taught the basics with hopes to one day work alongside the master and become celebrated chefs themselves. “Jiro Dreams of Sushi” observes kitchen activity, where young men massage octopus for 45 minutes, or tenderly cut Technicolor red salmon into perfect squares. The work is tedious, but necessary to bring the sushi to life, overseen by Yoshikazu, who wears a heavy burden of expectation now with his beloved father reaching an elderly age. The prospect of carrying on without Jiro is daunting, but the intensive training has paid off, with the son’s sushi skills rivaling the master’s, to the great pride of the father. There’s also Takashi, a younger son in the business as well, setting up a mirror shop in another town. Without Jiro there to haunt the building with his brilliance, Takashi runs a more relaxed restaurant, though his skills are equally impressive, only lacking the established face of premiere sushi making to truly impress curious customers. 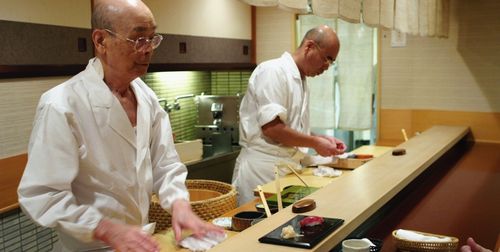 Gelb wows with his study of the finished product, and sushi lovers will undoubtedly adore all the extreme close-ups of Jiro’s work. As someone with a profound fear of sushi, I even found myself leaning toward the screen, inching closer for a bite. While the finished food is king, the director is interested in the process of purchasing tuna, following buyers as they search for only the finest fish to bring to the restaurant. There’s also a minor ecological warning offered, with Gelb highlighting concern about overfishing due to the rise in sushi’s popularity. Perhaps most interesting are glimpses of life outside of the restaurant, with Jiro sharing memories from his unhappy childhood, while taking a day trip to see old friends, many of whom are just happy to be alive. Without breaking a sweat, Gelb unearths a great deal of personality from a man who’s spent his life silently studying and judging others.

“Jiro Dreams of Sushi” is a beautifully crafted documentary, aided by a propulsive score that turns food preparation into a ballet of movement and presentation. Yes, it will make you hungry, but it also supplies an understanding of skill and care that’s largely lost in today’s mechanical world. It’s a simple story, yet one with fascinating levels of behavior and expertise to examine.