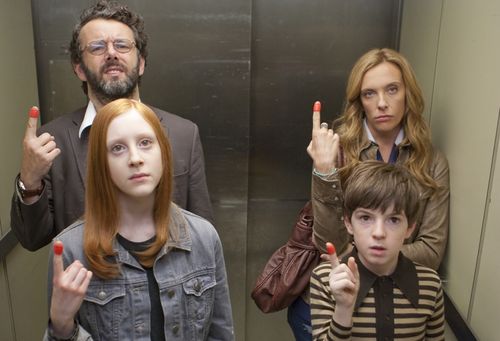 Despite a provocative title, “Jesus Henry Christ” doesn’t really have anything interesting to share with its audience. It’s an empty calorie viewing experience, helped along by a few commendable performances, but the event is largely drowned in meticulous frame details, mimicking Wes Anderson’s directorial fingerprint. Helmer Dennis Lee (“Fireflies in the Garden”) comes to “Jesus Henry Christ” with a clear idea on how the feature should look, but the human element is sorely lacking from his whirring filmmaking tastes. It’s boldly colored and sharply designed, but there’s little to take away from the movie besides a surface appreciation for certain production accomplishments. The rest of the effort doesn’t share the same vibrant position.

Patricia (Toni Collette) is an emotionally volatile woman who’s suffered a great number of family tragedies in her life, eventually left on her own to take care of her father, Stan (Frank Moore). Looking to artificial insemination to conceive a child, Patricia soon gives birth to Henry (Jason Spevack), a baby genius who ultimately grows into an inquisitive child. On the hunt for his biological father, the quest introduces Henry to Dr. Slavkin (Michael Sheen), a behavioral specialist currently making life hell for his own child, Audrey (Samantha Weinstein). Recognizing Slavkin’s story of cancer scares and cheating spouses matches up perfectly with the history of his own birth, Henry accepts the doctor as his biological father, creating enormous panic and curiosity for everyone involved.

Inflating his short film for a feature-length treatment (produced by Julia Roberts), Lee infuses “Jesus Henry Christ” with speed, not substance. It’s a brisk picture, filling 86 minutes with a deadpan sprint that’s derivative of other filmmakers, yet the reproduction gives Lee a colorful guidebook to follow as he mounts an idiosyncratic exploration of the true nature of family. The movie moves, which is a positive attribute, speeding forward through Henry’s world of brilliance and inquisition, following the boy as he challenges the world around him, using his photographic mind to untangle the human experience, despite a hazy backstory of his own. Instead of an overly dramatic atmosphere of raw feelings, Lee elects for a cutesy, stylized approach, stiffening the material with a comedic slant, reaching for quirk whenever possible.

If there were something more meaningful to “Jesus Henry Christ,” the visual scheme and crisp timing would find a comfortable home here. Instead, the material doesn’t carry the soulful pinch Lee imagines, lacking depth as Henry whooshes through his own life, kicked out of numerous schools due to his intelligence, while encouraged to apply to college to help the outside world study his beautiful mind. Mercifully, Lee doesn’t paint the boy with primary colors, making Henry a one-liner machine out to stymie adults everywhere. The character has a heart and an understandable need to trace his roots, finding an ally in Audrey, a frustrated pre-teen transformed into an acid sprinkler after her sexual preference was prematurely pinpointed on the cover of her father’s book on homosexuality. Life with the younger characters is interesting, especially when off on their own adventures of distraction. The adults retain less bite, though Collette and Sheen are amusing to behold as the flustered authority figures. The cast poses and pauses skillfully, adding some weight to an otherwise ephemeral drama. 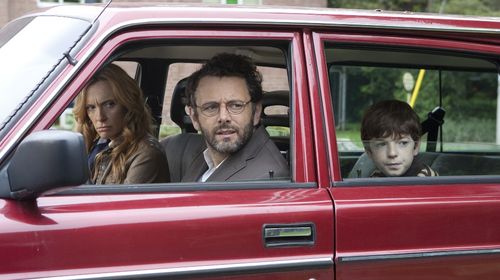 “Jesus Henry Christ” spends too much time planning cuts and perfecting framing, leaving the story to gradually wilt away, rendering the climax with an inadequate emotional release. While the material is slight to begin with, the film doesn’t make a concentrated effort to reach a dramatic peak, failing to preserve any of the conflicts. A few subplots, particularly anything with Patricia and her cursed family, are left in pieces. It’s hard to argue with the pace of “Jesus Henry Christ,” but it’s a shallow visual exercise, wasting a vast amount of promise on tuneless directorial flourishes.