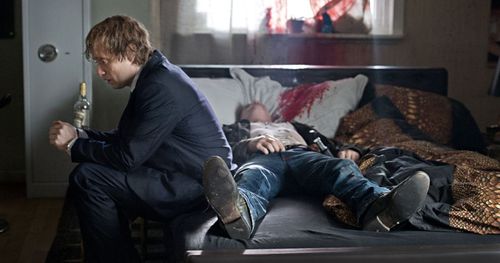 From Norway comes “Headhunters,” a startlingly aggressive offering of thriller cinema that arranges quite a ferocious ride of murder and escape. While it introduces itself as a darkly comic heist picture with satiric flavors popping from its business world setting, the feature soon takes off like a shot, hitting the viewer with all sorts of gruesome acts of violence and desperate scenarios of survival, maintaining an outstanding pace as it mounts numerous twists and turns. Although it carries a few off-putting moments for the average moviegoer, “Headhunters” is a truly accomplished showcase of direction, with copious amount of surprises and neat corners on the storytelling. That Hollywood is rabid to remake the film is the least shocking thing about it.

Roger (Aksel Hennie) is a successful corporate recruiter married to Diana (Synnove Macody Lund), a stunning woman aching to have kids. Suffering from a Napoleon complex, Roger is eager to lavish his wife with gifts he cannot afford, supplementing his income through art theft, using his relationship with security chief Ove (Eivind Sander) to protect his criminal efforts. Meeting suave ex-soldier Clas (Nikolaj Coster-Waldau), Roger learns the man is in possession of a rare painting worth untold millions. Embarking on his routine of burglary, Roger instead stumbles upon revelations about his life that throw his concentration off balance, soon comprehending that Clas, a man the headhunter was interesting in placing for a high profile management position, is out to kill him. 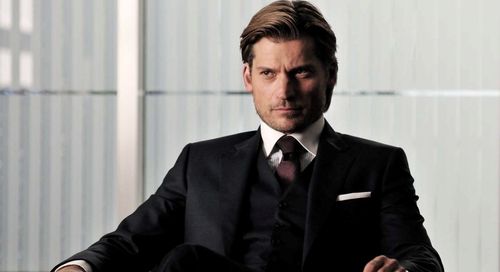 Adapted from the book by Jo Nesbo, “Headhunters” does a fine job masking its intentions. Establishing itself as a story of Roger’s insecurities and financial strain, the film speeds along a suitable pace, absorbing the character’s skill of negotiation with clients, Diana, and Lotte (Julie Olgaard), his needy lover. Roger is no hero but he’s a charmer, confident and manipulative, yet his lack of height stymies the reach of his ego, assuring himself that to maintain this flashy lifestyle he must fuel it with overspending. “Headhunters” initially winds down a customary route of misconduct, monitoring Roger’s expertise in art theft and his interaction with Ove, a dim-witted, fully armed brute addicted to the giving nature of Russian prostitutes. Direction by Morten Tyldum is snappy, hitting all the basics of bad behavior with a fresh pace and smooth editorial flow, commencing the story with a formulaic but enticing arrangement of domestic pressures and forgery skills.

And then it all goes straight to Hell.

With the introduction of Clas, a man handsomer and taller than Roger, “Headhunters” takes a sharp left turn into thrills, igniting a battle of survival instincts between the art bandit and his seemingly passive pursuer. It seems Clas’s background covers a wide array of high-tech tracking procedures, inflaming Roger’s paranoia as he struggles to comprehend the soldier’s ability to find him anywhere, requiring escape plans that range from a simple outwitting of local law enforcement officials to drastic acts of concealment, including an unforgettable dip into the juicy bowels of an outhouse. “Headhunters” quickly turns into a chase picture, detailing Roger’s whirring mind as he endeavors to evade Clas’s attacks and piece together a map of betrayal, concerned Diana is playing a major role in the whole scheme. Tyldum does a sensational job building the tension, encouraging a manic tone to Hennie’s performance that helps aggravate the situation, holding tight on the marked man as he attempts to keep his panic at bay while enduring a series of terrible accidents and assassination attempts. 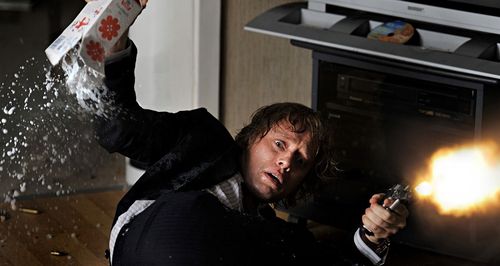 “Headhunters” does get fairly violent to make an impression, finding Roger’s path to survival littered with mangled bodies. The escalation of the film is so pure and cinematic, I doubt few will truly be bothered with these graphic pauses in the hunt. Still, “Headhunters” doesn’t mess around, which is a large part of its appeal. The reward is a tightly plotted thriller that generates pleasing circular movement, paying off the majority of its introductions with confidence, giving outsiders a turbulent ride of evasion and revenge with an unexpectedly comfortable landing.