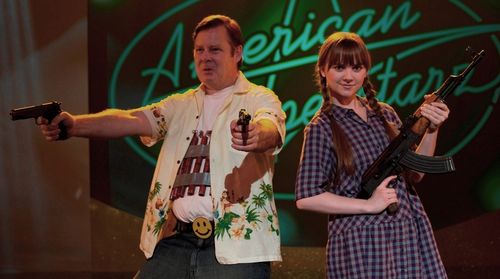 With “God Bless America,” writer/director Bobcat Goldthwait has manufactured an exhilarating sensation of disgust, funneling a reservoir of frustration into an acidic script that somehow manages to be hilarious while remaining enormously unnerving. It’s a sniper-sure shot of rage striking the heart of American culture, having a blast wiping away the scum of the Earth. It’s a chaotic tear through reality shows, social irritants, and amateur singing contests that’s finessed superbly by the helmer, who commits in full to a lunatic idea. Even for a filmmaker who’s made pictures about bestiality, autoerotic asphyxiation, and alcoholic clowns, “God Bless America” still manages to astonish with its audacious content and ballsy execution. It’s a couch potato battle cry capturing the zeitgeist in a bold, bloody fashion. Read the rest at Blu-ray.com