For Disneynature’s sixth worldwide release, the company turns their attention to chimpanzees and all the curiosity and cuteness they provide. “Chimpanzee” has plenty of personality to share as it constructs a tale of a baby fighting to find his place after the death of his mother, but this feature is more reality show than distanced animal documentary. Building a narrative out of random footage, the production aims to control nature to meet the needs of tired formula. The technical achievements of “Chimpanzee” are nothing short of stunning, but missing here is an authenticity of behavior and stillness of observance, wiped away to give audiences a cartoon rendering of the wild -- the producers fearful they might not sit still for the real thing.

Directed by Alastair Fothergill (“African Cats”) and Mark Linfield (“Earth”), “Chimpanzee” tells the story of Oscar, a rambunctious baby chimpanzee living deep in the forests of Africa, raised by mother Isha and the larger community of apes, led by alpha male Freddy. Spending his days learning the chimpanzee ropes, Oscar struggles to find his place in the wild, getting used to tools that crack open nuts or learning to climb trees. Randomly attacking the group is Scar, a villainous chimpanzee who manages to kill Isha during one rampage, leaving little Oscar without a parent to help protect him. Facing certain doom if left on his own, Freddy gallantly steps up and accepts Oscar as his own, helping the baby find his footing as Scar prepares for another attack.

With last year’s “African Cats,” it was clear to see Disneynature slowly scraping off the nature element of the brand name. While dedicated to selling the wild to paying customers in the mood for behavioral authenticity to go with boatloads of cute, the studio introduced a stronger narrative element to the effort, creating stories and characters to ease sympathies. The circle of life suddenly had a script, which wasn’t a new idea for the studio, but appeared disingenuous to the Disneynature mission to bring snapshots of life in motion to the multiplexes of the world.

“Chimpanzee” steps further toward an unsettling sense of manipulation, erasing any feel for documentary standards to monkey around with the apes. Our guide here is Tim Allen, providing narration that slips into acting on occasion (tossing in a grunting callback to his “Home Improvement” years when the chimps bust out their power tools), supplying more of a running commentary than an eloquent verbal summation of Oscar’s static activities. It’s strange work from Allen, who’s been hired to charge up the proceedings, helping the directors invent dramatics and mischief for the stars of the show. While “Chimpanzee” provides a few patient moments of forest activity, the majority of the movie is uncomfortably shaped to follow a story of the little creature’s development in the wild, with heroes and villains, comedy and tears. It’s practically an animated picture at times, especially anything involving Scar, the antagonist of the film who’s characterized as a chimp basically living to make life hell for Freddy and his tribe. Even the name Scar conjures memories of broad Disney villainy, losing the complexity of nature to color with crayons. 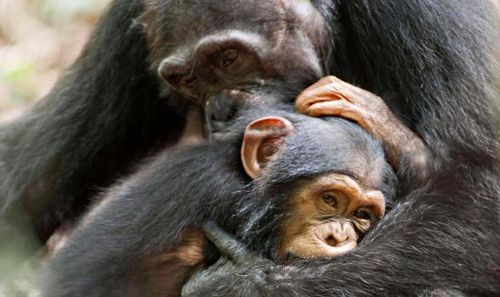 With magnificent time-lapse photography and extreme close-ups of the apes, “Chimpanzee” is hypnotic in small doses, best when the intrusive editing and narration take a smoke break, leaving pure personality and forest splendor to survey. It’s truly amazing to see the chimpanzees carry out their adventures, with the collection of food and grooming needs taking up most of their to-do list. I wish the filmmakers were more comfortable allowing the creatures to generate their own narrative, finding excitement in daily challenges, while attempting to form a more academic approach capable of educating viewers.

Because there’s so much manipulation in play during “Chimpanzee,” it’s hard to understating animal mentality and communication nuances, rendering the whole movie pointless outside of its cuteness factor, which is off the charts when focusing on little Oscar and his growing pains. “Chimpanzee” is by far the least engaging of the Disneynature efforts, a cruel irony considering how hard it tries to provide vigorous drama for all ages. While it goes without saying that all nature documentaries are handled with some degree of editorial magic to come alive, “Chimpanzee” feels overly finessed, demanding to be loved instead of aspiring to inform.