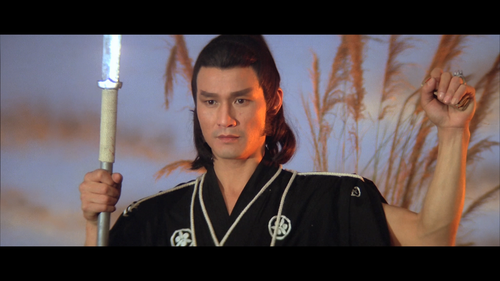 I'll admit that my education on the legacy of the Shaw Brothers Studio is lacking, having only picked up bits and pieces of their legendary filmography from television airings, daredevil revival house screenings, and the ultimate homage to their efforts, Quentin Tarantino's "Kill Bill" saga (John Carpenter's "Big Trouble in Little China" also made an impact). Apparently, I need to introduce more Shaw Brothers into my moviegoing diet, with their 1981 effort, "Five Element Ninjas" (aka "Five Elements Ninjas" and "Chinese Super Ninjas"), a furious face blast of martial art choreography, blood-soaked violence, and marathon displays of poker-faced honor. A lovingly low-budget bruiser committed to the nuances of bodily harm and ancient weaponry, the feature is a total hoot, supplying superbly designed action and broad displays of anger. Considered by some to be one of the best Shaw Brothers creations in their extensive library, "Five Element Ninjas" certainly lives up to its reputation, bringing to the screen a fresh imagination for martial art battle scenarios and ultimate revenge, sold with a fist-first mentality that carries evenly throughout the production. It's raw, ridiculous, and addictive all the way. Read the rest at Blu-ray.com