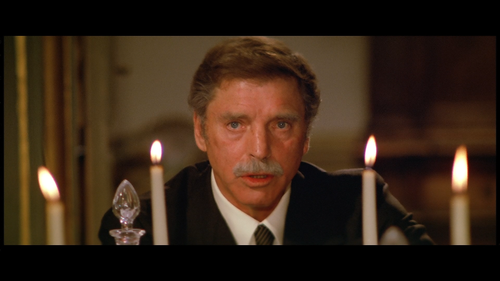 A master craftsman of films such as 1963's "The Leopard" and 1971's "Death in Venice," Luchino Visconti settles down for 1974's "Conversation Piece," which is perhaps his most tranquilized effort. Taking a microcosmic look at life inside an Italian apartment building, the picture is exquisitely observational and finely acted, carrying a bold sense of unspoken desires and developing fears, playing smartly as both a domestic drama with pronounced period intentions and as a study of the aging process, with its distressing atmosphere of seclusion and routine. While a motionless feature in a visual sense, Visconti encourages a rising tension to the piece that's nurtured expertly for two generous hours of pointed conversation and acts of deception. The helmer's penultimate creation, "Conversation Piece" radiates an autobiographical touch underneath the theatrics, articulating private thoughts and broken dreams in an achingly human manner, making star Burt Lancaster's nuanced performance all the more potent. Acidic, with a few flashes of uneasy sexuality, the movie commences as a mannered story concerning an invasion of privacy, only to ultimately reveal itself as an open wound of feelings and political paranoia, shaped into a compelling sit by an influential, widely beloved filmmaker. Read the rest at Blu-ray.com