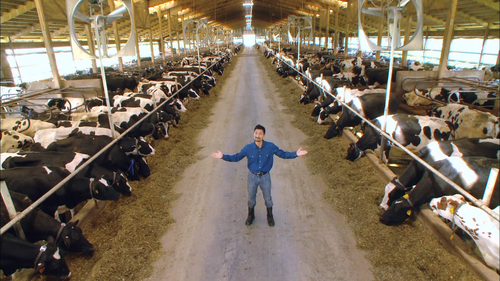 Yul Kwon is a legal expert, management consultant, and, of course, the winner of "Survivor: Cook Islands," making him a most unusual choice to host "America Revealed," a four-part investigation into the systems that drive the American experience. Taking to land, sea, and air on multiple occasions to cross the country for maximum cultural immersion, Kwon grabs the reins of this enlightening but cushy documentary, an effort that carries a distinct ADD atmosphere of information overload. Perhaps fearful of exhausting scope as it dissects national manufacturing and connectivity 53 minutes at a time, "America Revealed" piles on numerous topics without any intent to investigate the true ramifications of agriculture and industrial advancements. While technically sound, the program is messy and disappointingly non-confrontational, sure to irritate those on the prowl for deeper meaning with issues of corporate responsibility and consumer protection. Still, as a surface blast of information, "America Revealed" highlights an enormous amount of issues worth investigating further, backing up ideas with fascinating visuals of life on the go. There's also Kwon, an appealing man making a smooth transition to PBS stardom, able to connect the dots with a few bad jokes, some distinct fear when accepting daredevil tasks, and an earnest sense of discovery. Read the rest at Blu-ray.com