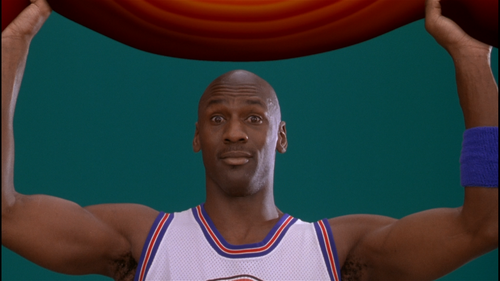 "Space Jam" was an odd film in 1996, and it's an even stranger film in 2012. Someone, somewhere had the bright idea of merging the worlds of cartoons and basketball, throwing a ton of cash toward Michael Jordan to co-star with the Looney Tunes army in what was something of a comeback vehicle for the animated legends at the time. There's barely a story, rarely a laugh larger than an approving titter, and the visuals range from professionally polished to Full Sail freshman. It's a chaotic, ephemeral feature, and it's difficult to tell just what audience this effort is for. Animation purists have vehemently dismissed "Space Jam" as trendy junk over the years, while basketball nuts have treated the movie with a great deal of confusion. It's tempting to outright dismiss the picture as nonsense from a studio desperate to make a longstanding property relevant to the "kids" again, yet "Space Jam" isn't a total failure. It's rather amusing in a who-thought-this-was-a-good-idea? kind of way, making the whole enterprise a big-budget lark that works up a sweat to prove itself worthy for the big screen. I'm certainly not a fan of "Space Jam," but it's hard to deny its rich tapestry of questionable ideas. Read the rest at Blu-ray.com