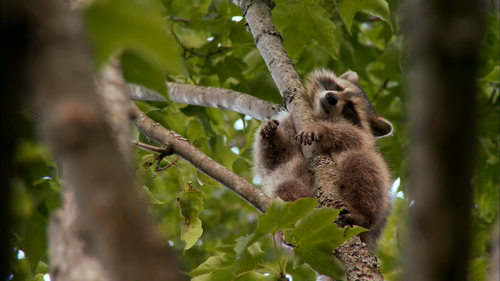 At the Minnesota Zoo, there’s an exhibit devoted to observing the behaviors of local raccoons. While other animals inside the grounds are afforded at least an approximation of their native habitat, the raccoons here have been set free inside a replica of a farmhouse, allowing the critters to forage to their heart’s content. Initially, this glimpse into raccoon life appeared almost offensive in a way, handing the creatures a stomping ground that reinforces their disruptive need to scavenge around vulnerable homes under the cover of darkness. The “Nature” program “Raccoon Nation” essentially reinforces the accuracy of the Minnesota Zoo display, embarking on a study of an animal that’s evolving into a not-so-lean, quite mean urban exploring machine. While the show takes a careful position of science to investigate the furry invasion, it’s clear the onslaught of raccoons into major metropolitan areas is a cause of great concern for the health and wellbeing of humans. They may look somewhat adorable and approachable, but the raccoon is a troubling creature gradually learning to survive anywhere it dares to roam. Read the rest at Blu-ray.com