Blu-ray Review - Fortress of the Bears 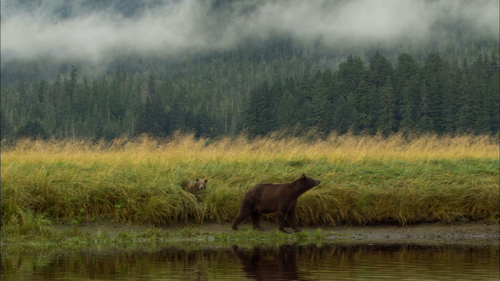 The life of the American bear is a demanding existence of hunting and evading, constantly on the lookout for predators and prey necessary to the animal experience. It's not an easy cycle of survival, often merciless when it comes to displays of aggression, but it's nature in motion, carrying on unmolested for centuries in the great wilds of the world. "Fortress of the Bears" travels to the Tongass National Forest in southeast Alaska, where a community of Grizzly Bears and Brown Bears embark on this yearly process of endurance, awakening from their winter slumber to gorge themselves on the bounty of the river, which pipes in thousands of salmon every spring and summer to the delight of these furry rulers. However, feeding bears is only a small portion of the salmon function, and when that lifeline is disrupted for any reason, it creates a chain reaction throughout the land, robbing trees, insects, birds, and bears of the routine they rely on to make a life for themselves. Although it's cliche to remind readers of the "circle of life," the truth is no joke. Without salmon, the bears are forced to survive beyond their instincts, a development that could cause cataclysmic damage to this lush land of astonishing wildlife personality. Read the rest at Blu-ray.com