Writing anything about the “Star Wars” prequels is a dangerous pursuit. I’m convinced there are people who live only for the opportunity to disparage George Lucas online, leaving any type of discussion or opinion about these now-controversial pictures an open invitation for geek savagery, and I can’t imagine I’m the only one tired of it. Nevertheless, just when everyone thought it was safe to put the “Star Wars” saga back on the shelf, Lucas has ordered up a 3D makeover for his most polarizing work, 1999’s “The Phantom Menace.” That’s right, kids, it’s now possible to have Jar Jar Binks fumble and bumble right at the tip of your nose. Granted, it’s not the ideal way to commence a planned series of 3D reissues, but the film does lend itself to the format. And, to be perfectly honest, despite its obvious faults and unnecessary pandering to children, “The Phantom Menace” is…you know…kinda…sorta…fun.

1999 seems like such a long time ago in a galaxy far, far away. Greeted with ravenous expectations from a global fanbase, “The Phantom Menace” debuted to monster box office and generally positive response, with audiences taking years to come down from their “Star Wars” high to reassess the picture, using DVD and now Blu-ray releases to pull the blockbuster effort apart frame-by-frame, challenging Lucas on every single element of production. I find that mindset terribly misguided, preferring to digest “The Phantom Menace” as superb widescreen escapism, much like the rest of the saga. Not that Lucas is above criticism (we’ll get to that in a moment), but to manically eviscerate the feature is a job best left to those with incredible patience. Rewatching the film, I didn’t find myself in cold sweats, rabidly taking note of every incorrect blink and breath. Instead, I was swept up in a grand serialized space opera as intended, filled with distinct heroes and villains, awful comedic sidekicks, and some marvelous CGI mastery that, while dated in spots, has lost little of its shiny hustle.

“The Phantom Menace” is far from a perfect film, perhaps the least effective of the entire “Star Wars” saga. Yet, there are big screen highlights that carry the experience wonderfully. The mid-movie pod race is a special pleasure, playing up Lucas’s need for speed with slick visual effects and a spellbinding pace, finding young Anakin Skywalker’s Jedi gifts tested on the Tatooine track (the franchise cameos peppered around the sequence remain a delight), squaring off against the despicable Sebulba. The extended “Dual of the Fates” climax is also a propulsive collection of terrific battle footage, scored gorgeously by John Williams as the characters race off in opposite directions to save the day, engaging in heated blaster contests, space dogfights, and furious lightsaber clashes. The villainous Sith Lord Darth Maul continues to be a striking figure of intimidation in the picture, even with such little screentime to feel out the boundaries of his evil. Costuming, set and sound design, and the aforementioned CGI work are all exemplary, generating the sensation of an unfolding epic. It’s a spectacle certainly populated with cartoon asides, but nothing that demands an immediate regurgitation of popcorn. In 2012, “The Phantom Menace” plays confidently, and while it occasionally lacks good taste and inspired dialogue, there’s a cracking pace to keep the fantasy surging along, mirroring the original trilogy.

Obviously, there are a few negative influences prominently featured in the picture, Jar Jar Binks being an obvious but potent reminder of Lucas’s intent to rework “Star Wars” for a younger generation. A tongue-tied Gungan clown sent in to distract while the script dwells on trade federations and the occasional senate hearing, Jar Jar is screen death, no doubt about it. He’s harmless but woefully unfunny, bringing bathroom humor to a series that doesn’t need moronic gross-outs. Also cringe-worthy is the wooden performance from young Jake Lloyd as Anakin, turning the introduction of an iconic character and future killer of younglings into a Nick Jr. personality. Complaints about a “Star Wars” prequel? They’ve all been heard. Still, seeing the film again with a more mature perspective tends to emphasize the rough transitions between thoughtless indulgence and measured, adult plotting.

Of course, 3D is the name of the game with reissue of “The Phantom Menace,” and it’s somewhat of a relief to report how well the picture takes to the difficult post-conversion process. Absent any truly astonishing effects, the feature sustains a subtle look that brings out depth to gorgeous planets such as Naboo, while placing the viewer in the front seat for flying sequences and the pod race showdown. Unlike recent Disney 3D releases that encountered difficulty locating screen elements to massage, “The Phantom Menace” offers plenty of modest spots to expand, with star fields and the opening titles additional examples of beguiling 3D. Just don’t demand anything radical and expectations should be met.

In my estimation, it’s always a treat to have “Star Wars” back on the big screen where it belongs. 3D isn’t a necessary process to enhance the saga experience, but it’s done tastefully on this origin story, giving “The Phantom Menace” added expanse. Naturally, if you already despise everything George Lucas touches, well, these aren’t the droids you’re looking for. It’s more of a 3D party for fans and admirers, playing to the convinced with a conversion. 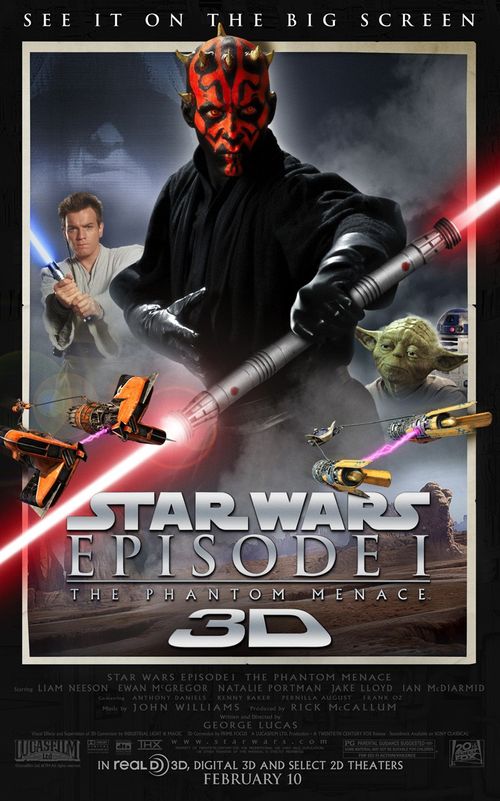