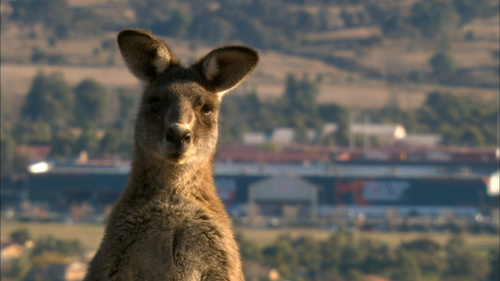 In popular culture, kangaroos are traditionally beloved for their odd shape and undeniable cuteness. Just thinking of kangaroos inspires images of bouncing bundles of fur hosting adorable joeys in their pouches, peacefully hopping along on the hunt for martinis (hey, it's my daydream). In Canberra, the capital of Australia, the kangaroo is a decidedly unstable element of daily life. Facing a surge in population numbers, residents have witnessed an onslaught of kangaroo activity in the area, with the oblivious beasts taking over parks and backyards while prowling for food. The forward behavior of the kangaroo has created a major problem in Canberra, necessitating a culling period to help reduce the population and ease the worrisome increase in roadway collisions. Once thought to be a harmonious symbol of Australia, the kangaroo has become a destructive nuisance to some, leaving local authorities, animal activists, and suburban bystanders unsure of how to attack this problem in a manner that satisfies the public and protects the innocent animals at the center of the disruption. Read the rest at Blu-ray.com