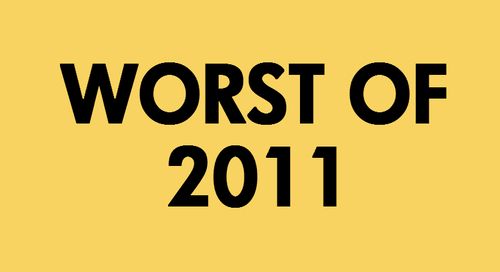 In a quest to replicate the monster success of “Twilight,” industry moneymen handed director (and original “Twilight” helmer) Catherine Hardwicke a sizable budget to dream up a fresh fantasyland populated by hunky wolves and dewy young women. “Red Riding Hood” reimagined the legendary fairy tale as a miserable, studio-bound romance with flashes of flaccid horror, strangling the story with a pronounced rip-off mentality, finding Hardwicke consumed with duplication, hoping to bang out a new franchise with an oxygen-deprived take on furry forbidden love, destroying the inherent macabre playfulness of the celebrated source material. Shoddily produced and assembled, dreadfully acted (whatever thespian promise star Amanda Seyfried possessed in 2010 is now gone for 2012), and cinematically stillborn, “Red Riding Hood” was a cringe-inducing, run-for-the-exit disaster.

Jason Bateman and Ryan Reynolds team up for a body-swap comedy. “The Change-Up” should be light and sufficiently rascally, with two jocular leading men having a ball working out comedic humiliations and extended stages of bewilderment. Instead, the feature is a loosely stitched assembly of wilted improvisations and labored tastelessness, snowballing into a thoroughly obnoxious motion picture devoid of a single laugh. It’s a desperate, ugly movie, wasteful with its abundant resources -- one of many R-rated stinkers released in 2011, making the multiplex toxic for adults or anyone in need of a creative, hearty, well-rounded giggle.

Gus Van Sant’s idea of a tragic romance is to pair two drowsy, mathematically mussed actors in Urban Outfitters gear and set them loose in a Pacific Northwest wonderland of staring contests, imaginary friends (a Japanese kamikaze pilot from WWII, in case you were wondering), and cancer treatments. The vegetative directorial trance is impossible to endure, with the picture drained of any feeling, lost to precious behaviors and botched screen lyricism. “Restless” is right up there with Van Sant’s worst efforts, an increasingly crowded collection of meaningless, artless turkeys overseen by a habitually disengaged filmmaker.

Cameron Diaz isn’t funny. She’s a spunky screen presence, but never a comedienne. “Bad Teacher” is almost entirely dependent on Diaz to bring the laughs, leaning on her broad reactions and rusting sex appeal to make the necessary impression. When that fails (and boy does it ever), the picture turns depressingly crude, serving up rancid improvisations (feeling around for jokes grows irritating in a hurry) and listless supporting performances, even gunning for a sincere climax of redemption for these trivial characters. Wearing its R-rating like a badge of honor, “Bad Teacher” forgot to supply actual jokes, leading with grabby vulgarity and trendy comedy stylings, treating wit like it had cooties.

I’m not one to view Miranda July’s performance art with any level of awe, leaving me perfectly comfortable to refuse the strained eccentricity of her latest, the thirtysomething malaise opus, “The Future.” This DOA exercise in surrealism and quirk is an especially strenuous sit, forced to watch July work her tedious routine of oddity (keep in mind a cat narrates the story), occasionally grasping blindly for meaning while most scenes dissipate into nothingness, abandoning storytelling to twirl around in a painfully affected manner. July has her fans, an army of admirers who gobble up the filmmaker’s peculiar tastes in symbolism and screen stillness. “The Future” had me sprinting in the opposite direction.

Thankfully, no one outside of some South Korean cinephiles and a few unlucky Netflix daredevils has ever heard of “The Last Godfather,” making this entry more of a warning than a lament. Korean comedy “legend” Hyung-rae Shim (the man who brought the world “Dragon Wars”) decided he wanted to create a gangster farce starring himself, bringing in Harvey Keitel for support, encouraging the actor to soil his once legendary name in an impossibly broad picture. Although it reaches for a customary arrangement of silliness, the feature is exceedingly tiresome and witless, reduced to insipid cartoon gags and desperate fart humor to connect the dots. It’s rare to witness pure wackiness fail on a grand scale. Be thankful you’ve never heard of this trainwreck.

It genuinely hurts to see Adam Sandler lose his mighty goofball grandeur. A man once responsible for a few mighty swings of absurdity is reduced to playing a pair of identical twins in a feature that doesn’t exactly make an effort to sketch out a plot or characters. Coasting on his established box office appeal, Sandler has lost touch with his inner doofus, too rich and too old to recall what made his hungrier efforts such guilty pleasures. Instead of inspired tomfoolery, we’re hit with flatulence and faux sentimentality, watching Sandler chew on a hacky concept, flushing Al Pacino down the career toilet with him. Do me a personal favor and watch “Happy Gilmore” again. Keep that young and invested Sandler in your memories, not the guy who thinks enormous mattress sweat stains are comedy gold.

I Don’t Know How She Does It (review)

While commonly held up as some type of example for womankind, actress Sarah Jessica Parker continually accepts roles that demean the fairer sex, playing whiny females obsessed with consumerism and droopy men. “I Don’t Know How She Does It” extends the sad parade, spinning off into sickening blur of mommyhood blues sealed with an arrogant East Coast attitude. A grotesque dramedy that’s decidedly out of touch with reality and good taste, the picture hangs almost entirely on Parker’s charisma and ability to communicate domestic authenticity, two speeds of the actress ditched long ago, somewhere in the fog of the 1990s. Take the movie as harmless daydreaming and the results are even more odious, with repellent comedy, a confusing narrative device, and ridiculous melodrama destroying every inch of the film’s lasting appeal.

This freewheeling, 3D-blasting actioner was hailed by many as a campy highlight of 2011. I couldn’t join the party, finding the picture’s eccentricities, silliness, and schlock more punishing than uproarious. The tired “so bad it’s good” argument fails here, confronted with a feature that craves grindhouse delights, yet suffers from a distracting self-awareness, making the glossy to-Hell-and-back shenanigans with star Nicolas “Paycheck” Cage relentlessly artificial, winking itself into a dreary, unfunny coma. Camp deserves better than this uninspired, overconfident bomb.

Bucky Larson: Born to Be a Star (review)

Also of note: One Day, The Roommate, Shark Night 3D, No Strings Attached, Beastly, Hobo with a Shotgun, Big Mommas: Like Father, Like Son, Pirates of the Caribbean: On Stranger Tides, Friends with Benefits, Abduction, Spy Kids: All the Time in the World, Snow Flower and the Secret Fan, Madea’s Big Happy Family, Something Borrowed, and The Darkest Hour.