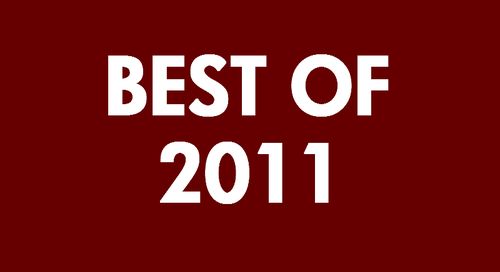 It took co-writer/director Alexander Payne seven years to return to the screen, but “The Descendants” was certainly worth the wait. Achingly human with a sly sense of humor to keep the grief-stricken mood approachable, the feature is easily Payne’s finest hour as a filmmaker, maintaining a tight command over slippery tonal changes and intimate emotional purging, while guiding star George Clooney to one of the finest performances of his career. Of course, Hawaiian locations are always a treat to get lost in, yet the feature wisely deconstructs the allure of the islands, providing something of an education to go along with all the heart-wrenching, laughing-through-the-tears developments. It’s a lovely picture, exceptionally acted and crafted from top to bottom.

With a logically iffy, hopelessly repetitive sci-fi premise, “Source Code” could’ve quickly soured, burning itself out trying to make the whole shaky enterprise click as intended. Instead, under the extreme care of director Duncan Jones, the feature hit searing emotional beats while burning through splendidly executed suspense sequences, spinning through time and consciousness, sold with impressive array of mid-budget visual effects. Although thrilling all the way, “Source Code” did retain a startling sincerity, helping the effort to register as something more than a basic buckle-up thrill ride experience.

Drenched in gooey synth and dressed up in sharp Los Angeles style, “Drive” was an immersive, effortlessly cool stroll through the revenge genre. Director Nicolas Winding Refn struck a meditative tone of encroaching danger, boldly fitting star Ryan Gosling in a satin jacket, pushing his brooding character out into a menacing world of double-crosses and dangerous streets. While an exercise in widescreen style, “Drive” captured an irresistible ambiance of silent nobility and automobile majesty, packaged with just the right amount of sleek and sexy to keep viewers riveted.

At the start of 2011, I couldn’t stand screenwriter Diablo Cody and director Jason Reitman. At the end of 2011, I’m pronouncing “Young Adult,” their second collaboration, to be one of the best pictures of the year. And all it took to encourage the seismic shift in opinion was a little nastiness spread around small-town Minnesota in the form of a hair-pulling, booze-gulping demon in a tight dress. Punting away her affectations, Cody plunged ahead with this venomous work, daring to appreciate the complexity of a sociopath, scripting a sneaky black comedy loaded with detail, acid, and appreciation for the gut-punch of adulthood. Reitman was smart enough to stay out of her way.

Religion is a sensitive subject matter, a difficult plow for any filmmaker. Actress Vera Farmiga absolutely nailed the elusive essence of faith in her offbeat directorial debut, a semi-conscious odyssey of heavenly questioning and domestic urgency. Superbly executed with a satisfying low-budget style and scripted with respect and care for the beliefs on display, “Higher Ground” reached a rare position of sexual and spiritual exploration without need for condemnation or provocation -- a candid, intelligent, and graceful picture.

Parents of the world, you disappoint me. Instead of seeing this delightful, traditionally animated G-rated adventure with everyone’s favorite sticky-pawed bear, you took your kids to see “Cars 2.” Bravo. You chose surprisingly robust violence, bathroom gags, and Larry the Cable Guy over a wonderfully scripted, charmingly scored romp with beloved old friends -- a movie filled with storybook affection, visual creativity, cordial humor, and an elusive blast of family film authenticity. Now go apologize to your children for this hideous oversight.

Rarely do movies scare me anymore. Consider it a downside to the see-it-all-and-see-it-now life of a film critic. It takes something special to send a chill down my spine, and “Black Death” managed to stop my heart, using a ferocious tone of medieval witch hunting to explore all manner of torture and agony, sculpted in an artful manner that extracted waves of fear and disgust. There are no monsters, slashers, or ghouls here, just the hostility of humankind fueled by religious fervor and lust for power, unleashed during a chaotic time of rumor and indescribable violence. “Black Death” is troubling to watch, but penetrative in a manner unusual in today’s oversaturated horror marketplace.

I’m generally a sucker for baseball movies, making “Moneyball,” a feature that contains very little baseball, a puzzling triumph. In place of stolen bases and home runs, the picture explored managerial techniques and interpersonal relationships with the participants, encouraging a greater understanding of how baseball is truly played these days. Unexpectedly humorous and heartfelt, “Moneyball” led with an enthralling concentration on the fine details, from the isolation of stadium life to the brutal system of trading players, also boasting two disarmingly animated performances from Brad Pitt and Jonah Hill. “Moneyball” was baseball without the baseball, and the sport has never been more beguiling.

Rising above its simple description as “The Cancer Movie,” “50/50” blended the realism of medical treatment with the semi-comic touch of personal endurance, finding a soul and a few laughs while walking down a potentially gloomy path. Star Joseph Gordon-Levitt sold the confusion and isolation like a champ, infusing the screenplay a raw energy it didn’t otherwise possess. Although confronting a crippling event, “50/50” found a beautiful complexity to best approach its collection of cancer treatments and broken hearts, making sure to provide human characters and a necessary dollop of hope.

Woody Allen has made a few spectacular pictures in recent memory. With “Midnight in Paris,” the legend rediscovered his love of whimsy, creating a mischievous ode to the comfort of nostalgia and the fantasy of time travel. Expectedly hilarious, “Paris” reclaimed a mischievous side to Allen’s sense of humor that’s been lost for quite some time, setting a playful tone that did wonders to distribute the pixie dust collecting on the top of the delightfully absurd plot, while making star Owen Wilson palatable in a manner unseen on the big screen since 1996. Rewarded with the filmmaker’s largest box office haul, “Paris” straightened Allen’s pop culture posture, restored faith in his comedic instincts, and revived interest in his upcoming efforts. Now there’s some real magic.