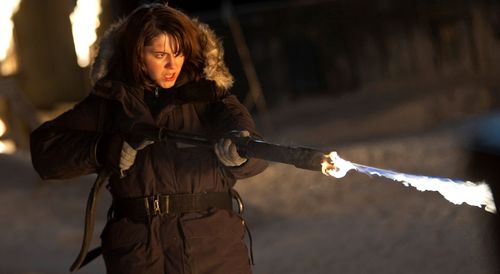 “The Thing” is a prequel to a 1982 feature titled “The Thing,” itself a remake of “The Thing from Another World,” from 1951. It’s a complicated nest of titles, though the 2011 “Thing” doesn’t really have any inclination to tie into the previous “Thing” until the climax. The rest is just the same old “Thing,” essentially reheating elements from the old “Thing” to sell a new “Thing” to younger audience members who haven’t had the pleasure of viewing John Carpenter’s classic tale of paranoia, monsters, and avoiding...things. If it sounds like one “Thing” too many, you’re right, as the 2011 “Thing” brings nothing new to the table besides unnecessary explanation and an abundance of iffy CGI, muting the terror potential by playing everything obvious and lifeless. The new “Thing” is nothing like the old “Thing.” Read the rest at Blu-ray.com 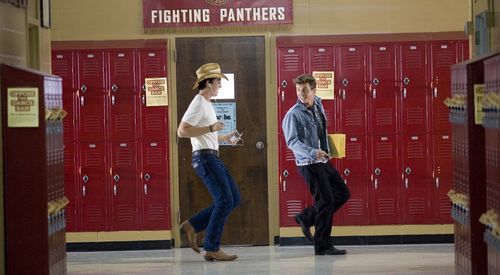 Why would “Footloose” be up for the remake treatment? While plenty of years have passed since its 1984 theatrical debut, the movie still feels like a fresh slice of teen fantasy, infused with an iconic soundtrack and a blissful sense of the zippy MTV era in which it was created. 2011 serves up a modern take on an elderly tale, and there’s actually some imagination in the director’s chair as Craig Brewer (“Hustle and Flow,” “Black Snake Moan”) takes the wheel, tasked with bringing the boogie up to date without disrespecting a feature film that’s prized by so many. “Footloose” turns out to be entertaining, sporadically delightful, but like most reheats, it lacks the essential sense of surprise found in the original picture. It has its highlights, but the production feels more like a corporate decision than a cartwheeling spell of creative expression. Read the rest at Blu-ray.com

“Father of Invention” is a mischievous idea in search of a stronger motion picture. It’s best as a comedy, permitting the colorful cast a chance to play against type with broad but friendly characters. Unfortunately, co-writer/director Trent Cooper keeps positioning the feature as a family drama, looking to tug heartstrings when something frothier was in order. I enjoyed sections of “Father of Invention,” but it’s an effort drawn to mediocrity, ignoring wonderful comedic opportunities to make yet another relationship story between a humiliated father and his distrustful daughter. I wish there was an invention to help alleviate the nauseating effects of tuneless melodrama. Read the rest at Blu-ray.com

Sam Shepard is an accomplished artist, but as an actor, he’s occasionally a little uninspired. Requiring strong material to perk up his instincts, Shepard has hit a few highlights during his career, working with Philip Kaufman on “The Right Stuff” and Wim Wenders on “Don’t Come Knocking.” Regardless of a few professional peaks, he always seems to be stuck in some type of militaristic role, forever playing reserved characters of deteriorating authority. “Blackthorn” offers a fresh reason to remain invested in Shepard’s long and winding filmography, providing a meaty role and an irresistible western formula to flare his screen charisma in full. He’s terrific in a movie that needs his unique thespian touch. Read the rest at Blu-ray.com 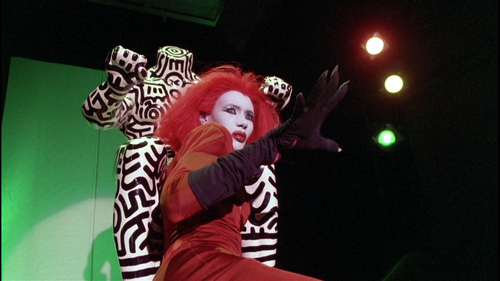 "Vamp" is a difficult movie to explain, falling under the jurisdiction of various genres and cult fandom. It's a horndog teen comedy laced with horror and suspense, yet spends a large portion of its running time working out dramatic encounters between characters undeserving of the attention. What the effort does have is a few successful scenes of oddity, one charming supporting performance, and the sheer spectacle of performance artist/singer/actress Grace Jones, who provides the film with infinite weirdness, stirring up the feature without a single line of dialogue. Despite a premise loaded with potential for some delightfully unsavory business, "Vamp" has no bite, too encumbered by its limited budget and woefully misguided when it comes to imagining utter sexual supremacy. I'm all for Grace Jones pawing at herself in a metal bikini and kabuki make-up, but "Vamp" lacks stimulating screen energy, looking to get by with the bare minimum in terms of horror, comedy, and pole-twirling sin. Read the rest at Blu-ray.com 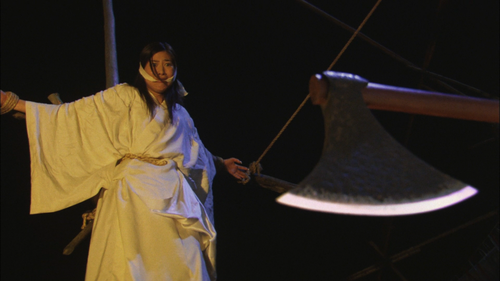 The official synopsis for the Japanese film "X Cross" details a vicious story where crazed pagan men chase around helpless young girls, attempting to sever their legs and offer the bloody prizes to their deity. Understandably, this rundown conjures images of dank cinematography, porno-level acting chops, and a diseased interest in the prolonged suffering of women -- not exactly an inviting viewing event. To my great surprise (and deepest relief), "X Cross" is actually nothing sinister, passing on the tempting opportunity to make a low-budget commotion with repulsive ingredients. Instead, it's a spunky, darkly comic creation with a refreshingly limited amount of agony to share. A few legs are indeed violated, but the production is more interested in the peppy particulars of rural survival and sisterhood, creating a superbly entertaining comic thriller with a few well placed twists and turns. Read the rest at Blu-ray.com

Sunday in the Park with Brian - Sea World Spooktacular 2011 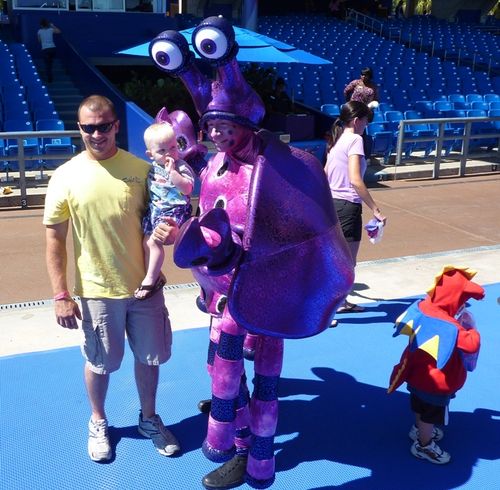 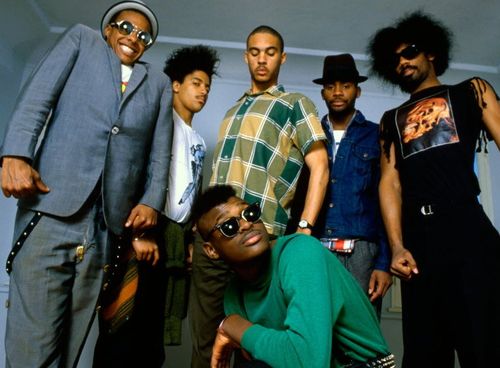 As a musical entity, Fishbone was unlike anything seen before. A fusion of funk, ska, punk, and metal, the band blazed the music scene sharing frantic, glorious sounds, sold with some of the most animated live performances around. They’re legends, yet never quite achieved the worldwide popularity required to shape raw talent into a viable business. Instead, the crew scrapped and slugged their way to the middle, creating an intense, intriguing narrative of backstage creation and erosion, captured superbly in “Everyday Sunshine: The Story of Fishbone,” a documentary that probes the current state of the group while tracking their origins and industry challenges.

“Melancholia” is a disaster movie, though it doesn’t resemble the work of Irwin Allen or Roland Emmerich. There are no near misses or romantic melodrama, and the Capitol Records Building remains intact for the duration of the picture. This is Lars Von Trier’s opportunity to stage the end of the world. With the effort comes a flood of misery and doomsday terror, expressed with incredible visuals and a refreshing sense of detachment to monumental planetary chaos. In fact, it would make a corker of a double feature with “2012” -- one movie using widespread death to entertain the popcorn-munching masses, the other examining increasing mental clarity as a dire situation greets a soothing psychological position of utter despair. Read the rest at Blu-ray.com 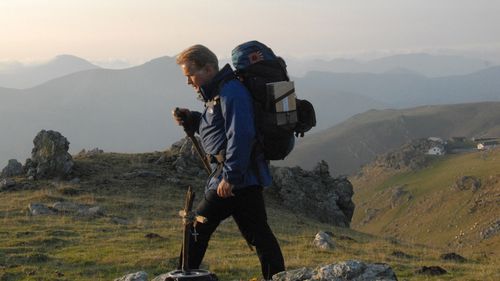 After all these years, I sort of forgot Martin Sheen can really act. Not that his work has ever been less than stellar, but there’s a hardness he’s perfected on television and film over the last few decades, a posture of authority that’s convincing but curiously repetitive. “The Way” features the finest Sheen performance in quite some time, refined yet superbly vulnerable, and who better to draw the man out of his shell than his own son, writer/director/co-star Emilio Estevez, who crafts an elongated, yet emotionally resonate story of man taking to travel to soothe his fractured soul. Read the rest at Blu-ray.com

Film Review - The Ides of March 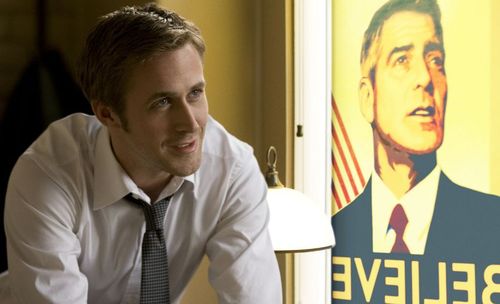 Considering the troubling times we’re currently stewing in, “The Ides of March” has been released at an opportune moment, tempting the discontented with a story of utter political corruption. Of course, we’ve been here before, with cinema always there to expose the evils of ambition, especially when it concerns the fanged machine of Washington. The feature is a perfect fit for co-writer/director/star George Clooney, who constructs a decidedly modern take on underhanded business, yet channels the moviemaking masters of 1970s to help reach an unsettling position of stillness, watching as corrupt men and women slowly come to the realization that they’ve lost their integrity. It’s a sharp, satisfying plunge into duplicity, perhaps Clooney’s most intriguing offering as a filmmaker. Read the rest at Blu-ray.com 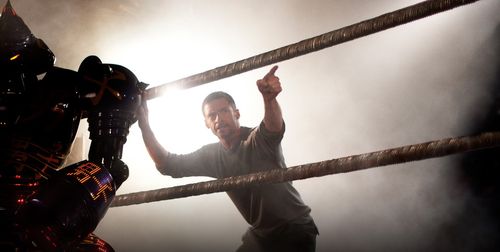 To appreciate the clunky charms of “Real Steel,” one must accept a bizarre premise that finds the citizens of futuristic America clamoring to watch robots engage in boxing matches. It’s a ludicrous plot befitting an absurd motion picture, but one that at least makes the attempt to be more than just a simple metal-crunching exercise in mindless violence. Youngsters will surely get a charge out of “Real Steel,” but anyone who’s spent time attending movies over the last 40 years will be able to predict every turn of this script, every beat of the performances, and every last swing of the sock-em robots. It’s a film of unbearable formula and occasional stupidity. Read the rest at Blu-ray.com 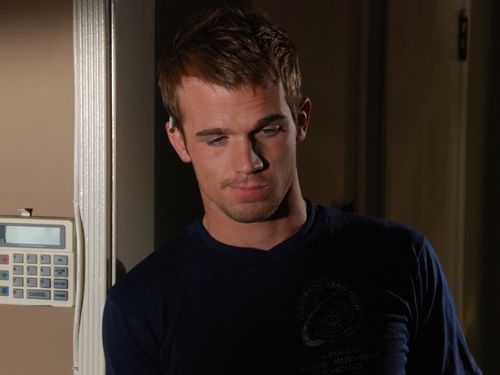 Taking on the world of astrology is an appealing launching point for the drama “Five Star Day.” Numerous movies have made the effort to celebrate the discipline, using the stars to backdrop tales of love and woe. However, “Five Star Day” has a bone to pick with the industry, with writer/director Danny Buday using a confrontational tone to uncover a rather tender story of human connection, following one man as he seeks to unearth a purpose for astrology, to test its validity in an increasingly cynical world.

By dramatizing the life and times of biker-turned-angel Sam Childers, Hollywood is offered a golden opportunity to explore an inspirational, church-based tale intended to lift the spirits of the audience, while also leaving plenty of room for some butt-kicking action sequences along the likes of a “Rambo” motion picture. Instead of tears, “Machine Gun Preacher” cries bullets, an interesting twist on the “white man saves all” genre, but not subversive or insightful enough to rescue an otherwise limp, muddled biopic about a baffling man saving Africa once orphan at a time. The feature is well-intentioned, but its choice of director is all wrong. Read the rest at Blu-ray.com

At this point, Gus Van Sant either makes completely impenetrable cinema for display on his own IKEA shelf of esoteric achievements (“Elephant,” “Paranoid Park,” “Last Days”) or he slips into mainstream mode, working with name actors and poignant material, creating features intended to be appreciated by a larger audience (“Milk”). “Restless” is an attempt to find a middle ground between approachable and cryptic, but it’s mainly affected, disastrously so, to a degree that’s unimaginably punishing. Allegedly a soft tale of lost souls connecting in the dusk of life, “Restless” instead feels like an Urban Outfitters catalog shoot, boasting two intolerable lead performances from young actors who treat extraordinary trauma as a lazy Sunday afternoon acting school exercise. Read the rest at Blu-ray.com

Sunday in the Park with Brian - Universal's Halloween Horror Nights 2011 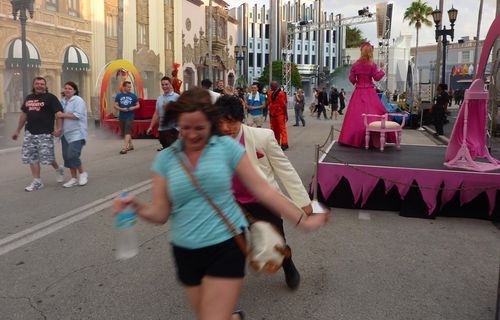