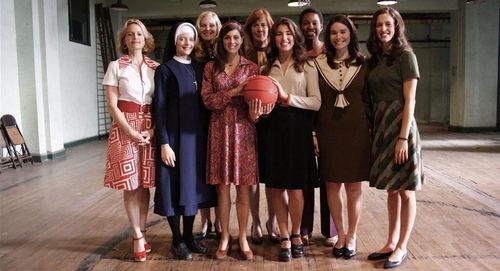 As a film critic, I’m painfully aware that “The Mighty Macs” is one ridiculously clichéd piece of work. As a filmgoer, I was charmed by the G-rated gentleness and interest in providing young female audience members with a portrait of empowerment, free of heady sexual overtones. It’s not a remarkable movie by any stretch of the imagination, yet “The Mighty Macs” is good, clean entertainment for the whole family, snapping spare parts from hundreds of sports pictures together, fashioning a slight, but genial feature that should appeal to viewers hungry for lighter fare that isn’t animated.

As the wife of NBA referee Ed Rush (David Boreanaz) in 1971, Cathy Rush (Carla Gugino) is facing a dispiriting future as a homemaker, unable to pursue her dreams. Reaching for an opportunity, Cathy takes a job coaching women’s basketball at Immaculata College, a Catholic school on the verge of financial collapse, much to the frustration of Mother St. John (Ellen Burstyn). Handed a team of indifferent young women, Cathy is determined to turn the squad into something special, assisted by Sister Sunday (Marley Shelton). While heartbreak and humiliations are encountered, The Mighty Macs gradually come together as a force on the court, managing to topple intimidating opponents, offering Cathy an opportunity to shine while uniting a school in desperate need of a miracle.

“The Mighty Macs” is based on the true story of Cathy Rush, an ambitious woman who overcame severe gender and financial limitations to turn a nonexistent Immaculata team into a tight basketball unit over the course of the 1970s, using her confidence to instill a passion for unity in the squad. The plot is pure Disney fluff, but Rush’s coaching determination and frustrations provide something for writer/director Tim Chambers to work with, though the filmmaker doesn’t exactly supply a challenging viewing experience with his movie. Instead, he’s made comfort food; a production serving up bite-sized offerings of triumph and struggle, stuffed inside a generic tale of basketball education.

The feature is predictable, tracking Cathy’s efforts to whip her team into shape, using punishing drills, pep talks, and general female companionship to get her ladies to a place of utter devotion, to one another and the sport. There’s also pressure emerging from the school, with frosty Mother St. John attempting to stall closure, eventually won over by the performance of the team, using their victories to drum up support for the campus. Chambers assembles a disjointed picture at times, glossing over details involving the students and their disruptive personal lives (only fragments of personality remain), while Cathy’s journey as a coach feels condensed, losing complication in an effort to hit the game sequences faster. “The Mighty Macs” could’ve used more depth and a broader scope of participation, providing an authentic pulse to the Immaculata drive, understanding how the team truly bonded. Instead, Chambers leaps from moment to moment, only seizing a flimsy appreciation for character development, losing feel for compelling narrative flow. 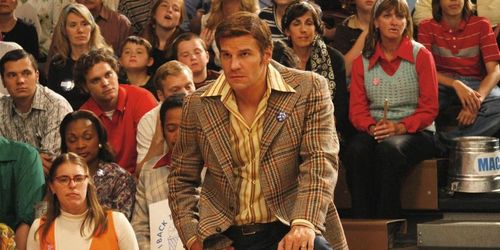 Keeping the movie alert is Gugino, who offers the feature a spark that sustains interest in the progression of the Mighty Macs. Authoritative and vulnerable, the actress locates a heart underneath the formula, giving a reasonable read of Cathy’s dissatisfaction with gender dismissal, using her time with the team to help guide these young women beyond their domestic situations. She also provides necessary firepower during the game sequences, delivering locker room speeches and courtside instruction with plausible authority. Also appealing is Shelton, here is a supporting role as a nun experiencing a crisis of faith, enlivened by the gamesmanship. The actress adds a needed sensation of humanity to the film.

“The Mighty Macs” holds no surprises, and anyone with even a mild moviegoing habit will be able to predict every turn of the script. However, the clichés are acceptable when the film hits a solid run of enthusiasm. Themes of confidence and self-reliance are also welcome, making the feature perfectly appropriate for younger female audiences in dire need of positive reinforcement. It’s not a particularly robust cinematic effort, yet “The Mighty Macs” is a pleasant picture with its heart in the right place 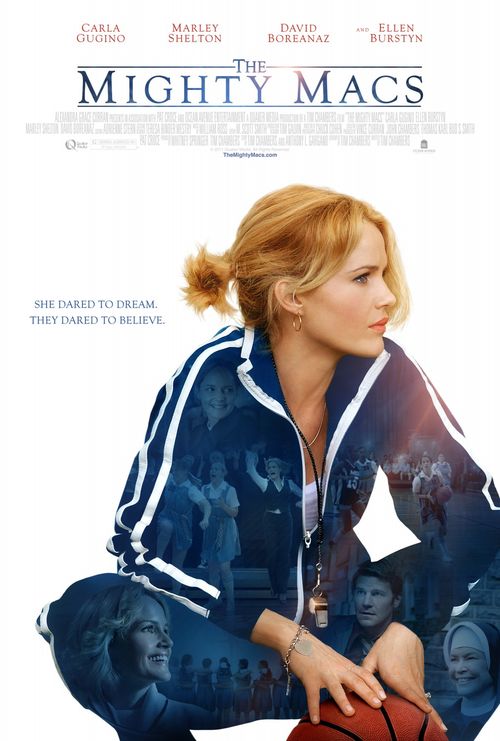