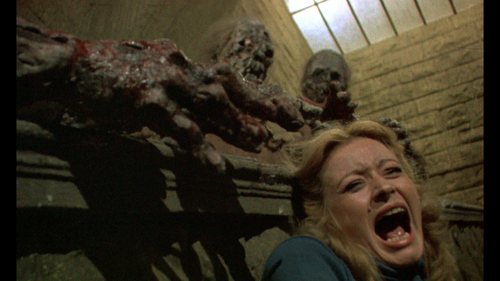 A zombie movie just isn’t a zombie movie without endless close-ups of rotting flesh, idiot lead characters incapable of summoning even the most basic of survival skills, and a brief subplot involving incest. Well, at least this is the type of unusual viewing experience “Burial Ground: Nights of Terror” (originally released in 1981) offers to hungry genre fans. An undeniably sluggish though pleasingly wacky gore show, the film is ripe with peculiarities and amusing inconsistencies, almost enough to make up for the complete lack of suspense. Almost. Nothing cuts the boredom of a flaccid zombie stomp quite like a creepy young boy coming on to his bewildered, not yet entirely disapproving mother. It’s that type of insanity that makes a forgettable picture into something one wants to share with the world. Read the rest at Blu-ray.com