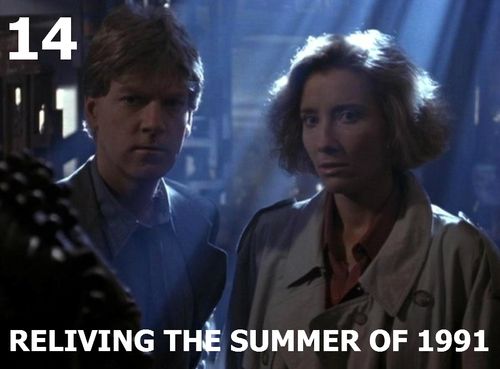 Dodging scissors with “Dead Again” and saddling up a steel horse with “Harley Davidson and the Marlboro Man.” 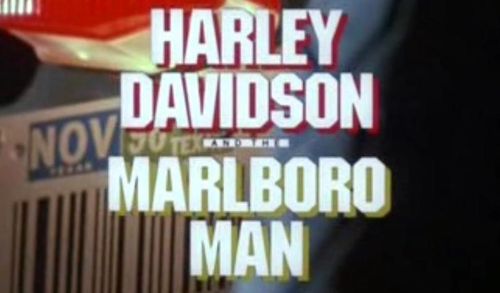 Harley Davidson and the Marlboro Man

Nutshell: Two longtime friends reunited after an extended period of separation, Harley Davidson (Mickey Rourke) and Marlboro Man (Don Johnson) are eager to reignite their partnership, relaxing back at their favorite bar, surrounded by fellow cowboys and outlaws. Dealing with the future world of 1996, the boys are horrified to learn their watering hole is about to go under, facing a crippling lease renewal. Agreeing to rob a bank to pay for their home away from home, Harley and Marlboro accidentally hijack a shipment of “Crystal Dream,” an ocular drug peddled by corporate banker Chance Wilder (Tom Sizemore). With Chance’s goons on the hunt for the duo, Harley and Marlboro hit the road, looking for a way to turn these blue bricks into green cash. 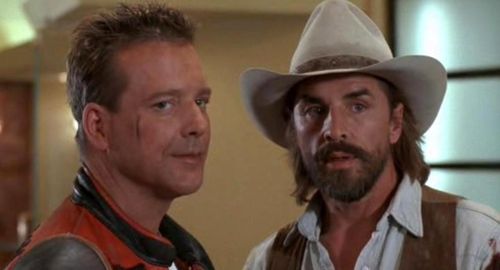 1991: Don’t look at me, I have no idea how a film like this managed to slip into production.

I’m sure it appeared irresistible from a safe distance, offering an eye-catching title (which came to create legal problems for MGM) and plum parts for two disheveled lead actors. Who wouldn’t see an actioner that essentially updates “Butch Cassidy and the Sundance Kid,” only instead of the old west, the new adventure would be set in a futuristic version of L.A., where gas is $3.99 a gallon (never!) and Burbank is now an airport. Pop Kevin Costner and Bruce Willis into this greasy thing and the box office would simply explode from all the ticket sales.

Would you settle for Mickey Rourke and Don Johnson? 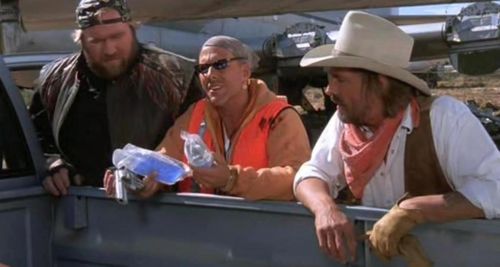 I suppose there was a sensation of fatigue surrounding the release of “Harley Davidson and the Marlboro Man,” even in 1991. Caught in the transition period between seedy actioners from the 1980s and the glossy material developed in the early 1990s, the picture was a snoozy effort of tepid shoot-outs and cranked displays of masculinity, scripted as a modern western, with motorcycles replacing horses as the transportation of choice. Here, men could be men, trading war stories while sleeping with anything that moves. It’s a film with caveman parts that should’ve appealed to me at the time, but somehow missed its target. Instead of reducing me to blushes and grunts, the feature semi-bored me. I felt a touch distracted by its peculiar style and poise instead of mesmerized by an unrelenting pace. The stabs at comedy didn’t persuade much either.

The feature didn’t delight at the time, landing in a deadening space of mediocrity that would come to doom it at the multiplex. The picture bombed hard and was swept away within weeks. There would be no second ride for Harley Davidson and the Marlboro Man. The public just didn’t care. Frankly, considering the lethargy of the marketing, it appears the studio was anticipating rejection. 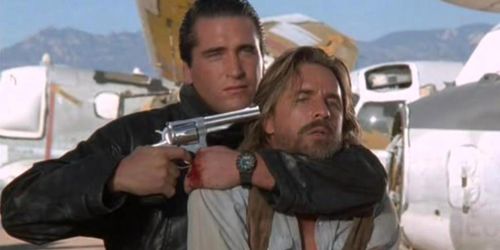 2011: “Harley Davidson and the Marlboro Man” isn’t a terrible motion picture. There’s definitely a barbed personality to the screenplay, brought to life here as a half-realized futureworld of brand names (other characters go by Virginia Slim and Jack Daniels) and costume design, playing like a production that lost its nerve when it came time to commit in full to the idiosyncrasy of the page. The kookiness seems at war with the action beats, leaving director Simon Wincer powerless to keep the feature moving along, unable to lock into persuasive tone.

Opening loudly with Bon Jovi’s “Wanted Dead or Alive,” the feature doesn’t downplay its affection for the cowboy genre. Having already steered “Lonesome Dove” and “Quigley Down Under,” Wincer had done his homework, taking care to establish the roughrider ambiance of the picture, with leathery man riding dusty bikes along empty highways. They wield weapons and drink hard, keeping brotherhood a number one priority. Marlboro even has daddy issues, ye-haw. The engorged atmosphere of the film is necessary, certainly with a plot that covers a bank robbery committed to sustain a bar lease. It’s a silly movie, but convincingly sold in spurts. It’s certainly best when there’s no dialogue to dodge, leaving the wacky visuals alone to communicate the moment. 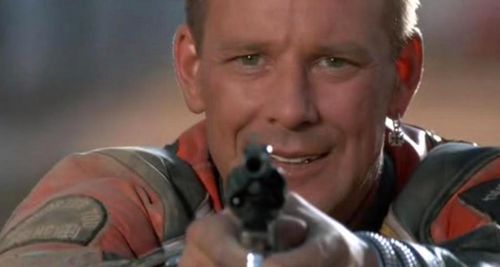 Unfortunately, once the characters do speak (or grunt), the picture goes from passable to idiotic, with the likes of Rourke (who’s publicly disowned the film), Sizemore, and Daniel Baldwin (here as Wilder’s leather-wrapped enforcer) barely staying awake. Johnson seems like he’s having fun, managing to score a few chuckles, convincingly articulating his good ol’ boy character. Still, the acting is rather unpleasant and the chemistry between the leads is nonexistent. Rourke and Johnson fail to credibly play squinty soulmates, looking as though they hurriedly went their separate ways once the cameras cut.

And forget about strong female characters in this thing. The only decent role belongs to Chelsea Field, who plays a motorcycle cop addicted to Marlboro’s hot cowboy lovemaking. Everyone else is either topless or a squealing nuisance (Vanessa Williams, I’m looking at you). 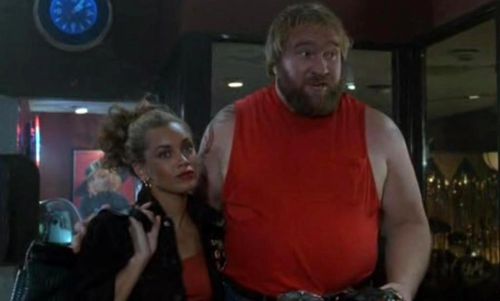 Once the bullets start to fly, “Harley Davidson and the Marlboro Man” dissolves into routine, with wisecracks and explosions padding screen time. Wincer struggles to keep the film alert with wild locations including a casino rooftop and an airplane graveyard, but the energy is unquestionably lacking. Rourke and Johnson just aren’t plausible ruffians -- two charming A-holes with a conscience, resisting the miracle of personal hygiene. At least they aren’t the proper brawny, battered brutes the script requires. They’re a little on the soft side. Just don’t tell Mickey Rourke I wrote that. 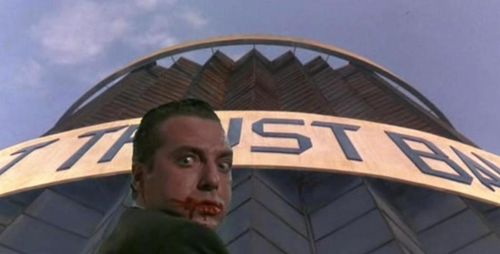 Nutshell: Amnesiac Grace (Emma Thompson) needs help decoding her identity, requiring the detective services of private investigator Mike Church (Kenneth Branagh). Troubled by visions of a murder from the 1940s, Grace finds help from Franklyn (Derek Jacobi), an antiques dealer skilled in the art of hypnosis. In the dark corners of her mind, Grace explores the tumultuous marriage of composer Roman (Branagh) and Margaret (Thompson), who was killed brutally, stabbed to death by a pair of scissors, a crime that sent Roman to death row. Hoping to uncover the source of her hysteria, Church discovers a winding path of past lives and vengeance, necessitating the assistance of a former psychiatrist (Robin Williams) to help sort it all out. 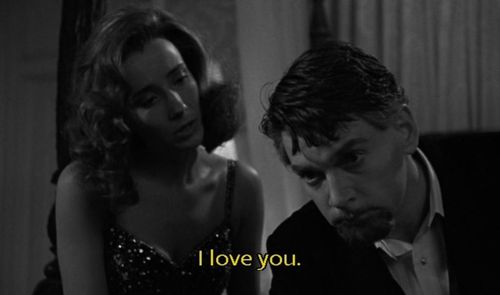 1991: Today, we view Kenneth Branagh as a seasoned director of unusual fare, often fondling his gift for Shakespeare interpretations. In 1991, the helmer was something of a new toy, bursting upon the scene a few years earlier with his triumphant reworking of “Henry V.” Suddenly the young man (he was 29 years old at the time) was the toast of the town -- audiences and studio executives were wholly impressed with his ability to make classic material sparkle in a completely new light. Branagh made a Shakespeare play into a financially successful, heavily lauded feature film event. Of course Hollywood was going to start knocking on his door.

“Dead Again” was Branagh’s big mainstream debut, starring and directing a homage to film noir, gifted a modern spin with a script by Scott Frank and a cast of experienced actors known for some degree of instability. It’s was an odd package, but one that Paramount believed in, selling it with an unusual poster and a trailer that pushed the murder mystery overtones beautifully. In a late summer crammed with action flicks and dopey comedies, “Dead Again” was established as prestige, offered to audiences craving a leaner cut of moviemaking, cooked to near perfection. 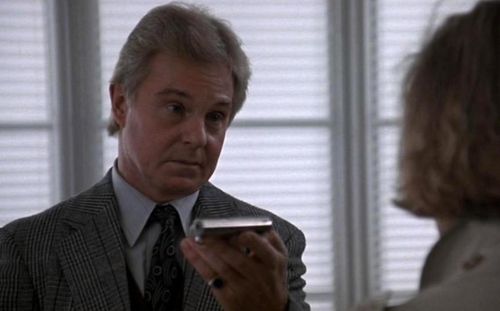 “Dead Again” impressed me greatly at the time, providing end-of-the-season thrills and chills with a slight English spin, lending the picture a screen regality it wouldn’t otherwise possess. The Brichives praise the ending and label the movie as “well done,” and I was smitten with Branagh’s unpredictability, especially during a film education era of my life where I hadn’t been exposed to the features that inspired it. “Dead Again” hit me fresh and it hit me hard, even spawning a catchphrase I still bust out these days -- Roman’s devious pronouncement of scissor-born doom: “These…ARE FOR YOU!” 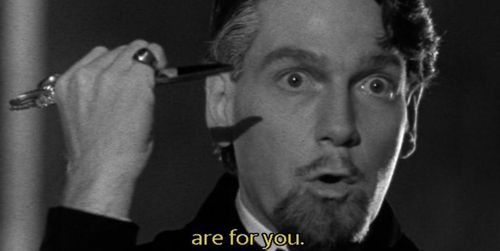 2011: There’s a very youthful determination to “Dead Again” that’s utterly bewitching. The term “Hitchcockian” is thrown around quite often in film criticism (myself included), yet Branagh comes dangerously close to replicating the master with this feature, staging a baroque puzzle with an emphasis on grand movements of suspense and realization (scored with tornado-like sensitivity by Patrick Doyle). It’s a restless yet highly organized effort, displaying the director’s desire to not just passively assemble a movie, but to rattle the senses as well. 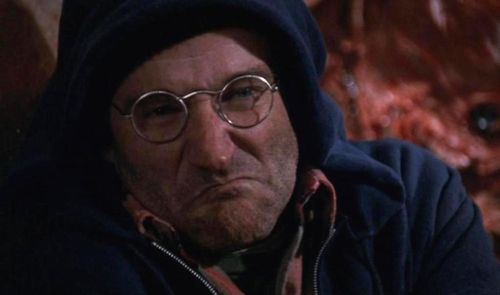 The screenplay is ludicrous but utterly convincing, assembled as a disorienting spin around the karmic carousel, employing leaps in time and twisted motivations to keep audiences alert and exhilarated. It’s a tad easier to resist the more emphatic elements of the performances, but I must admit, this picture retains quite a roar thanks to Branagh’s operatic direction and cracking pace. It’s a terribly entertaining film of insane passions and eye-crossing encounters, yet the story miraculously never derails. Frank and Branagh stay grounded and focused within this world of scissor slashings and doomed love. “Dead Again” remains contained and direct, even while filing through various supporting characters and star cameos (Williams adds refreshing salt to a fairly tasteful thriller). There are no delusions of grandeur here, just heaping helpings of tension, presented with a few spooky edges and a romantic glow. 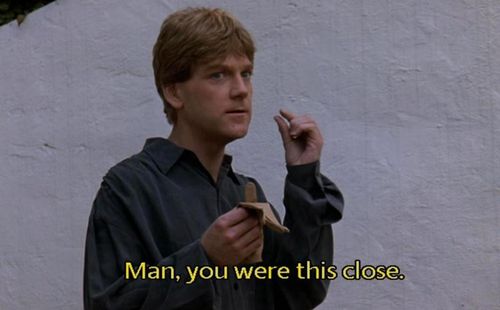 Instead of reinventing the noirish mystery genre, Branagh elects to have fun with his time in the sandbox, creating a richly satisfying celebration of death and dishonor. I appreciate the relative simplicity of the film now more than ever.

Of course, the B&W/color theatrics and murderous layers of suspicion are marvelous, but what truly sells “Dead Again” is Branagh, doing an entertaining impression of a rumpled hard-boiled detective, topped off with a chewy American accent. It’s enjoyable to watch the actor work up a sweat in every scene, selling the gobsmackery of Church as he keeps stumbling into bolder revelations about himself and the case. He also shares solid chemistry with real-life wife Thompson, herself making an Americanization leap that’s less pronounced, but still so alien. The balance between the time periods is splendidly communicated by the actors, yet I’m partial to the cigarette-sniffing ways of Mike Church and his slack-jawed reaction to every twist and turn of this wild tale. It’s a wonderfully committed performance. 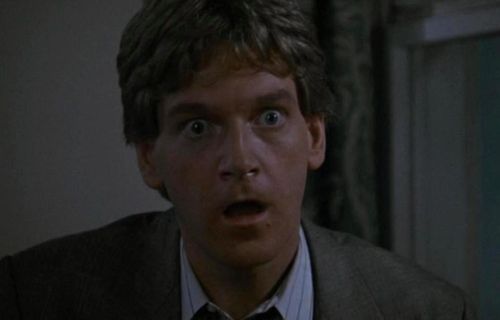 Branagh would go on to apply his frenzied approach to films of varying quality (“Mary Shelley’s Frankenstein,” “Hamlet,” “Thor,” “Much Ado About Nothing”). While winningly flamboyant, his later efforts never quite matched this hungry whodunit. It’s such a pleasurable viewing experience, lean and eager to please. Just a perfect note to close the summer on.