Film Review - Rise of the Planet of the Apes 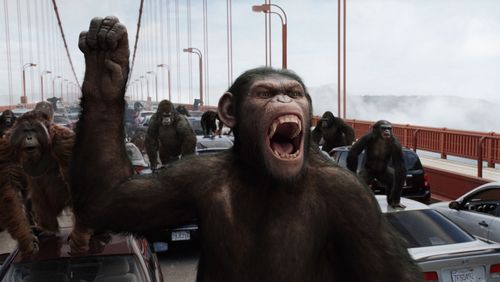 After five motion pictures, two television series, and a 2001 Tim Burton remake, it seems a prequel is the only logical place to go in the exhausted “Planet of the Apes” saga. The origin tale of apes and their early stages of domination is surprisingly fertile ground for the producers, who loosely rework 1972’s “Conquest of the Planet of the Apes” into “Rise of the Planet of the Apes,” a frequently thrilling, emotionally resonate reboot that takes advantage of today’s vibrant motion capture technology to help articulate the complexity burning within these damn dirty apes.

An ambitious San Francisco scientist, Will (James Franco) is looking to cure Alzheimer’s Disease with a special virus tested extensively on apes. When his star experiment is killed, the baby chimpanzee left behind is put into Will’s care, brought home to help comfort his ailing father (John Lithgow). The chimp, now named Caesar (performed by Andy Serkis), grows into an obedient pet with a heightened intellect, eternally curious about the outside world. When his protective instincts threaten community safety, Caesar is placed into a harsh primate facility run by John Landon (Brian Cox) and his abusive son Dodge (Tom Felton, Draco Malfoy from the “Harry Potter” series), soon subjected to intimidation and violence from the staff and his fellow inmates. Losing faith in humanity, Caesar longs for freedom, looking to harness the power of Will’s virus to generate an army strong enough to overthrow his human captors.

While rooted in prequel elements, “Rise” supplies a clean start for the moldy brand name, returning the story back to a single ape and his impossible dream of liberation. The conflict is familiar but the visual scope of the picture has been sharpened, thanks to decades of hindsight and the use of mocap technology to bring Caesar and his kind to life. No more actors in stiff masks and make-up, “Rise” introduces a fluid CG-assisted sense of animal existence, blending Serkis’s performance with an artificial, yet highly convincing ape makeover. The transformation is riveting, displaying both exceptional realism and cinematic texture. 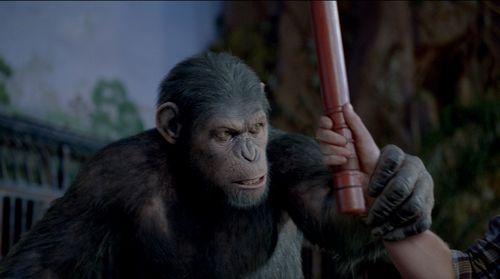 The “Apes” pictures have always taken special care with social and political messages, with “Rise” a fine addition to that tradition, subjecting Caesar to imprisonment and abuse, detailing the darkening of his soul and his growing distrust of humans. It’s a potent message of animal treatment, sold with exceptional clarity by Serkis, who generates a rich, soulful life within the main character, communicating Caesar’s longing for liberty and his developing sense of caution, which results in defensive behaviors he never exercised in Will’s suburban care. The dramatic arc for this exceptional chimp is superbly rendered by the production, with opening acts of soaring playtime wilting into caged cruelties and guarded ape mobilization, provided a stylish visual punch by director Rupert Wyatt, who maintains the widescreen size of the prequel without losing its critical feel for internal reflection.

The apes take center stage in “Rise,” with much of the movie devoted to heated animal behaviors, wordlessly articulating Caesar’s growth from passivity to general (using cookies to unite his army). The ape business is so convincing, the human characters merely block the view, with Franco, Frieda Pinto (playing Will’s drippy love interest), and Felton turning in disappointingly wooden performances, unable to electrify the tremendous expositional needs of the screenplay. Anytime the focus is pulled away from Caesar and his master plan of ape recruitment, “Rise” turns clumsy and forced. 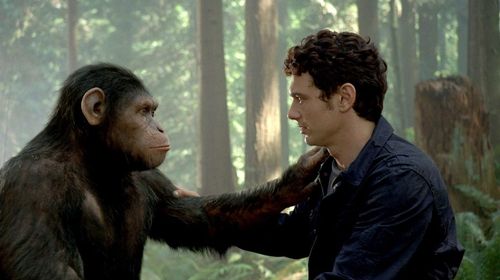 The last act of the feature is entirely devoted to the apes and their, well, rise. Storming San Francisco, the furry soldiers create enthralling havoc, though the script is careful to underline Caesar’s handle on passive resistance, leaving the gun-happy killing to the damn dirty humans. It’s a whirlwind sequence of panic and growly ape craze that Wyatt choreographs skillfully, retaining the necessary chaos without losing the action to a big black blur of car-bouncing, tree-swinging madness. Also amusing (and unbelievably corny) are the film’s numerous references to the original “Apes” pictures, with most (not all) of the inside jokes handled gracefully.

“Rise of the Planet of the Apes” shows precision with its origin world and creativity with its hulking stars. It’s a victorious relaunch of the franchise, a fact reinforced by the open ending, which leaves plenty of room for the apes to continue on their way to global supremacy. Although the 1968 Charlton Heston classic remains untouched, this slightly new direction in ape rule promises interesting developments and a rowdy overthrow to come. 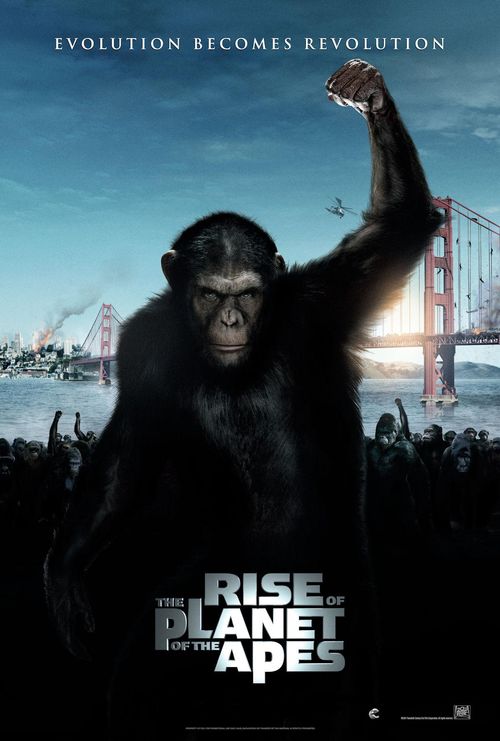