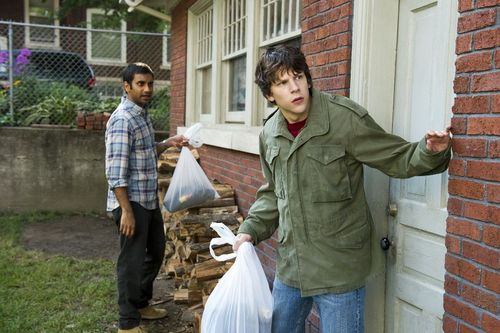 Brevity is a good friend to the mediocre comedy “30 Minutes or Less.” Running roughly 75 minutes long, the film is tidily arranged by director Rueben Fleischer, who has enough sense to hit his slapstick bullet points and bail. I just wish he had better material, at least something substantial that would prevent the picture from becoming yet another R-rated comedy cursed with crummy improvisation-addicted actors and their distracting potty mouths.

Nick (Jesse Eisenberg) is a pot-smoking slacker suffering through a pizza delivery gig, unable to motivate himself while he watches his best friend Chet (Aziz Ansari) and ladylove Katie (Dilshad Vadsaria) better their lives through professional opportunities. Nick finds himself in deep trouble when he’s cornered by Dwayne (Danny McBride) and Travis (Nick Swardson), a pair of dim-witted crooks who strap a bomb to the pizza guy’s chest, ordering him to acquire $100,000. Handed 10 hours to complete his task, Nick freaks, teaming up with Chet to find a way out of his dire predicament, eventually incurring the wrath of Chongo (Michael Pena), a bewildered gangster looking to kill both sides of the bomb dilemma.

After striking oil with his 2009 comedy “Zombieland,” Fleischer dials down the genre theatrics some for this violent laugher, a silly picture that seems more invested in miniature acts of oddity and vulgarity than any overriding sense of cinematic momentum. 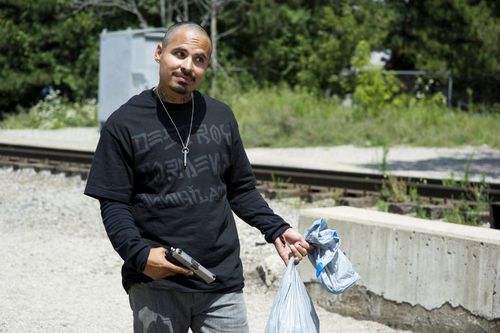 Fittingly, it takes about 30 minutes for Fleischer to warm up the picture’s engine, spending the opening act arranging these sketchy personalities, avoiding direct lines of heroism and panic to play the conflict as one big idiot convention with varying degrees of evildoing. Nick isn’t some innocent thrust into bomb-vest concern, but an unmotivated smart-ass who can’t help but be drawn to Katie, Chet’s twin sister and a woman he’s fiercely protective of. Chet’s a teacher who’s tickled by the criminal life, helping his buddy through a grueling situation while indulging a few bank robbery fantasies gleaned from repeated viewings of “Point Break.” And there’s Dwayne and Travis, two man-child brats raising money to pay Chongo to kill Dwayne’s intimidating father (Fred Ward), warming themselves with dreams of opening a tanning salon/brothel with the inheritance payout.

The characters are combustible and the bomb is quite real, yet Fleischer plays “30 Minutes or Less” slackly, strangely resisting anything overly farcical to keep cool with his actors, permitting the entire ensemble to riff extensively. Ansari nails a few chuckles as Chet grows increasingly frenzied, but McBride and Swardson are powerless here, spitting out whatever grotty thought bubbles into their mind. It’s like watching bad stand-up comedy with these two, McBride especially, who’s playing the same mulleted, dopey bravado note that’s come to define his entire career. About the time the pair comes up with the brothel verbal signal “Tanny Glover” is when Fleischer fully gives up on achieving substantial laughs. I’d hate to see the jokes he cut out. 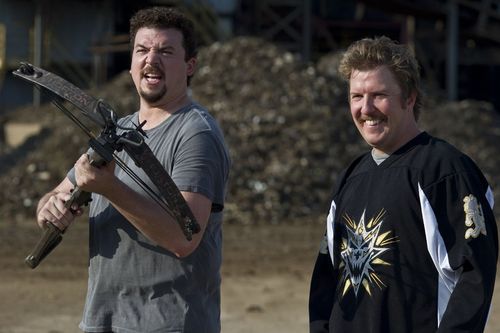 In the second act, “30 Minutes or Less” grows slightly more demented, escalating the bloodshed and desperation, which is exactly the type of cattle prod the material needs. Watching Nick speed around town getting into all sorts of trouble is far more rewarding than witnessing sluggish improvisations, and the frantic fun plays well to the director’s considerable visual gifts. Once the comedy takes a nap, the picture comes alive as an amusingly sinister creation, with a few twists and turns along the way that hold attention.

Again, “30 Minutes or Less” is a brief adventure, with its faults more annoying than damaging. However, this movie could’ve been an absolute riot with a stronger cast and secure script. 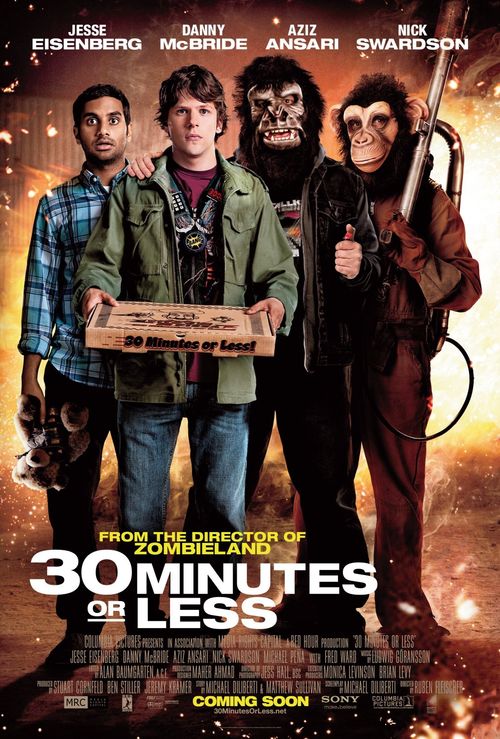