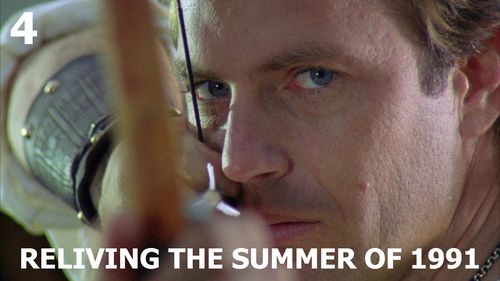 Nutshell: Robin of Locksley (Kevin Costner) has returned home from the Crusades with Moorish protector Azeem (Morgan Freeman), only to find his beloved kingdom and estranged father destroyed by the wicked Sheriff of Nottingham (Alan Rickman). Driven into Sherwood Forest, Robin stumbles upon a rogue band of warriors, including Little John (Nick Brimble) and Will Scarlet (Christian Slater), looking for a leader and a path of defense against the Sheriff’s demented reign of power. Using his outlaw status and the sheer force of his merry men, Robin quickly disrupts the Sheriff’s plans for domination, though in his haste to restore power to the rightful owners, the dashing arrow marksman puts his true love, Marian Dubois (Mary Elizabeth Mastrantonio), in the line of fire. 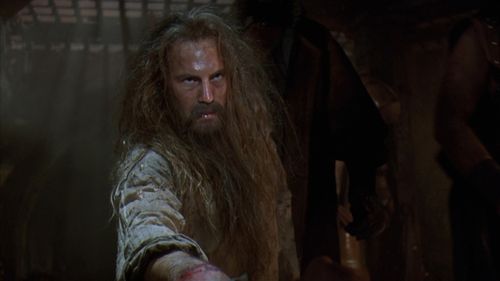 1991: When the teaser trailer for “Robin Hood: Prince of Thieves” debuted in late 1990, it floored me. Of course, it was only a minute of footage with a killer arrow POV visual effect (later placed into the film after a positive audience response), but this morsel of marketing planted a frightful moviegoing craving. I would go on to study the trailer with a Zapruder-like concentration, often excusing myself from my movie theater employee duties to watch the preview over and over. With the “Willow” score in full effect, the dialogue-free images (a sly creative decision I didn’t fully grasp until…well, yesterday) shot through my mind, promising the greatest summer thrill ride of 1991.

I suppose out of all the movies to be released that summer, “Prince of Thieves” was the one I was looking forward to the most. Still flying high on “Dances with Wolves” fumes, the idea of Costner taking on the irresistible legend of Robin Hood was nothing short of pure screen catnip. It also helped to have Slater (already established a teen screen ace) and Mastrantonio (star of “The Abyss” and “Class Action,” a guilty pleasure legal thriller from spring 1991) along for the ride. It was as if director Kevin Reynolds was making a movie just for me. I couldn’t wait for this thing to open. 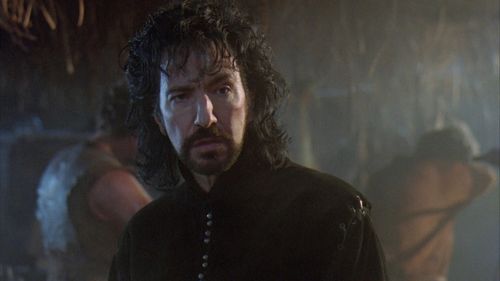 And I actually didn’t wait when the film premiered on June 14th, 1991, pulling out my trusty bike and riding over to the local movie theater, in the middle of a thunderstorm, to devour the first show of the day. Menacing weather be damned, nothing was going to keep me away from Robin’s new adventures. Drenched and ready, I settled in for the big show. My goodness, I can still recall the bustle of the matinee crowd, the tempting smell of fake butter topping in the air, and the creaky mechanical rise of the stained velvet curtain, hearing that initial discharge of Michael Kamen’s soaring score. I just knew I was in good hands. 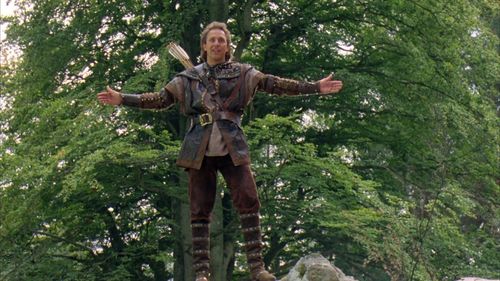 Heavens be, I adored “Prince of Thieves,” reveling in its unpolluted adventure attitude and unexpected mean streak, finding a take on Robin Hood that fit my itchy teen expectations while catering to my hidden desire for corny screen romance and hammy Brit acting. The film was shot out of a cannon, leaving me breathless and a little delirious when the end credits rolled. This being the days before internet movie snob bullying, I didn’t absorb Costner’s rickety accent at the time or fully reject the cheesy-weesy Bryan Adams theme song. It was all part of the show, and for over two hours, I was transported to a clash of good vs. evil that felt scrappy and alive, capturing the best escapist feelings of the summer movie season. Perhaps its cool factor wasn’t high, but “Prince of Thieves” was this messy, filthy, nasty ride with a bizarre sweetness about it. It was an awesome package, and a moviegoing memory I savor. 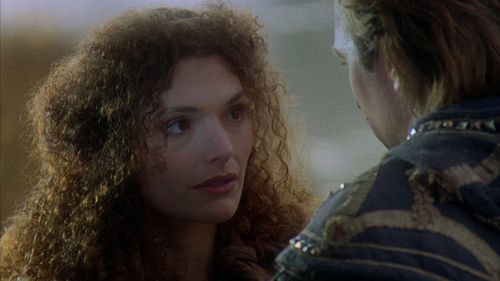 2011: As I’ve matured, I’ve examined plenty of vitriol about “Prince of Thieves,” most centered on Costner, who was at the top of his box office power when the picture was initially released, catapulting him to even greater fame. I get the accent argument, with the actor rudely dropping any attempt at an English tongue halfway through filming, leaving Robin’s vocal command erratic -- a humiliating fact Costner himself accepts responsibility for on the film’s commentary track. Regardless of accent woes, Costner makes a fine impression as Robin Hood, infusing the role with sincerity and dimness of heroism that helps to understand the recklessness of the character. Let’s make this perfectly clear: I have no problem with Costner as an actor. Though he’s made some awful pictures and revealed a repellent ego at times, he’s a uniquely American thespian who’s taken chances and courageously played beyond his skill level. Hate the accent all you want, but Costner’s take on Robin Hood’s tenacity is quite appealing, playing into a group effort that keeps the ensemble cooking.

I could go on and on about Costner and his unfair reputation, but we’re here for “Prince of Thieves.” A movie I’m still perfectly delighted with two decades later. 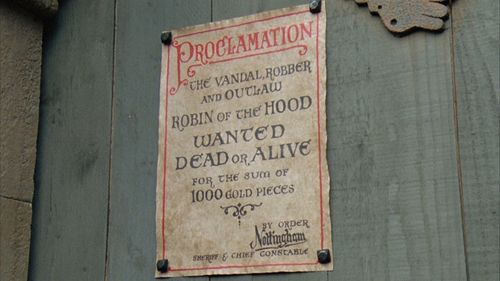 Though our friends at Warner Home Video have only issued the Extended Cut of the feature on DVD and Blu-ray in recent years, the fattening of the film (a.k.a. the notorious early version of the movie) doesn’t detract from its blockbuster eruption. It’s a messy, brash motion picture, with plenty of logic and characterization gaps, but it moves so spectacularly, even after all these years. Reynolds employs a fluid shooting style for the picture, swinging around Steadicams and snatching extreme close-ups to capture Robin’s rough ride, while keeping the exteriors of the film fittingly grimy and gloomy, to reflect the brutally moist and gusty English locations. Punted out the window is any leftover Technicolor glow from the 1938 Errol Flynn picture, with Reynolds more content to make mud pies and fling spit, endeavoring to detail period doom, a realism that dials down the swashbuckling to more feral acts of survival. Though more than happy to indulge a few moments of high-flying screen acrobatics, “Prince of Thieves” delights in the muck -- a divine aesthetic that quickens the pace and, hopefully for younger viewers, encourages plenty of backyard recreation. 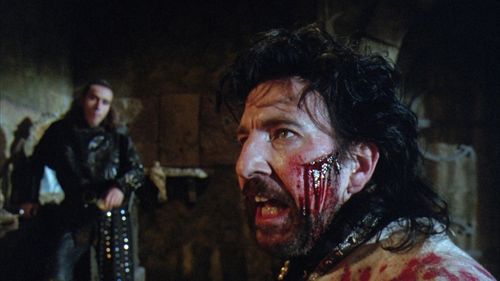 The bruised beauty of the film is a major selling point, taking the story into streams, forests, and dilapidated castles. Tune the performances out, and there’s an intense visual identity to devour, with Robin Hood returned to his grungy way of life, while the Sheriff stomps around evil lairs -- grim houses of torture and death, which leads to a black magic subplot with Mortianna the witch (Geraldine McEwan) the Extended Cut explores in greater detail. “Prince of Thieves” is surprisingly bleak, a quality that enraged some parents back in 1991, with much of the violence remaining quite potent in 2011, with stabbings, C-sections (Akeem knows plenty about birthin’ babies), and dismemberments keeping the picture reasonably raw. It’s a PG-13 experience in the best sense, submitting a wicked spin on “Hood” essentials while somehow retaining a jovial atmosphere of outlaw festivity, along with a few potent dabs of romance, though much of the picture’s warmth can be directly attributed to Mastrantonio and her masterful ability to commit to anything asked of her. Kamen’s killer score (a rare slam-dunk for the late composer) gets the assist. 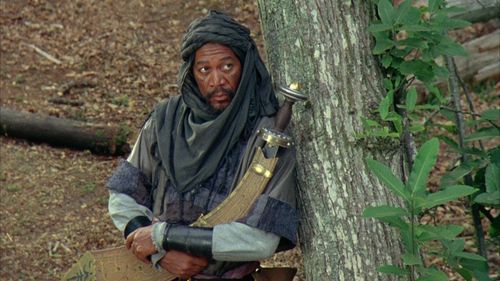 Also of note here is Robin’s sworn protector, Akeem, gracefully played by a surprisingly buff Morgan Freeman. Positioned as a sidekick character, Akeem is perhaps the bravest merry men of the bunch, while wearing his Islamic beliefs quite proudly. That’s right, “Prince of Thieves” has a heroic Islamic character. Trying finding that on the screen these days.

While Costner’s boyish enthusiasm and scruffy Rod Stewart hair sells much of “Prince of Thieves,” there wouldn’t be much of a picture without Rickman’s Sheriff of Nottingham. A mere three years past his career-defining role in “Die Hard,” Rickman suits up for another villain gig, though it looks as though Reynolds’s direction  of the actor consisted of vague head nods and an occasional “Yeah, whatever you want, Alan.” It’s a Texas-broad take on wickedness, beefed up in the Extended Cut, permitting the actor to chew scenery like a ravenous dog, though it fits shockingly well with the rest of the anarchy on display. Rickman is a raven-haired tornado, seething and growling his way to the end of the film, where he finally receives an opportunity to get in on the sweet sword-swinging action. Lordy, he’s fun to watch, if only because the unchained performance is a potent reminder of the movie’s troubled shoot. Rickman’s on his own here, but it’s a massively enjoyable interpretation of evildoing, creating genuine interest in the script’s sinister business. Or maybe I just wanted to see how far Rickman could run before Reynolds vetoed his impulses. Turns out, pretty darn far. 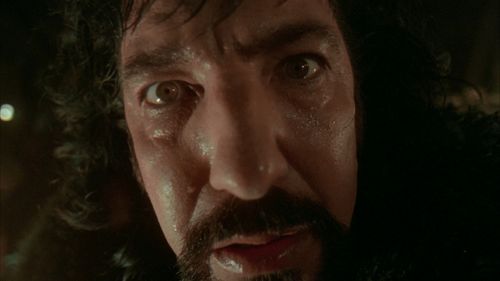 “Prince of Thieves” creates an evocative sense of the Robin Hood legend, and it’s such an easy movie to plop down and watch. While a story told repeatedly (including Ridley Scott’s version from last year), the 1991 film takes the dog-eared premise down a few dark alleys, plays things charmingly claustrophobic, and maintains a winningly low-to-the-ground attitude. Time has labeled the feature as damaged goods, but to me, it’s as thrilling now as it was then. It’s a disorderly ride, but a splendidly captivating adventure. With or without an English accent. 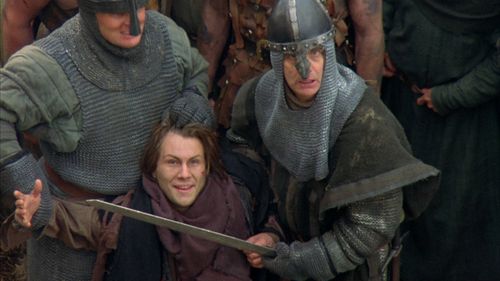 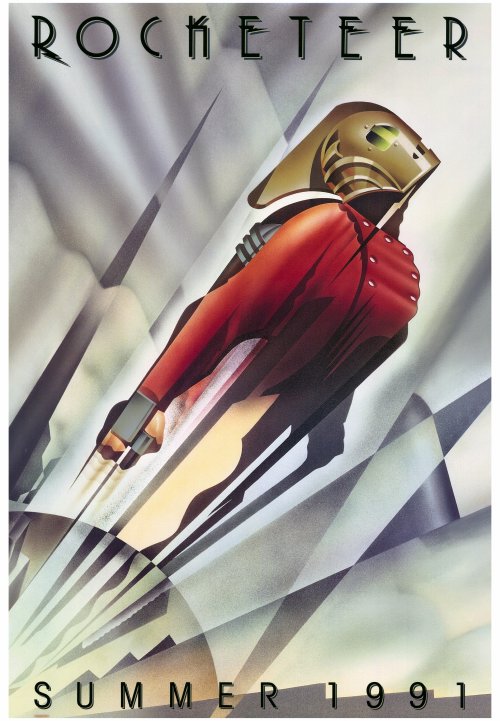 And Julia Roberts makes some frowns with pal Joel Schumacher. 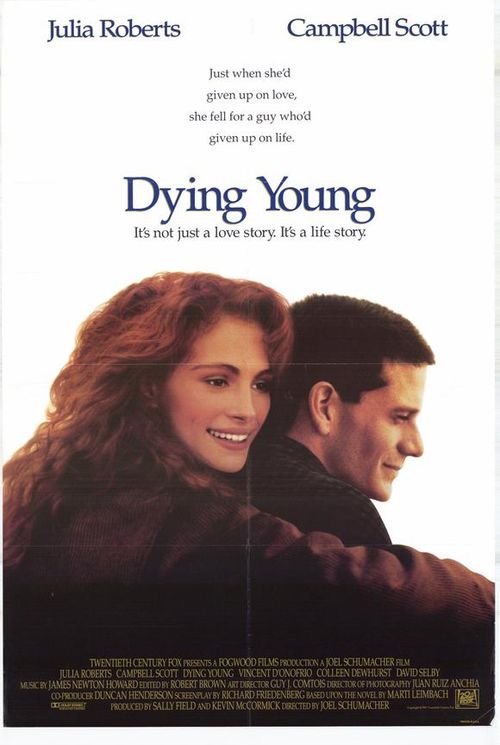 You may appreciate this blog posting about Kevin Costner's Robin Hood: Prince Of Thieves accent:
http://woozerkristen.tumblr.com/post/1272696685/why-costners-crappy-british-accent-is-a-moot-point

I LOVE this movie since the first time I saw it, receiving it from Columbia House because I didn't decline it in time so I had to buy it but was so glad I did!!