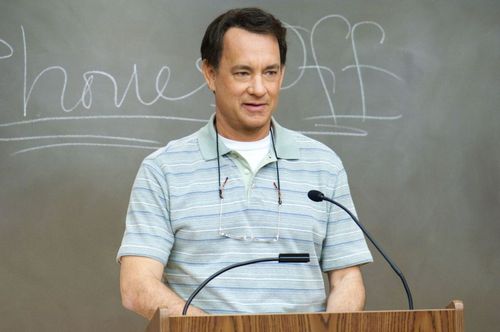 “Larry Crowne” is a breath of fresh air in a summer moviegoing season polluted with superheroes, family film fart jokes, and battling robots. Serving as its co-writer/director/star, Tom Hanks presents a portrait of betterment, taking on cynicism with a motion picture that revels in its mild-mannered corniness, making a friendly feature that’s amusing, approachable, and largely unexpected, keeping formula distracted with a special directorial spin Hanks hasn’t displayed since his marvelous 1996 effort, “That Thing You Do!”

An eager employee at a big-box store, Larry Crowne (Tom Hanks) has been fired from his job due to a lack of a college education. Devastated, Crowne looks to overhaul his life, purchasing a scooter to save on gas money and enrolling at a local community college, taking a speech course taught by Mercedes (Julia Roberts), a disgruntled professor dealing with marital problems. Taking to the workload of education, Larry begins to flourish in school, while developing an unexpected friendship with Talia (Gugu Mbatha-Raw), a spunky young woman who challenges her older pal with fashion tips and feng shui. As the semester passes, Larry regains control over his life, while coming into Mercedes’s view as someone special in a student body teeming with distracted slackers.

“Larry Crowne” is a vaguely accelerated take on the nation’s current economic woes, observing a man facing his middle age without a job, unable to pay his mortgage or make a proper impression on potential employers. However, Hanks doesn’t wallow in the gloom, instead manufacturing (with co-writer Nia Vardalos) a movie that celebrates a proactive attitude, making Larry a man of action, not fear. 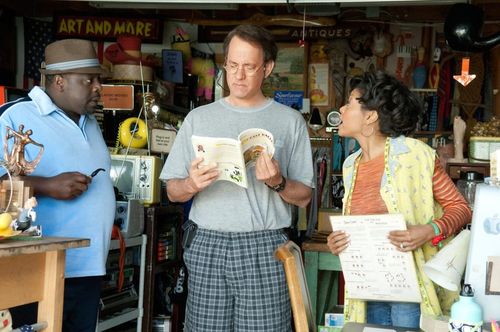 This is a feature of small surprises, arranged by Hanks in a buoyant manner that seeks a sunnier disposition when approaching acts of personal repair. “Larry Crowne” is founded in familiarity, yet Hanks works diligently to swat away predictability, making an eccentric, moderately cutesy movie that gets away with murder due to its pureness of spirit. It’s not a film for cynics, but a creation of shining optimism. Hanks has made a picture about people helping other people, and he pulls it off with a few big laughs and some startling restraint.

What makes the feature so appealing is its attitude toward education and campus community interaction, depicting Larry as a hard worker who looks to absorb as much as his teachers will share (George Takei steals a few scenes as an economics professor), while falling into Talia’s supportive group of scooter enthusiasts -- a passive bike gang that accepts the older man, helping him find style beyond harsh hair parts and tucked-in polo shirts. It’s a subplot of encouragement that disarms, ignoring standard displays of generational conflict to keep steady on Larry’s odd influence and acceptance of help. Also engaging is the treatment of minimum-wage jobs, highlighting Larry’s indefatigable pride in his work, happy to be making a difference. It’s a minor beat of sincerity that goes a long way. 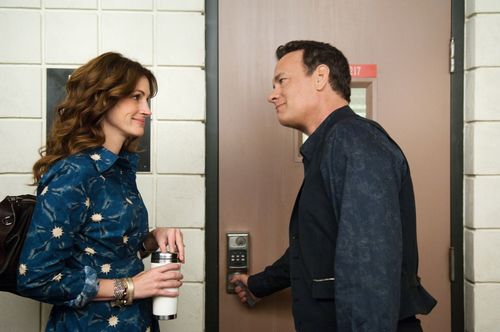 Hanks generally avoids obvious dramatic routes, keeping the movie fresh by refusing indulgence. Larry and Mercedes aren’t glued to a path of romance, instead solidifying their eventual union with subtle acts of vulnerability. Larry and Talia’s friendship never morphs into something salacious, with the two opposites staying friendly and supportive. “Larry Crowne” has all the opportunity in the world to chase predictable conflicts and hit melodramatic pit stops, yet Hanks keeps the material on course. The only major hiccup encountered is found with Mercedes’s porn-addicted husband (Bryan Cranston), who’s here to motivate the professor into Larry’s arms. The subplot is uncharacteristically oppressive, clumsily handled, and excruciatingly performed, fitting the material for an anchor it doesn’t need.

“Larry Crowne” is wobbly at times, but triumphant overall, providing a cool breeze of adult entertainment that’s interested in human dynamics. It’s earnest and utterly charming, handed spark and pace by Hanks. It’s a treat to have him directing movies again. 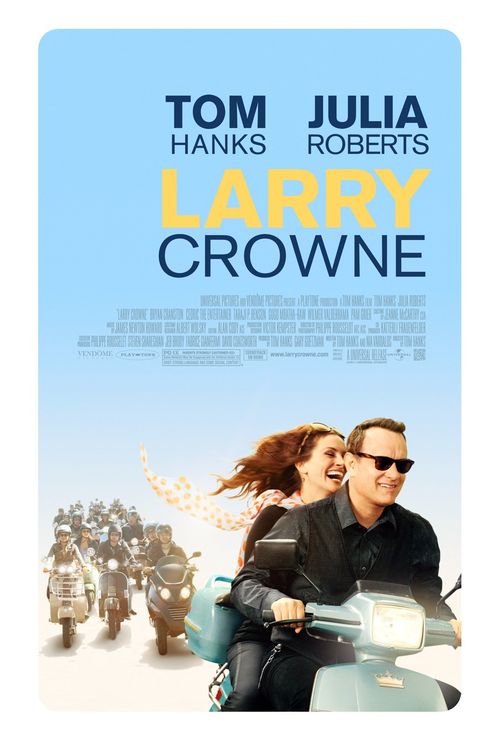