Cameron Diaz isn’t funny. Sure, with the right script, she finds a certain zestful comedic appeal, but “Bad Teacher” most certainly does not possess a right script. It has a wrong script, demanding Diaz carry most of the jokes on her shoulders, forcing her to sell the stuffing out of a lazy, unimaginative idea. She’s not built for the challenge. Perhaps this is why she wears ridiculously tight clothing and the highest of heels throughout the picture. Sex appeal: it’s a lot easier than dreaming up clever jokes.

Dumped by her sugar daddy, Elizabeth (Cameron Diaz) is forced to return to teaching, where she spends her work hours hung over, high, and asleep, keeping her students busy with movies. Her rival is Amy Squirrel (Lucy Punch), a strident overachiever who can’t stand Elizabeth’s slutty demeanor, looking for any possible way to torch her career. Desiring breast implants to land a husband, Elizabeth realizes she needs to scrape up a sizable amount of cash quickly, leading her to several schemes, including an elaborate effort to rig a state exam. Also in her sights is Scott (Justin Timberlake), a wealthy teacher with a nauseatingly positive attitude, while gym teacher Russell (Jason Segel) watches from the sidelines, hoping to charm Elizabeth with his sarcastic, stoner ways. 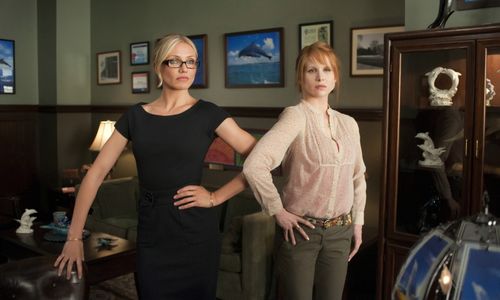 “Bad Teacher” comes from the screenwriting team that gave the world “Year One,” which should probably conclude the review right here. Gene Stupnitsky and Lee Eisenberg have created a series of vignettes with “Bad Teacher,” focused on the rapscallion ways of Elizabeth and her quest to acquire enormous breasts. She’s a liar, thief, stoner, and alcoholic, and the very fact that she’s in charge of children is the central gag of the motion picture -- a mirror image of Billy Bob Thornton’s work in “Bad Santa.” Coming up with a story is too much of a challenge for the writers, who merely stick their herpetic heroine in arbitrary events, using her rivalry with Squirrel as the glue that keeps the script together. “Bad Teacher” is a loose series of gags, with every stop on this sad adventure content to beat the same three jokes into a meaty paste, trusting Diaz’s appearance will keep eyes on the screen while the film’s winded sense of humor is swiftly choked out, never to recover.

It’s apparent within the first five minutes of the film that “Bad Teacher” is going nowhere. Watching Diaz labor to make with the funny is a painful thing to behold, but for the feature to rely so intensely on her instincts is a special torture. She’s just not a comedian. Diaz needs superb writing to help her achieve great performances, not an excruciatingly one-note carousel of insults and cursing, frantic to mass-produce irreverence. Punch is equally as abrasive, taking every chance to broadly articulate her role as the Midwestern spoiler, a chirpy monster hiding behind faux pleasantries and academic achievement. The performances are shrill and meandering, displaying agonizing self-reliance through dreadful bouts of improvisation. The pain extends to Timberlake (here strictly for marquee value) and Segel, who pops up every 15 minutes to remind audiences that he needs a new agent. Phyllis Smith baffles as well, believing a performance consisting solely of soft groaning is the key to bellylaughs. She’s mistaken. 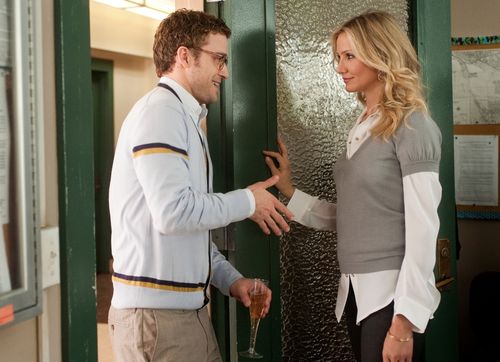 The director is Jake Kasdan, who’s done comedy wonderfully before (“Zero Effect,” “Walk Hard”), yet he completely wipes out here. “Bad Teacher” is clunky and insipid, wasting an opportunity for wicked mischief on juvenile antics involving drugs, drink, and dry humping, while remaining far too permissive with its actors. Kasdan shows no interest in structure, staging shock value to electrify his comatose movie. The filmmaker shoos away ingenuity to make crass jokes we’ve all seen before, sold in such a lethargic manner, it’s quite possible much of this rancid feature was captured while Kasdan was napping. “Bad Teacher” just couldn’t be the work of a rested, invested director. That would be madness.

“Bad Teacher” crawls to a conclusion, somehow expecting the viewer to side with Elizabeth and her charmless, reprehensible behavior, if only to see someone more unhinged punished. There’s a late inning warm-up to exit these characters on a note of endearment -- an utterly spineless development. Elizabeth shouldn’t be liked, she should be feared, but that’s a display of tonal bravery that would never see the light of day with these screenwriters. Instead, the climax is a pedestrian run of redemption, concluding a perfectly humorless comedy on a cowardly note. 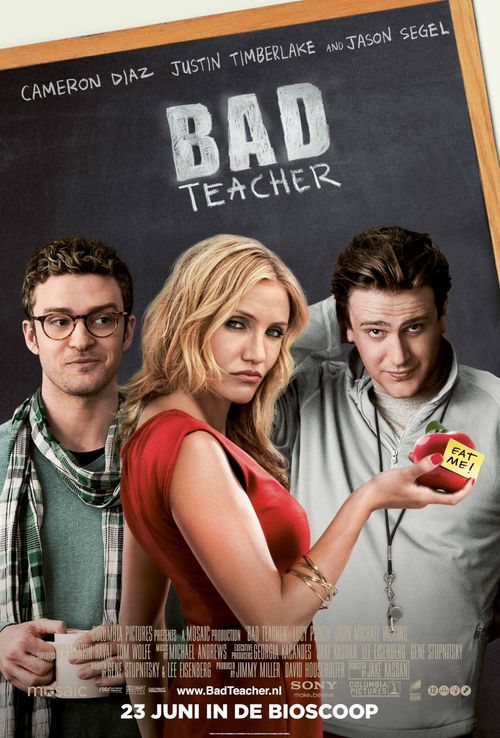