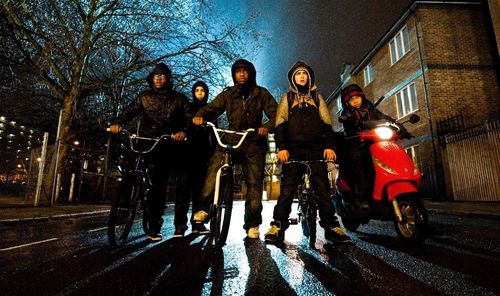 Mounting a proper antihero extravaganza takes a special directorial hand, someone able to make a friend out of a nasty human being and make it stick as an organic exploration of an intricate personality. “Attack the Block” looks to build an entire motion picture around the antics of rotten people, and first-time filmmaker Joe Cornish doesn’t possess a magic touch able to smoothly transition creeps into champions. A slick horror comedy, “Attack the Block” contains a few fatal flaws that weaken its sense of cheery violent fun. It’s difficult to root for a bunch of alien-busting kids when they all deserve prolonged spankings.

As the leader of a scrappy street gang, young Moses (John Boyega) looks to rule the council estate he calls home, running with a pack of like-minded teens hopped up on American rap music and daydreams of violence. After terrorizing neighbor Sam (Jodie Whittaker) late one night, Moses and the boys encounter an alien life form that’s crash-landed in the street. Killing the beast and returning to the local drug kingpin, the boys pack away the grotesque corpse, looking to cash in on their discovery in the morning. However, the sky unleashes more visitors during the night, forcing the teen toughies to arm themselves and protect their building as growling, dark creatures come to feast. 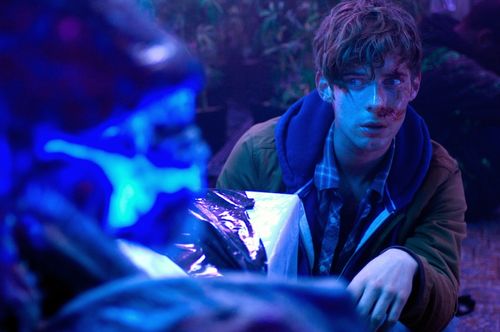 A meticulously English production (the South London slang is thick as fog), “Attack the Block” heads to the hoodie generation to fashion a fresh sense of fearlessness. Moses and the boys are a rough crew of pubescent loners raising themselves in a troubling area teeming with crime and gangster idolatry, hoping to make their mark by menacing the locals, stealing valuables and threatening their victims with knives. In fact, a majority of the characters are repellent human beings, save for Sam and an educated stoner (Luke Treadaway) caught up in the ambush, with much of the film devoted to celebrating the warrior spirit of these smug, soulless kids, who turn their numerous weapons and ballsy attitudes towards the invaders, thus somehow erasing their previous sins.

Cornish has only a tentative grasp on geography, presenting action inside the council estate that lacks a solidified sense of space and character, with the gang running from one nondescript area to another, losing momentum as the film unfolds. Cornish’s screenplay is also terribly clunky with exposition, careful to underline important information that will come into play later in the film. Subtlety is not the man’s strong suit. The filmmaker achieves a darker version of “The Goonies” here, with the kids hopping on bikes for transportation, while using their underage, thinly ‘stached moxie to outwit adults and aliens, spitting out smartass comments along the way. Cornish embraces the antisocial thuggery as a unique thumbprint to his familiar tale of vicious outer space trespassers, but a key element of personality is sorely lacking from the picture, something enticing that turns these streetwise ghouls into palatable ruffians. I spent the movie rooting for the aliens, and that’s not the reaction Cornish is reaching for.

There’s some last-minute vulnerability thrown into the script as a way of justifying awful behavior. It seems the little rascals are merely the byproduct of their troubled surroundings, absorbing rage and neglect from the previous generation. It’s a hasty backtrack to warm up Moses and the boys, removing true responsibility for earlier actions to help reinforce their bruised courage, with Cornish ladling on transparent commentary concerning the state of the teen union. “Attack the Block” just isn’t substantial enough to support a sincere excavation of urban influence and misguided social unity. 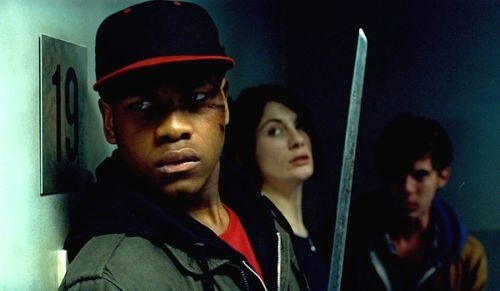 Despite a largely unlikable cast of characters, the technical efforts in “Attack the Block” are magnificent, extending to the design and execution of the aliens. These pure-black creatures with glowing teeth (resembling one of the threats from the 1991 video game, “Out of this World”) are interesting to study and provide a few genuine moments of suspense, rampaging all over the building with a swell mix of CGI and practical effects.

“Attack the Block” bleeds geek and features enough splashy chase sequences to keep the patient involved, but these surface details are unable to support the entire picture. Cornish gradually inches away from a complex dissection of valor, leaving the end an irresponsible call to glory for the main character. I’m all for flawed heroes and sophisticated depictions of bravery, but to make a widescreen king out of a violent offender feels wrong, squeezing the fun factor out of a movie that yearns to please. In regards to your complaint on the fact that the characters in the movie aren’t exactly heroes. No they’re not. The main group of kids are dicks who begin the movie by robbing a young woman on her way home from work. But that’s part of what makes the movie the real deal. Attack the Block never tries to arbitrarily convince you that they’re actually great people. It does not shy away from who these kids are. In fact, it engages their nature frequently, and ends up describing a set of characters with believable, sometimes contradictory characteristics. Getting an audience to root for them is a huge challenge, and I think Joe Cornish manages it with skill. The jokes are funny, the setpieces work and the creatures are cool, but it is that character trick that really impressed me.