For the first hour, the southern drama “Bloodworth” captures a perfectly compelling tone of discovery, approaching solemn incidents of domestic disturbance with a countrified stillness. Criminally, the final 30 minutes erase most positive feelings about the feature, with concentration lost to the demands of a complicated literary translation. It’s an interesting picture, teeming with inspired performances and intriguing developments, but it’s a viewing experience best left unfinished.

Returning to rural Tennessee after 40 years of life on the road as a singer, E.F. Bloodworth (Kris Kristofferson) is preparing to die, hoping to socialize with the family he left behind. Sons Warren (Val Kilmer), Brady (W. Earl Brown), and Boyd (Dwight Yoakam) are irate, cautiously interacting with their estranged father. However, young Fleming (Reece Thompson) is interested in his grandfather’s stories, establishing a modest bond while his own life is thrown into turmoil, with the boy looking to romance Raven (Hilary Duff), the daughter of a local prostitute Warren favors, and deal with his GED requirements, helping him to achieve his dreams of being a writer.

Adapted from the William Gay novel “Provinces of Night,” “Bloodworth” is gifted a healthy Southern Gothic makeover, taking viewers into the backwoods of Tennessee to watch a secretive family unravel at the very moment of their long-awaited reunion. Screenwriter/star Brown appears to enjoy the challenge of characterization, working the family dynamic with vigor in the early moments, arranging the temperaments and detachment of the Bloodworth clan, while issuing chewy dialogue to hungry actors, a group that offers a satisfying assortment of accents and, in the case of Kilmer, flamboyance. The picture opens with confidence, erecting a curious discomfort around the arrival of E.F., who stirs up trouble wherever he goes, even as he prepares for the end of his life.

The performances are commendable, and I especially enjoyed Brown’s efforts to keep Fleming a calm young character, making it easy to comprehend his motivation, while his moments of courtship with Raven provide some virginal vulnerability. The foundation of the film is poured with confidence, handed country music serenity with an active soundtrack, peppered with acoustic songs from Kristofferson. “Bloodworth” is modest and obvious, but engaging in these initial moments, setting up a series of conflicts and resolutions that Brown and director Shane Dax Taylor seem perfectly capable of handling.

Unfortunately, “Bloodworth” takes a severe left turn in the third act, with enormous sections of storytelling removed to hit the climax faster. Every character is weakened by the chop, but Fleming’s arc is positively ruined by the abrupt arrival of fate. The picture suddenly loses balance, burning through confrontations in a disorienting manner, wrecking the gradual burn of resentment that was so appealing in the early going. It’s a sloppy editorial job, nearly sullying the entire picture in the process. I’d rather have a three-hour picture of languid substance than a 90-minute hustle of events, a few, including incidents with Boyd, that offer no meaning beyond visceral acts of violence.

The anamorphic widescreen image (2.35:1 aspect ratio) presentation has some trouble with EE issues and a generally soft look. Colors are available, but never quite solidified, with minimal bleeding. Skintones fare better, revealing natural life and emotion, while black levels are muddy, clouding key encounters at night.

The 5.1 Dolby Digital sound mix stays on task for much of the listening experience, sharing a peaceful mood of country life, with healthy atmospherics creating a compelling environmental feeling. Music also plays a central role, sounding healthy and full, with the intimate numbers revealing a true sense of stillness. Dialogue is thin, but understandable, with accents in order, while conflicts remain frontal. French, Spanish, and Portuguese tracks are also included.

The feature-length audio commentary with director Shane Dax Taylor and writer/actor W. Earl Brown is extraordinarily informative, hungrily dissecting the picture, exposing the challenges of adaption and low-budget execution. Brown dominates the conversation, beautifully exploring his efforts to retain thematic life in his script, illuminating his creative choices, while Taylor supports the best he can, describing musical placement and visual cues. The men hit a few play-by-play beats, but the chat stays on target, helping to understand how the film came to be.

“Deleted & Alternate Scenes” (31:49) provide the meat of the story, offering a closer look at the lives of the brothers and E.F.’s early time in town. A great deal of character development is located here, material that should’ve remained in the final film.

“From Page to the Screen” (16:38) is a making-of featurette, using a low-tech approach of interviews and BTS footage to convey the filming experience. It’s thoroughly educational and direct, accurately capturing life on the set.

“Anatomy of a Song” (7:28) explores the creation of the tune “You Don’t Tell Me What To Do,” written and performed by Kris Kristofferson, with help from producer T. Bone Burnett.

It’s absurd to ask potential viewers to shut off the feature at the hour mark, yet I can only imagine how improved the picture will be without the abrupt conclusion tainting the experience. “Bloodworth” has value, but there’s a harsh price to be paid for the dramatic investment. I’d rather recommend a crudely shortened version of the film than no film at all. 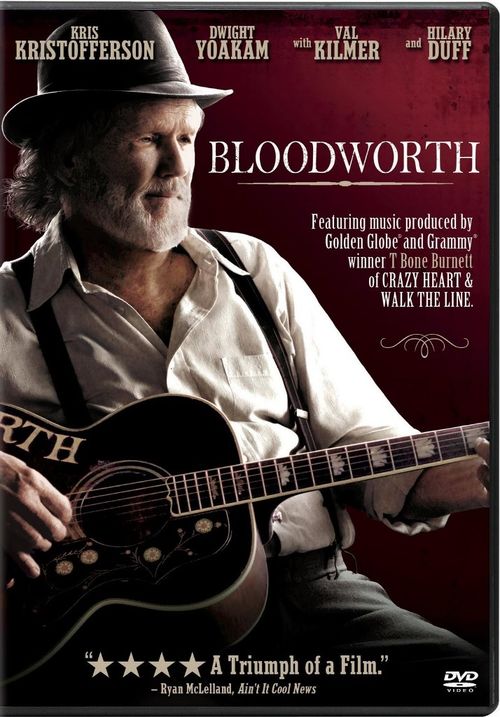