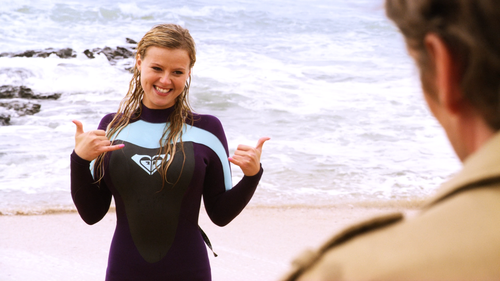 Has it really been nearly a decade since “Blue Crush” paddled into theaters? The 2002 film was a modest success, but quickly established an awkward place as a feminist anthem, drinking up the gorgeous beaches and waves of Hawaii. Never mind the fact that director John Stockwell invested more in leering than liberation, the reputation stuck. An eternity later, Universal has revived the “Blue Crush” corpse with a DTV sequel, ditching Hawaii for the budget landscape of South Africa, while losing the original’s lascivious behavior to tinker with Disney Channel dramatics and candied characterization.

Frustrated with her privileged life in California, Dana (Sasha Jackson) has decided to run away to South Africa to find her late mother’s spirit on the waves, embarking on a surfing trip to a foreign land. There she meets Pushy (Elizabeth Mathis), a like-minded surfing soul who offers the brash blonde a place to stay when her belongings are stolen. Greeted by a community of surfers and beach bums, Dana finds love with singer/animal sanctuary volunteer Tim (Ben Milliken), rubs rival Tara (Sharni Vinson) the wrong way, and is targeted as an object of lust by smoothie shop owner Grant (Chris Fisher). With her water skills tested and her heart aching, Dana finds the trip refreshing her soul, while her nosy behavior uncovers a few ugly secrets held by the locals. 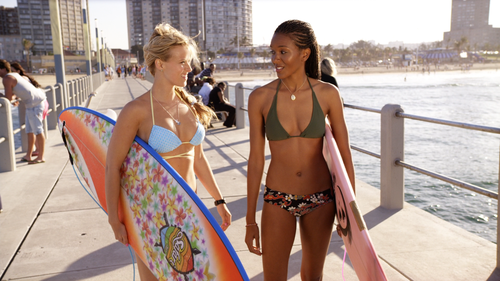 I wouldn’t suggest that “Blue Crush” was a particularly gritty motion picture, but it’s practically a Sidney Lumet film compared to this plastic sequel. Director Mike Elliot (“Beethoven’s Big Break”) and screenwriter Randall McCormick (“The Scorpion King: Rise of a Warrior”) dial down the sexuality and struggle of burgeoning maturity here, instead taking a scenic route of mild adventuring, following Dana as she’s thrust into an alien land on the hunt for her heart, making friends and enemies as she works out her grief on the waves. Well, sometimes on the waves.

“Blue Crush 2” doesn’t actually feature an overwhelming amount of surfing footage, preferring to stick with painful melodramatic detours involving Tara’s disapproval, Pushy’s surfing fears, and Dana’s father, who’s come to South Africa to find his wayward daughter. Did I mention the subplot involving elephant poaching? Because that’s story every surfing feature needs to cover. “Blue Crush 2” is packed with plot, unnecessarily padding the run time to resemble a full cinematic meal. Simplicity is lost, along with any entertainment value, as Elliot labors over moronic conflicts while supplying disappointingly routine surfing footage. South Africa is a beautiful land, yet “Blue Crush 2” would rather spend time on drably scripted clichés than dig into a thrilling outdoor quest. 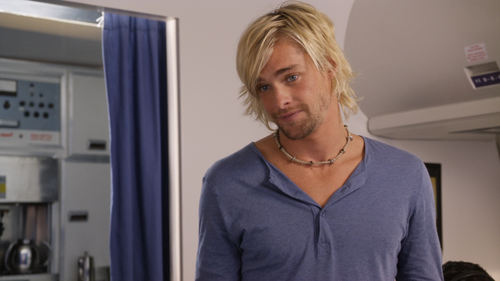 Also not helping the cause are the performances, which play either too earnest or too obnoxious. Lead Jackson is a particular sore spot, portraying Dana as an ugly American, happily stomping all over South Africa without much care for native traditions. Jackson is shrill and her accent is unconvincing, which doesn’t do the film’s struggle to snatch a durable emotional arc any favors. 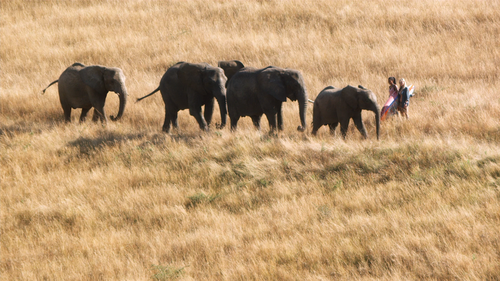 The VC-1 encoded image (1.78:1 aspect ratio) presentation carries a standard DTV look, with a generous push of colors to help sell the exotic locations and tan bodies. Crystal waters and sandy browns are well taken care of, making the feature’s exteriors quite inviting in their sun-kissed glory. Skintones are accurate, reading differences in tanning habits. Shadow detail is soft, but rarely unsatisfactory, supporting evening excursions and costume textures nicely. The elements are cared for here, but like most low-budget features, a certain cinematic crispness is missing, with the film’s summer haze diluting a pinch of the HD experience.

The 5.1 DTS-HD sound mix works an expected routine of verbal exchanges and beach atmospherics, though it lacks a special heft that creates a truly evocative listening experience. Keeping the voices frontal, exposition is cleanly explored, with group dynamics pushed into the surrounds, but only faintly. Crashing waves are suitably pressurized, elevating the track with a hearty read of water movement and stressed reactions. Low-end is light, but feels out the action here and there. Scoring is mild, while soundtrack cuts are aggressive, blasting away to encourage a celebratory feeling. No surprises here, but the essentials are represented. Spanish and French tracks are included. 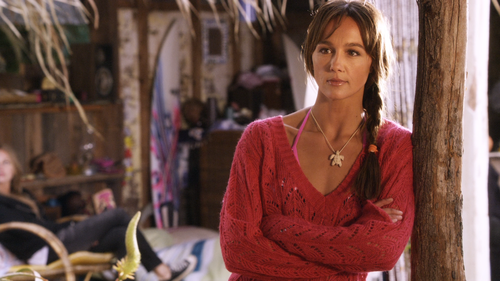 The feature-length audio commentary with director Mike Elliot, associate producer Greg Holstein, and stars Sasha Jackson, Elizabeth Mathis, and Roger Halston is about as thrilling as it sounds. Lots of giggles from the cast (who reveal their natural accents) and a game attempt from Elliot to keep on task, primarily discussing thespian choices and the challenges of shooting in South Africa. A few backstage stories amuse and enlighten (lots of water and surf training), but the majority of the chat lurches along, falling into a few play-by-play stretches.

“Deleted Scenes” (35:00) are pretty unremarkable unfinished moments removed from the film for time purposes, displaying more of Dana’s adoptive beach family, her interactions with the locals, and a few minutes focusing on the smelly nuances of balloons filled with urine. Great. They can be viewed with or without an introduction from Mike Elliot.

“Gag Reel” (2:59) is more cast and crew clowning than mix-em-ups, though there’s no shortage of wackiness either way.

“The Hunt for Waves” (7:42) is an extended montage of beach and surfing footage.

“Making Of” (12:24) is a routine collection of cast and crew interviews and BTS footage, with the featurette emphasizing the natural beauty of the land and the camaraderie of the cast. The stories shared are rehearsed but amusing, though this is far from a determined investigation of the filmmaking effort.

“Surf Safari!” (6:19) returns to the splendor of South Africa (didn’t we just cover this?), this time communicating the adventures enjoyed while the production moved around the area.

“Ripping It!” (6:51) investigates the surfing achievements in the film, focusing on footage captured during the wintertime, leading to a very chilly cast. It’s a more technical featurette, which is a nice change of pace, articulating the planning required to shoot the waves.

“Roxy” (2:34) is a lousy commercial for a swimwear line, dressed up as a music video to lure unsuspecting viewers in. 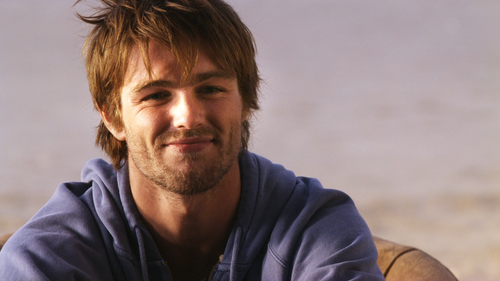 “Blue Crush 2” relies on pretty people and golden locations to appeal, but take those elements away and what’s left is a shallow, protracted run of banality. Considering the rotten quality of the original film, it seems all the sequel had to do was show up and surf. Instead, we get elephant poaching and endless looks of pinched bewilderment from Jackson. I’ve never missed John Stockwell more. 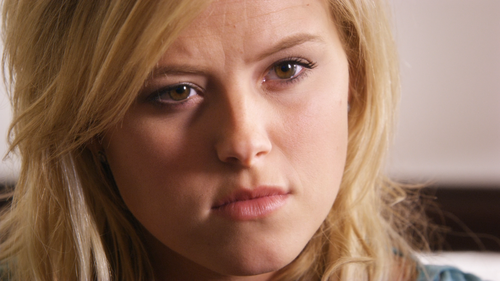 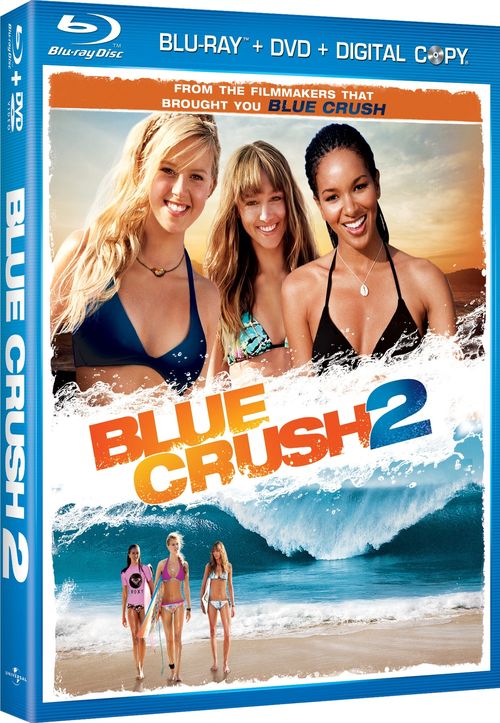