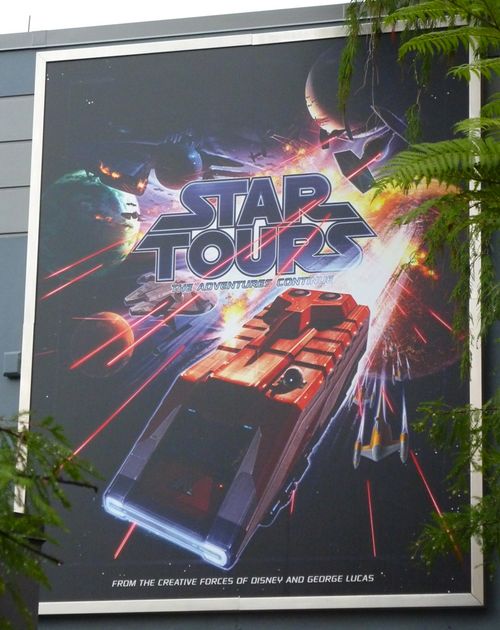 A long time ago in a galaxy far, far away there was a motion simulator attraction titled “Star Tours,” born from the imagination of George Lucas and his iconic “Star Wars” franchise. For over two decades, the entertainment experience remained unchanged at Disneyland and Walt Disney World, leaving fans to wonder if the semi-dated attraction would ever see a significant overhaul. After all, being an unabashed tinkerer, why would Lucas leave one of the more vividly imagined forays into his ATM-like empire unmolested? Would “Star Tours” remain the same forever? I mean, honestly, how many times can a person do the trench run before a case of the sleeps sets in?

It took time, perhaps some serious negotiations, and an A-Team collection of Imagineers and ILM’s finest, but “Star Tours” has finally been reworked to fit the tastes of the modern theme park fanatic. “Star Tours: The Adventures Continue” is a slick, striking 2.0 event that takes the basic elements of the original ride system and dips it all in a bubbling vat of awesome -- it’s a gorgeous update that reworks and invents to a stunning degree, creating a comfort through familiarity before taking riders on a Christmas morning blast across the “Star Wars” universe, which is a far more expansive, creature-slapped place than it was when “Star Tours” opened at Disneyland in 1987 or at the Disney-MGM Studios in 1989. 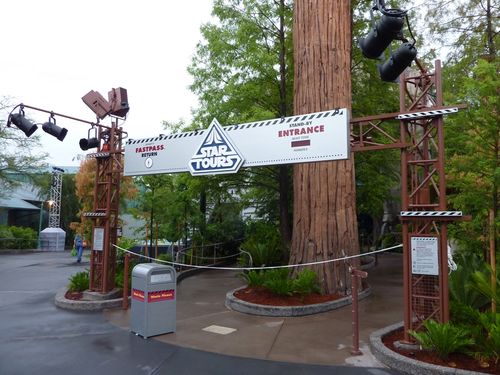 NOTE: I visited “The Adventures Continue” during a “soft open” period, which basically means Disney wasn’t allowing cameras inside the queue or ride. The company even staffed the wait line to prevent unwelcome snaps from occurring. While these minimum-wage heroes weren’t exactly ex-Mossad agents, they did a fine job surveying the crowds, shutting down or shaming photographers to the best of their ability. The pictures I did manage to get aren’t the best quality, so please forgive these stanky images. I’ll make an effort to update when the attraction opens to the public.

If you recall the original “Star Tours,” it was a standard routine of “everything goes wrong” ride theatrics, where guests boarded the StarSpeeder 3000 for a seemingly painless hyperspeed trip to the planet Endor, piloted by the nervous droid, Rex (voiced by Paul Reubens). The speeder blasted through ice, found itself caught in the tractor beam of a Star Destroyer, and made the legendary Death Star trench run before returning to safety, narrowly avoiding a fuel truck catastrophe before setting down for good. For 1987, the attraction was a stellar example of motion simulator capability and sci-fi imagination, gamely merging bumpy ride functions with zoomy “Star Wars” particulars and adventures, giving fans a chance to relive sections of the movie in the most realistic way possible.

For “The Adventures Continue,” the experience has been sweetened, not radically changed. I smell the pungent air of stressed development budgets here, but instead of demolishing “Star Tours” and rebuilding an entirely new ride system and queue area, the basics of the show building remain the same. For some, this revelation will cause great disappointment, with many fans certainly hoping Lucas and Co. would start from scratch and shape a new “Star Tours” atmosphere. Instead of a colossal overhaul, “The Adventures Continue” is a resourceful update, altering a few key elements to make the journey feel fresh and exciting. 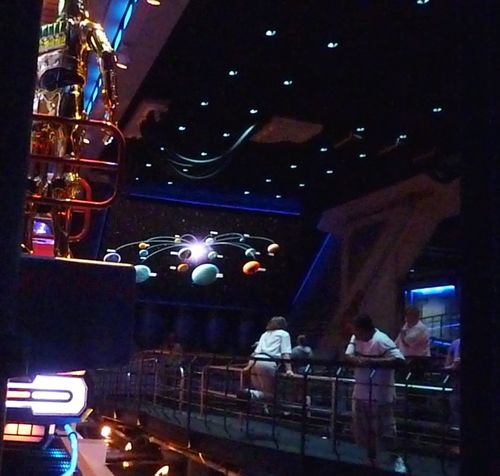 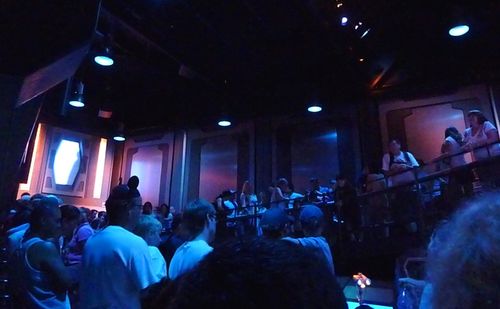 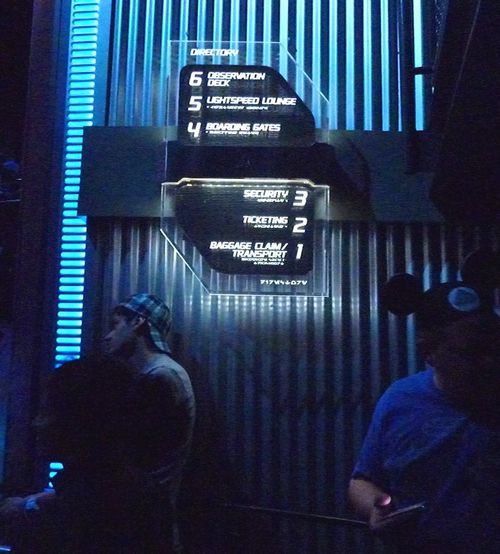 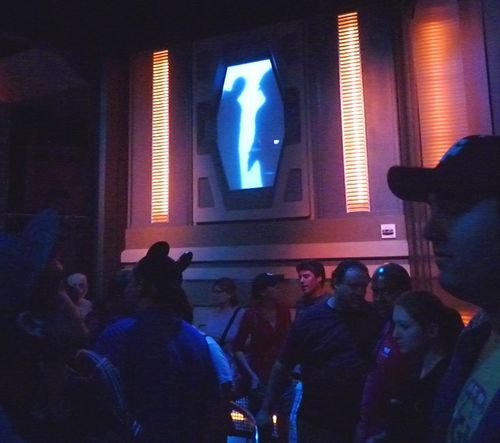 For Disney’s Hollywood Studios, the queue area for “The Adventures Continue” features the exact same winding path through a low-lit, slightly musty area, with a massive screen (updated with dazzling display technology) trumpeting the various tourist destinations available to you, the weary intergalactic traveler. We now have the StarSpeeder 1000 (this is a prequel after all), with C-3PO and R2-D2 welcoming guests and bickering like an old married couple. Why would robots be programmed to feel frustration? Anyway, the second room of the queue features the most “changes,” updated to appear like a bustling spaceport terminal, with droids preparing the day’s flights, while a silhouette display monitors various “Star Wars” characters heading off on their vacations, barely managing their luggage. Also situated in this area is a wiseacre droid who interacts with guests through the magic of a thermal screen, allowing sweaty, patient hordes an opportunity to observe themselves in the most unflattering light possible. The droid’s voice? Dear lord, it’s Patrick “I’ll take any job” Warburton. Gifted, experienced voice actors of the world, you have my sympathies. 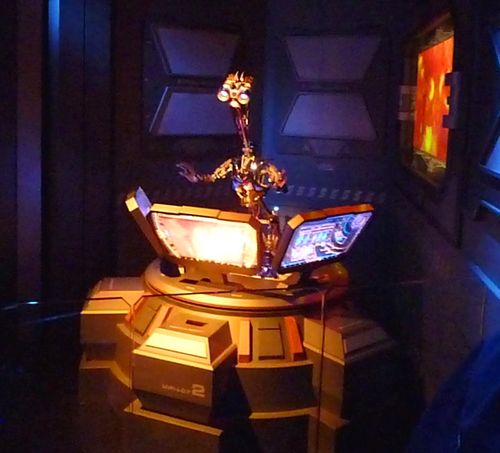 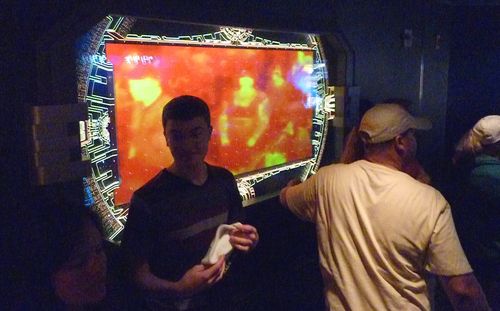 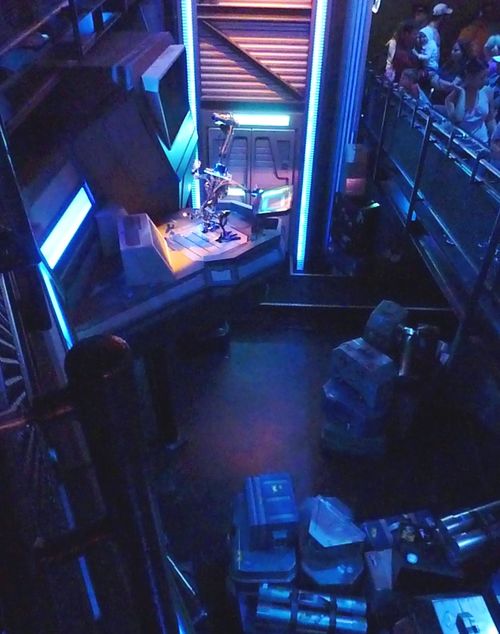 And remember old pilot pal Rex? Well, his services are no longer required. 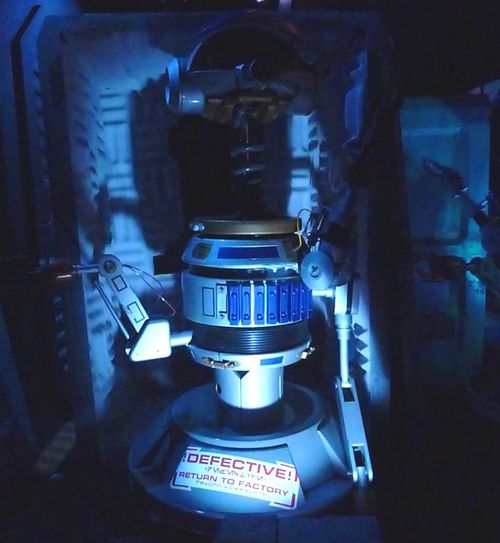 The final room is the boarding area, where guests are hustled into rows and urged to view CG-animated antics on overhead screens, which basically set up the plot for the ride. It seems that mainstay of robotic heterosexuality, C-3PO, has found himself plopped into the pilot seat on the StarSpeeder 1000, suddenly tasked with taking guests to their far off destinations. The usual behavior policies are then covered by a flight attendant droid (voiced by Allison Janney), again asking people to hold off on pictures and smoking, while the video itself is an amusing update of the old warning reel. The doors soon open and boom, off to a relaxing vacation on a peaceful planet. 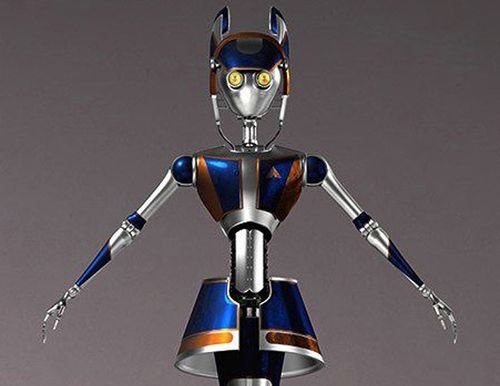 “The Adventures Continue” is a 3D extravaganza, which requires proper glasses to help the visual effects along. The spectacles are miles away from traditionally flimsy theme park frames, looking more bounty hunter than sunburned tourist, instantly giving the crowds a cool factor as the ride begins.

Once seated, belted, and offered one last “May the force be with you,” the ride comes alive, guided by a magnificent audio-animatronic version of C-3PO, who openly panics about his new duties, while R2-D2 (largely unseen) chirps his approval. Once the screen is revealed, it’s obvious that “The Adventures Continue” isn’t your father’s “Star Tours.” Faced with a bright, crystal-clear HD screen, populated with magnificently animated heroes and villains, the new “Tours” establishes itself as an immediate achievement. Gone is the scratchy film and tinny sound, replaced with a bold, 2011 sensorial experience, blessed with some of the smoothest, sharpest 3D visuals I have ever seen. 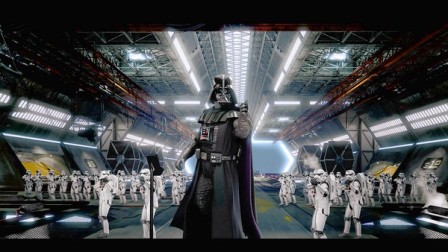 Outside of C-3PO’s hysteria, the story provided here actually concerns the inadvertent transfer of a stowaway rebel spy, with cabin cameras picking someone out of the slack-jawed crowd to personify the face of hope the Empire seeks to crush. A brief moment of creative interactivity keeps riders invested in the story, while offering a simple thrill of seeing mom or dad singled out as an intergalactic troublemaker.

The gimmick of the ride is variability, with multiple storylines to follow, taking the speeder to several destinations. Disney honchos claim 50+ alternatives, but we’re talking small changes here and there, not necessarily a massive assortment of unique visualized destinations. Still, the unpredictability of “The Adventures Continue” is genius, requiring fans to return to the speeder over and over on a rabid hunt for brand new visuals. I felt the geek rush myself, finding a simple trip to sneak in a single ride somehow turned into three visits.

“The Adventures Continue” breaks down into four sections: The Lift-Off (C-3PO bumbles his way into the stars), The First Destination (a chaotic planetary visit), The Transmission (the plot in motion), and The Final Destination (another planet and a bumpy landing). Each stop here has the potential be different with every outing, creating an undeniable energy of anticipation in the speeder, with crowds hungrily waiting for the next reveal.

For example: On my first experience an Imperial droid stopped the speeder just before launch to scan the crowd for the spy, we launched to the Wookie planet of Kashyyyk, received a transmission from Admiral Ackbar imploring us to protect the spy, and visited Coruscant for the big crash landing.

The second journey commenced with the speeder blocked by Darth Vader before launch (who uses his command of the force to swing us around), featured a trip to Tatooine for a pod race against cheatin’ bastard Sebulba, received a transmission from Yoda, and concluded with a visit to Naboo, where the 3D is put to miraculous test during the rough landing.

And yes, there are Gungans here. Fair warning, prequel pricklies, a few “Weesas” and “Meesas” are thrown around.

In fact, the most impressive element of “The Adventures Continue” is the full immersion into the world of “Star Wars,” with original music blaring, PT and OT iconography pasted everywhere (the whole thing seems barely canonical), and recognizable characters galore. It’s a “Where’s Waldo?” affair at times, with famous faces from both trilogies making appearances, sure to push some riders into a gamer mentality, calling out as many characters as they can. The community atmosphere for the ride film is extraordinary, providing a more satisfying attraction that plays into established delights. While the primary speeder-be-crazy experience is retained, “The Adventures Continue” feels more “Star Wars” in every way, served up to fans young and old, again permitting a chance to be a crucial part of the franchise instead of a passive observer.

Again, the 3D work is phenomenal, manufacturing a direct visual shot that’s not about sheer speed (an element decidedly lacking from the experience), but complete concentration. You will feel the sensation of flight, swerving between Star Destroyers, plunging into the depths of Naboo waters. The dimensional might is played daringly, but there’s plenty of comic material to fly in your face, including a superb accident on Kashyyyk where the speeder hits a warrior Wookie, leaving the furry beast stuck on the windshield for a few beats before sliding off, the faint sweat of his paws leaving a trail on the glass.

The near death of a beloved creature? Now it’s officially a star tour.

“The Adventures Continue” is a triumph for Disney and George Lucas, reawakening a classic but stale ride with a secure rejuvenation, elevating the motion simulator experience to a new level of eye-spinning potency. “Star Wars” takes a new breath of life with this attraction, and it’s an absolute treat. It appears there’s still plenty of force to fling around in this franchise.