I’ll give the Korean production “Chawz” this much: it definitely aims to please. An overlong, underfunny horror picture about a rampaging mutant boar, the picture has difficulty translating frantic fits of performance and slapstick into a crisply executed feature film, wasting a delicious premise on two protracted hours of stillborn silly business, tickling a screen concept that needs to play as lean and mean as possible.

When his job as a cop grows stale in Seoul, Officer Kim (Eum Tae-Woong) is reassigned to the countryside, sent to a village where criminal activity is nonexistent. Dealing with a community of demanding farmers, witches, and fellow cops, Kim is bewildered by his surroundings, unable to properly settle in with his pregnant wife and mentally ill mother. Trouble soon comes calling in the form of a mutated boar, which has amassed a considerable body count and disrupted a critical harvest period. When esteemed hunters (Yoon Jae-Moon), elders (Jang Hang-sun), and scientific researchers (Jung Yu-Mi) are unable to kill the beast, it’s up to Kim to lead a posse into the mountains, hoping to locate and slaughter the boar before it causes further destruction.

An elaborate homage to Spielberg’s immortal classic, “Jaws,” “Chawz” takes special care with character introduction and setting, patiently pulling viewers to an idyllic space of rural Korea to observe a village of clowns and concerned citizens growing increasingly impatient with local efforts to halt the progress of an oversized terror threatening their livelihood. Instead of Brody, Hooper, and Quint, “Chawz” presents Officer Kim and his team of hunters and scientists, determined to bring the monster boar down, though unsure of what exactly they’re up against. If “Chawz” sounds scary, I assure you it isn’t. Director Shin Jeong-won flirts with a suspenseful tone of animal rampaging, but the picture plays largely comical, resembling a “Three Stooges” experience at times, highlighting Officer Kim’s interactions with his buffoonish co-workers. The silly atmosphere of the film isn’t completely unappealing, but it’s never legitimately funny, with one-liners and visual gags dying left and right, working uphill to generate a few gut-busters in a film also featuring a mutant boar splattering the innards of his victims all over the countryside. It’s a darkly comic tone the filmmaker never nails, rendering “Chawz” unfunny and unremarkable, with a few overly anxious performances downright painful to behold.

It’s interesting to watch “Chawz” take such time with characterization, making sure this roster of boar hunters offers something more personal than simple screen bravado or outlines of fear. However, the steady exposition wears the feature down, dragging out events past their expiration date, with much of the superfluous personality acting more as padding than enticing development of this oddball world. Perhaps the filmmaker figured these folks were worthy of extended screen attention, to understand the frustrations that go beyond simple monster madness. The finished film doesn’t reflect that endearing effort -- “Chawz” could’ve easily dropped 20-30 minutes without harm, tightening the action and antics to a more direct shot of genre delights. 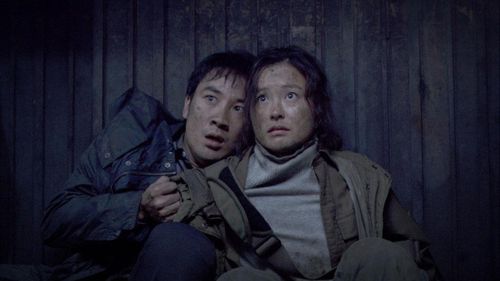 The AVC encoded image (1.85:1 aspect ratio) presentation provides a highly processed look to “Chawz,” removing any trace of cinematic texture. The overly contrasted image pulls detail out of the frame, diluting the impact of the colors and the gore, losing the vivid appearance of the locations and the creature itself. Also disappointing is shadow detail, which often appears murky, clouding up evening sequences and needed detail. Clarity is mediocre, displaying more of a soft image that services the lighthearted tone of the picture, but rarely digs into textures. Skintones are bland, almost colorless. It’s a very cold, unnatural look to a film that explores varied environmental suspense.

The 5.1 DTS-HD sound mix provides a frontal blast of activity emerging from the horror elements of the story, with boar attacks offering a rumbling state of low-end intensity. True dimension isn’t employed to the fullest extent, keeping much of the action unified to generate shock, with only a few stalking scenes feeling out a convincing directional momentum. Dialogue is clearly executed, with voices sounding satisfactory, well mixed with scoring cues to assist in the comedic excursions. It’s not a subtle track by any means, with the fine edges of behavior and atmosphere lacking a true audio snap. However, intensity is felt when the film finds its focus. An English Dubbed mix is also included.

"Making Of” (60:09) offers a dry, but satisfying look at the creative process, with cast and crew interviews recounting varied experiences during production. It’s actually a shock to learn most of the film was shot outside of San Francisco to achieve a specialized forest environment, with ample BTS footage provided to observe the energized construction of scenes. Character motivation, tonal uncertainty, and special effect execution are also discussed. It’s not the most exciting assemblage of footage, but there’s a wide range of topics covered, sincerely dissecting the making of the picture.

“Deleted Scenes” (9:39) return some depth to Officer Kim’s life before and after his move from Seoul, reinforcing his domestic troubles and inability to fit in with his new surroundings. There’s also a little more mayhem with the wild boar, seen here interacting with a local boy.

“Q&A Sessions Premiere Event” (3:49) is a brief introduction from the cast and director at the movie’s premiere, dusted with a little humor and a lot of flashbulbs.

“Blooper Reel Poster Shots” (4:12) offers footage from the poster photo shoot, where the cast gathered to clown around for the cameras. Interestingly, nothing from this session ended up on the BD cover art.

And an International Trailer has been included. 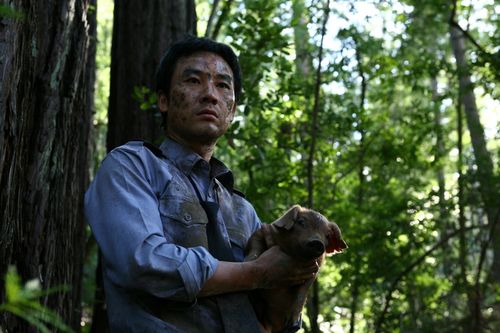 The second half of “Chawz” takes to the hunt, following Officer Kim and the team as they attempt to locate and destroy their vicious enemy. What should be a curious climatic mix of tension and shock is flattened by the film’s sluggish pace, making the final attack on the beast more welcome as an genuine end to the movie instead of a ripping closer to a breathless adventure. “Chawz” has the raw ingredients to become a wicked ride, but the execution consistently pins the movie down. For a ferocious mutant boar movie, a glacial pace and noodle-ish funny bone seems antithetical to the proper monster movie cause. 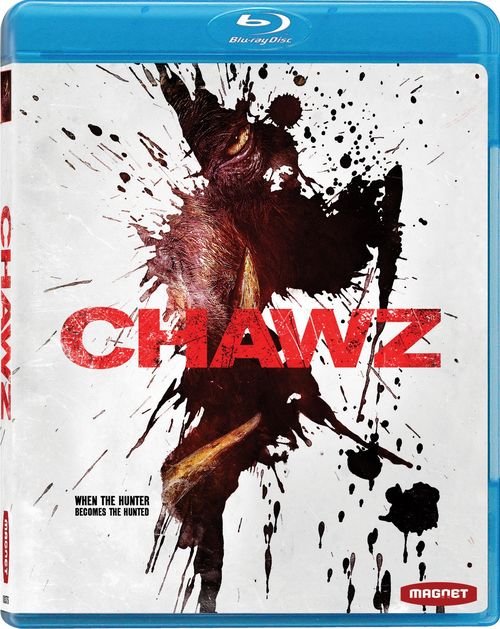