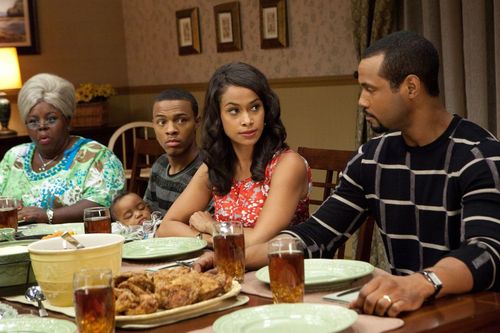 Within the first 10 minutes of “Madea’s Big Happy Family” a doctor is groped, the lead character is handed a cancer death sentence, and perennial boob Mr. Brown (David Mann) threatens to beat a woman. In other words, it’s business as usual for writer/director Tyler Perry, last seen slinging Oscar bait with the sobering drama, “For Colored Girls.” Receiving a frosty response to his “mature” motion picture, Perry has hurriedly returned to the cross-dressing comfort of Madea, slapping together a half-finished vehicle for his most popular character. It’s back to threats, stress, and Jesus, with this latest film a slapdash, tedious reworking of old business.

Given mere weeks to live after dealing with cancer for years, matriarch Shirley (Loretta Devine) is looking to gather her family for a peaceful dinner to share the news. Unfortunately, the clan is in disarray: teen Byron (Shad “Bow Wow” Moss) is fresh out of prison, struggling with his pushy girlfriend (Lauren London) and venomous “baby mama” (a repellent Teyana Taylor); Kimberly (Shannon Kane) is lost in rage, unable to communicate peacefully with husband Calvin (Isaiah Mustafa); and there’s Tammy (Natalie Desselle), another angry woman, married to pushover Harold (Rodney Perry), raising two disrespectful kids. Unable to cope, Shirley relies on pothead Aunt Bam (Cassi Davis) for support, while asking relative Madea (Tyler Perry) to round up the kids in her own special way. 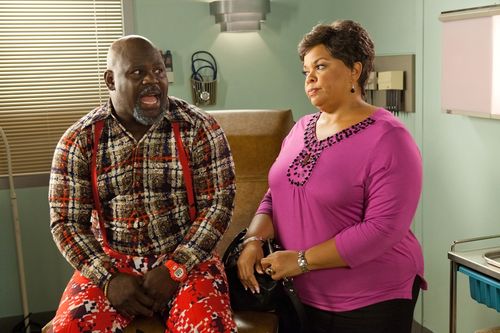 “Big Happy Family” is actually Perry’s sixth Madea film, successfully turning the fringe player from “Diary of a Mad Black Woman” into a superhero of sorts, rolling into her own franchise, armed with one-liners, an iffy grasp on the English language, and clenched fists. The bewigged force of nature swings her pendulous breasts harder than ever before in this new picture, which feels woefully underwritten (if Perry is capable of such a thing), requiring the questionable antics of this steamrolling problem solver to prop up the picture, with the filmmaker trusting a few scoops of Madea will make up for the noticeable lack of substantial drama.

Adapted from Perry’s play, the film version of “Big Happy Family” retains the sheer volume of its theatrical origins, with every character screaming at the camera, hoping to make themselves heard. The effect is instantly nauseating, though a pardonable offense if these vague personalities actually had something sincere to share. Instead, the film is awkwardly episodic, moving from sibling to sibling without connective tissue, playing unspeakably broad like a bad sketch television program. 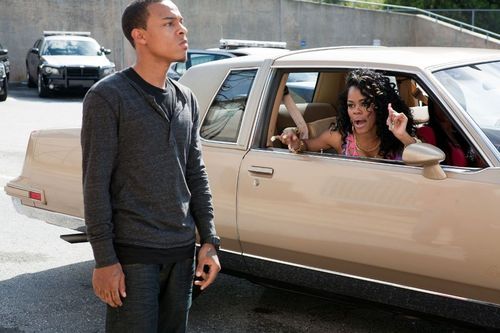 The introduction of Aunt Bam is indicative of the “Big Happy Family” viewing experience, with Perry pushing an unknown character into the mix to make cheap jokes for extended periods of time, sandwiched between bouts of profound trauma. Not only is there cancer to deal with, but rape and martial dissolution as well, making the erratic fits of comedy all the more unwelcome. Though it’s curious to see Perry sneak into Cheech and Chong territory with the wheezy, smoky Aunt Bam, a more unifying course of action would’ve resulted in a coherent motion picture. Instead, the movie sprints around blindfolded, reheating old bits to please the faithful.

Criticizing Perry for this insipid Madea business is fruitless, but what rankles me the most is the acceptance of violence as an answer to life’s problems. Kids giving you lip? Beat them. Loved one sassing back? Beat them. Perry’s trick is to woo with universal frustrations, stir with comedic violence, and pave it all over with empty religious posturing. It’s such a crock (let’s not bring up the picture’s misogyny), but there’s undoubtedly an audience for this stuff, eager to watch Madea dispatch everyday problems using her man-in-a-dress fury. Hopefully, the toxic undercurrent to these films isn’t making an impression. 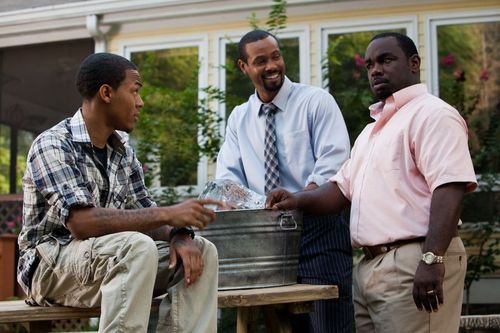 “Madea’s Big Happy Family” attempts to tie up all the loose ends with a confessional climax, but it’s an erratically edited conclusion, messing with continuity and destroying what passes for emotional upheaval in this cartoon. Unable to provide a suitable closer that respects authentic character development, Perry takes the action to the “Maury Povich Show,” handing the last five minutes of the film to a crude joke about paternity test results. Mere moments earlier, the particulars of a rape were revealed. These movies should come with a seat belt. A pair of earplugs and sunglasses would be nice to have too. 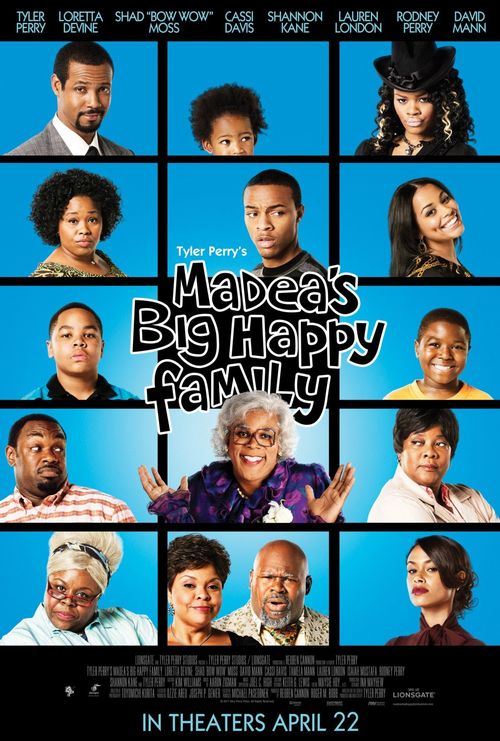 Wouldn't it be easier to write "I hate black people!" Save yourself some time.

I can't believe how racist you are.

Today, Tyler Perry will wake up and continue his Heavenly work providing special movies for US.

YOU will wake up and endure another day of Hell, making a meager living off the talents of other.

TYLER PERRY DOES IT AGAIN!

Tyler Perry is 1000 times greater than you. He's so smart and funny. Your a nothing jerk who doesn't know anything about movies.

Stop hatin. get a life.

i wish madea would beat you

These fecal smearings you call writing remind the public at large that you are a moron and will always be a moron.

Indeed, Tyler Perry has done it again and will continue to to it again. I'm happy to contribute to the box office take.

White man, stop the madness. Let somebody else review these movies. Somebody African American. Somebody smart.

Tyler Perry has love in his heart for you Brian. He forgives you for this ugly movie review.

I will pray for you tonight.

Another cracker trying to bring the black man down.

Ugh, the race card. We don't hate the movie because it's oriented towards the African-American race. We hate it because it takes every negative stereotype and treats the film seriously. Plus, it's one of those films were every actor/actress has to scream. I mean, c'mon.

By the way, to those thinking I'm a "hater", I enjoy Spike Lee movies. "The Inside Man" was a great heist film, plus Spike Lee doesn't isolate a certain race; there's Denzel Washington (African-American), Clive Owen (British), and Jodie Foster (American). Tyler Perry should be ashamed of himself for beating up on a visionary like Lee.

Go see a Spike Lee movie. Or, shit, a Martin Lawrence movie for that matter. It'll be a step up.