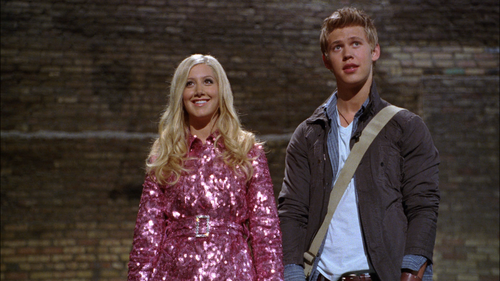 A few years back, I was pushed into seeing the “High School Musical” movies, and, boy howdy, I wasn’t looking forward to the assured sensorial punishment. The trilogy turned out to be a charming, jaunty experience, teeming with happy feet and fresh-faced young talent, kicking up a Disney Channel-approved storm that, while outrageously broad, provided the essentials in terms of tween melodrama. While Vanessa Hudgens is out there appearing in awful movies (“Beastly,” “Sucker Punch”) and Zac Efron looks to butch up in indie cinema, Ashley Tisdale is perfectly content to continue on with her own starring vehicle, once again taking command of Sharpay as she looks to make her mark on the Great White Way.

Creating a sensation in Albuquerque theater, Sharpay (Ashley Tisdale) is ready for the big lights of Broadway. With her parents’ blessing, Sharpay chases an invitation to star in an upcoming musical, thrilled with the opportunity to share her genius with the world. However, when the acting offer isn’t quite what she imagined, Sharpay is forced to rough it in New York City, attempting to wrangle pet dog Boi a spot in the show, opposite stiff competition from pre-teen Roger (Bradley Steven Perry) and his trained pooch. Facing the wrath of star Amber (Cameron Goodman) and a tender friendship with film student Peyton (Austin Butler), Sharpay is left a stressed, confused pile of pink, fearing her dreams will never come true. 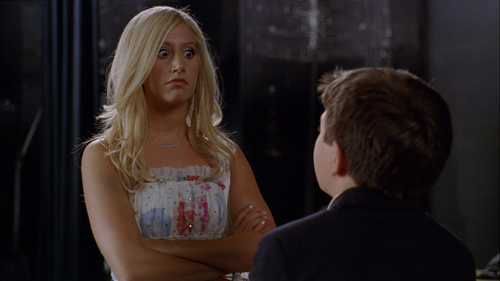 Cleaving away the cast of “High School Musical,” the new film is strictly the Sharpay show, highlighting the aspiring actress’s brutal entry into backstage politics and competition, keeping to the basics of the character’s relentless vanity and ego, piercing qualities successfully stretched to 89 minutes of screentime by writer Robert Horn. It’s a thin film, but one of pleasant comedic drive and unexpected snap, with Sharpay successfully landing a new collection of foils and folly as she shoves her way to Broadway stardom, facing the last thing she ever expected upon arrival in New York City: Subservience. 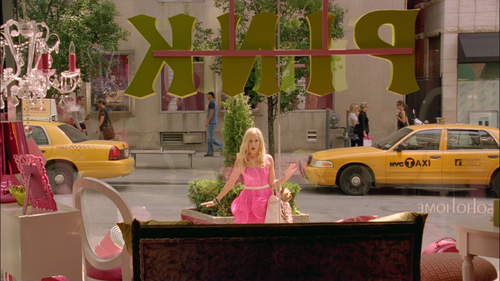 Dealing with miserable apartments, demanding stars, Roger’s persistent mischief, and Peyton’s puppy-dog attention, Sharpay burns through a conventional routine of setbacks, though it’s pleasing to see Tisdale giving the role needed pucker. This is her fourth time embodying the glammy blonde terror, and while Sharpay’s antics are predictable, Tisdale digs her nails into the role, giving tepid punchlines and cartoon reactions a satisfying velocity. The supporting cast makes for a reassuring range of troublemakers and fussy Broadway types, generating a compelling swirl of personalities that challenge our heroine. Nevertheless, it’s a lost cause, simply because this is Tisdale’s shining moment. She’s amusing and frightfully assertive, while successfully elongating Sharpay’s wrath and redemption to feature-length requirements.

And, for the curious, I’m sorry to report no major players from the “High School Musical” world return to cameo in this spin-off. Though Lucas Grabeel, who played Sharpay’s brother Ryan, contributes to the soundtrack. 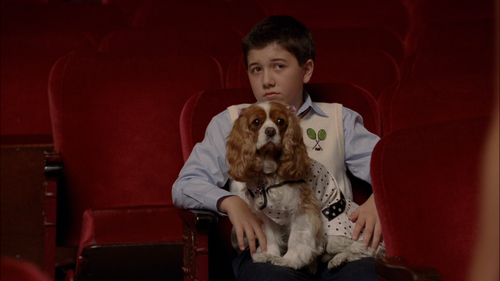 Colors are hot during the AVC encoded image (1.78:1 aspect ratio) presentation, with hues of all potency popping superbly during the film. Costumes are especially intense, with Sharpay’s signature pink creating a vivid image impression, while city particulars also retain an evocative brilliance. Skintones are natural, while shadow detail is supportive, giving stage encounters a crisp feel of darkness. Clarity is strong throughout the film, sustaining gigantic facial reactions and interior textures, while marquees and street encounters give off a hearty urban feel. Though shot for the small screen, the feature offers a worthwhile visual kick, making Sharpay’s world as vivid as can be expected.

The 5.1 Dolby Digital 5.1 sound mix finds an iffy middle between tinny dialogue exchanges and powerful pop music. The verbal encounters are crisp, but lack a lush presence to accompany the heated emotions. Exposition is understood, but some of the more comedic encounters sound a little harsh. The musical numbers offer dimensional heft, feeling out the surrounds with a circular stage presence and moderate lower-end response. Scoring is soft, finding more of a white noise position. Atmospherics for street scenes are convincing, while stage echo is compelling, summoning a plausible feeling of distance. French and Spanish tracks are also included. 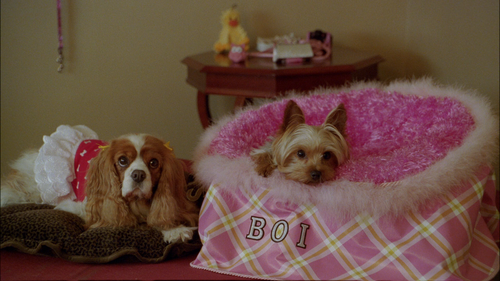 “The Evolution of Sharpay” (8:57) chats up Tisdale, who discusses her character’s arc throughout the “High School Musical” franchise, and her feelings about the latest adventure. An enormous amount of clips are employed to provide examples of Sharpay’s chirpy growth.

“Bloopers” (1:22) present a brief display of mix-em-ups, most emerging from Tisdale’s dealings with the dog portraying Boi, and his penchant for biting hats and fidgeting.

“Austin Cam” (7:00) surveys the footage recorded by actor Butler, whose character carries a camera around for a large portion of the movie. Inadvertently capturing the filmmaking effort in the background of his “shots,” the featurette successfully communicate the mood of the set and the playfulness of the actors. 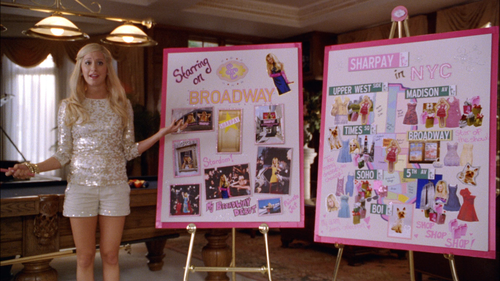 The musical numbers are surprisingly limited to only a few stage efforts, which is a blessing considering how satisfying the movie is without song and dance. Though frivolous, “Sharpay’s Fabulous Adventure” is an enjoyable romp with everyone’s favorite pampered princess, delivering limited antics with a great deal of charisma. 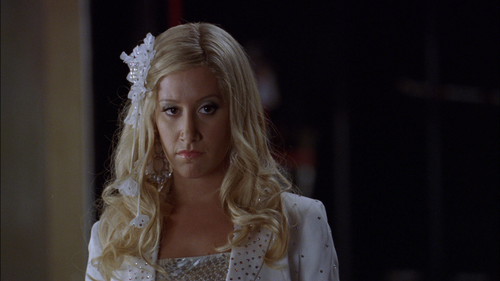 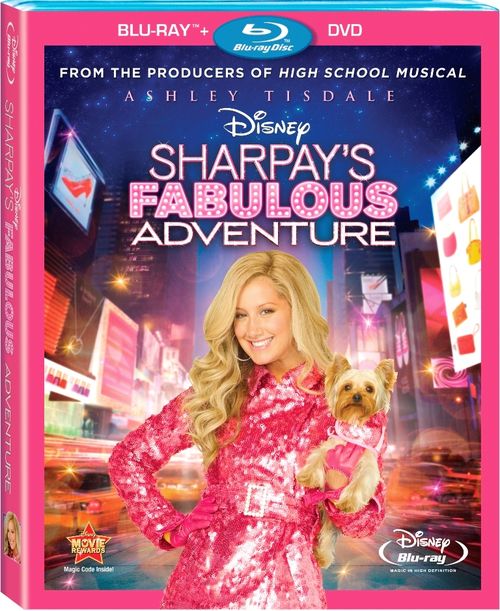