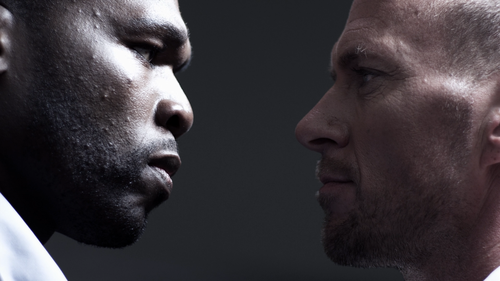 The box art for “Blood Out” trumpets the participation of Val Kilmer, Curtis “50 Cent” Jackson, and Vinnie Jones, though these men are hardly in the film. The true star is actor Luke Goss, who’s built a career for himself as a poor man’s Jason Statham, accepting roles as a buzz-cut bruiser in a myriad of DTV product, working hard to look cool in motion pictures that are nearly comedic in their ineptitude -- the highly ludicrous “Blood Out” being the latest to join his career hall of shame.

An aggressive cop, Michael (Luke Goss) is devastated when he receives word of his gangbanging brother’s murder, occurring in the presence of crime boss Elias (Tamer Hassan). When the local detectives (Curtis “50 Cent” Jackson) blow off the investigation, Michael takes the law into his own hands, tatting himself up and pledging the same gang as his sibling, looking to work his way up the criminal ladder. Instead of achieving immediate retribution, Michael finds an elaborate network of evil activity, with Elias a mere stepping stone to the big bosses, Zed (Vinnie Jones) and Arturo (Val Kilmer), two men looking to take over the world with their communities of crooks and thugs. For Michael, his vengeful plan finds renewed urgency when he discovers his brother’s pregnant fiancée is caught in this horrible web of villainy. There’s not an ounce of originality to “Blood Out,” and I think director Jason Hewitt knows it. Barreling forward as a monotonous DTV diversion, Hewitt orders up clichés and cameos to survive his directorial debut, creating a tedious actioner that toys with flashes of absurdity to create a personality it doesn’t otherwise possess.

“Blood Out” is a story of street gangs taking over the world. Instead of rough, young degenerates fulfilling every hip-hop fantasy imaginable, the script concerns the actions of a few fortysomething Caucasians who look like they’ve spend most of their day inside a gym, not terrorizing rival turf. Hewitt’s pushing for grit here, painting tattoos all over his cast and staging a beating about every ten minutes, using the warfare to sell some soundtracks, with “Blood Out” teeming with the worst rap music I’ve encountered in a film to date -- real gangsta slush with abysmal kindergarten lyrics that would make Afrika Bambaataa weep. It’s a routine of pain covered with hacky camerawork as well, with ample shaky-cam and useless split-screen stepping in for true directorial ambition, creating a pedestrian music video atmosphere that quickly torpedoes whatever integrity the script was planning to share.

And the feature’s sense of humor? Jackson plays a detective with the “G-Unit” squad. Yeesh. The AVC encoded image (1.78:1 aspect ratio) presentation submits a limp sense of shadow detail, with nighttime incidents looking somewhat muddy, with contrast issues removing a rich sense of detail. The color palette has been drained, but the image holds to a few hues (reds are boosted), offering competent separation. Skintones blend into the overall bloodless appearance of the film, though clarity is generally workable, capturing the textures of the crooks and the Louisiana locations. Facial reactions benefit the most here, with Goss’s wrinkles and McCord’s make-up supplying some interesting HD detail. Costumes and tattoos are also easily read, contributing to the mood.

The 5.1 DTS-HD sound mix captures a thinness to dialogue exchanges that’s distracting at times, failing to supply a needed dramatic weight. Exposition is understood and comfortably frontal, but there’s a tinny quality that’s unappealing, especially when slammed up against the soundtrack cuts. The music provides some thump, but not enough low-end might to convince. Directionals are limited to club environments and violent bursts, with group sequences handing the track a proper sense of dimension. 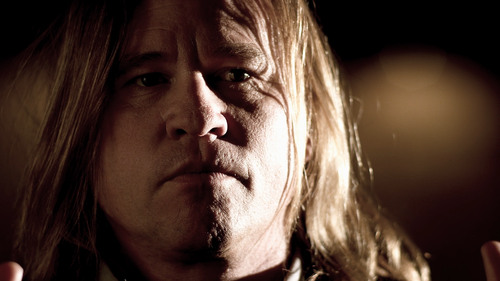 “Behind the Scenes” (16:56) is a customary making-of experience, with cast and crew interviews glumly detailing the plot and the casting process. Many platitudes are thrown around (and extended film clips), presenting Hewitt as a filmmaker clearly delighted with his effort. There’s not enough BTS footage to satisfy, with much of the featurette devoted to paid professionals expressing how wonderful the film is.

And a Trailer is included. 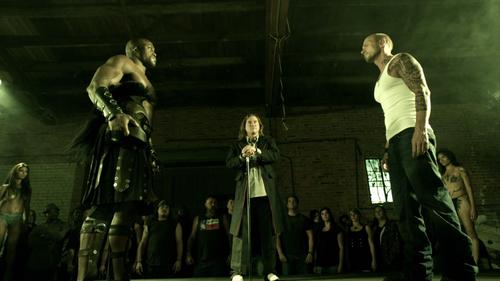 Just when “Blood Out” couldn’t possibly get sillier, Hewitt dives into the deep end with the grand finale, bringing in Arturo (Kilmer is understandably bored out of his mind) and Zed, who arrange a warehouse gladiatorial contest to decide the fate of the world’s gangs. Wow. I honestly didn’t see the resolution to “Blood Out” coming, which is a pleasant surprise. Too bad the jolt is burned off instantly, as Hewitt swiftly returns to his regularly scheduled business of utter moviemaking banality. 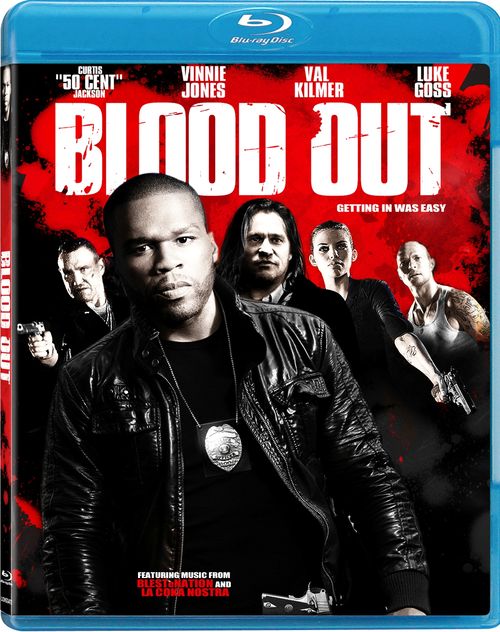