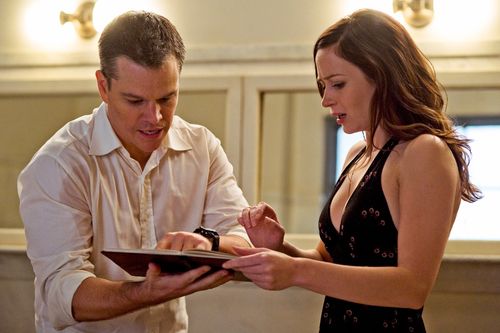 The struggle to retain free will takes a strangely spiritual turn in “The Adjustment Bureau,” a generally lively film that plays with questions of self while sprinting through a Philip K. Dick theme park of the unreal and the intimidating. Think of it as “Love Story” meets “Total Recall” and “Dark City,” which doesn’t quite do justice to the moviegoing experience at hand, but comes close to describing the idiosyncratic, highly cinematic world writer/director George Nolfi generates here for his filmmaking debut.

David Norris (Matt Damon) is an aspiring politician looking to climb his way up the Washington ladder and make a difference in the world, despite his occasionally reckless personality. On the eve of his greatest public failure, David meets Elise (Emily Blunt), a spirited dancer who sparks immediate chemistry with the fallen man, only to scurry away after making a profound impression. When they meet again by chance, David seizes the opportunity, attempting to woo Elise for good. Unfortunately, this pairing interferes with a plan of fate set by The Chairman, who oversees humanity via assistants known as The Adjustment Bureau -- a group of formally dressed men out to correct deviations in the master plan of life, sent out to stop David and Elise from falling in love. Made aware of their presence by a sympathetic employee (Anthony Mackie), David sets out to protect his future by challenging the mysterious system. 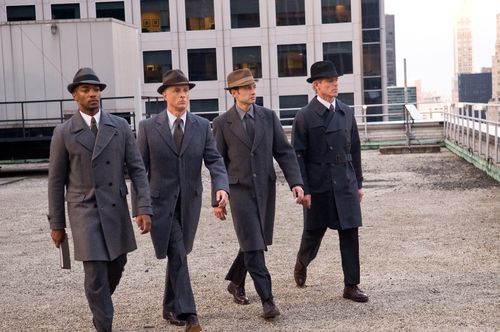 “Adjustment Bureau” is an odd film, but Dick was an ingenious writer, penning this short story in 1954, which has been exhaustively reimagined for its big screen debut. Nolfi (who previously co-scripted “Ocean’s Twelve” and “The Bourne Ultimatum”) pushes for a more emotional connection, softening the chilly nature of the tale with a pronounced sense of humor, while encouraging his gorgeous stars to make blissful music together as David and Elise fiddle around with their highly unusual courtship. It’s a story of love and paranoia, wonder and choice, asking provocative questions of humanity while sustaining a rousing sci-fi edge. Nolfi deserves plenty of credit for keeping “Adjustment Bureau” as tight and endearing as it is for the first two acts, creating a needed reminder of humankind to balance out the mystery of the antagonists and their cryptic guide to life.

“Adjustment Bureau” is a stylish picture with terrific costuming ideas that place the perhaps heavenly agents in garb associated with a 1950’s insurance salesman, giving the growing menace a deliberate feel of an outdated corporation -- an angelic “Mad Men” gathering of snappily dressed hunters who study leather-bound books of fate, imagined here as electronic subway maps of destiny. The look of the film is elegant, wise with NYC locations, and rich with glamour, making the actors look good as the script requests increasingly feverish reactions. Thankfully, there’s a fantastic ensemble gathered here to fill out the fantasy, with Damon and Blunt generously sexy and playful as the targeted couple, madly dashing to avoid a cruel separation as the Bureau plays a few dirty tricks to keep the obsessed candidate in line. Also winning are the men in blue, with Mackie unexpectedly sensitive as the true believer of the Bureau, while John Slattery is effectively comical and stymied as the senior agent sent in to clean up David’s interaction with the relentless spoiler known as chance. 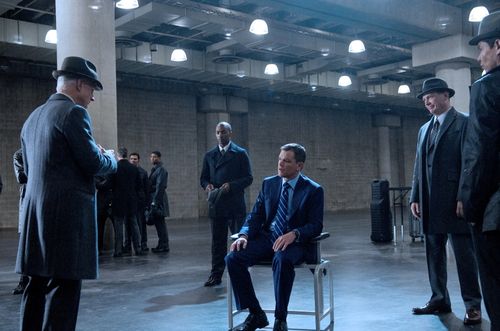 Also pleasurable is Terence Stamp, who doesn’t need much in the way of dialogue to slip into his commanding role as the Bureau’s hitman, a ruthless agent sent to hurt David where it counts the most. Stamp brings precise regality and iciness to the supporting role, permitting the film an extra layer of authority.

Nolfi handles exposition wonderfully, teasing the audience with bits of godly reveal, keeping the origin of the Bureau playfully ambiguous, opening the group’s true purpose to interpretation. Unfortunately, once the film fully takes to the art of the chase, it runs out of gas, looking to mount a dazzling, portal-leaping conclusion at the very moment the end credits should be rolling. Nolfi doesn’t know where to end the feature, which elongates an otherwise spry thriller. Still, there’s enough substance and suspense to devour, making the picture an entertaining puzzle with a satisfying command of human need. 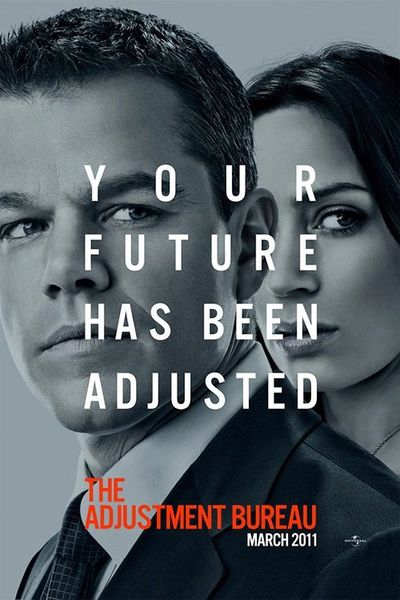